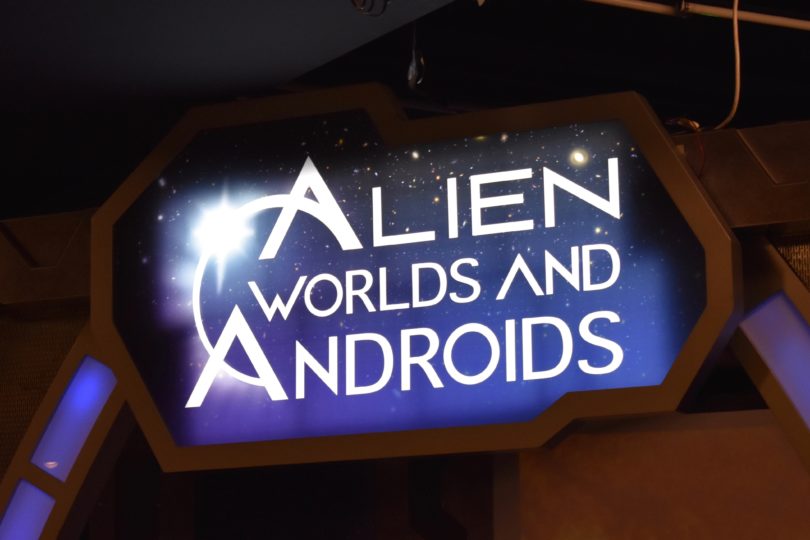 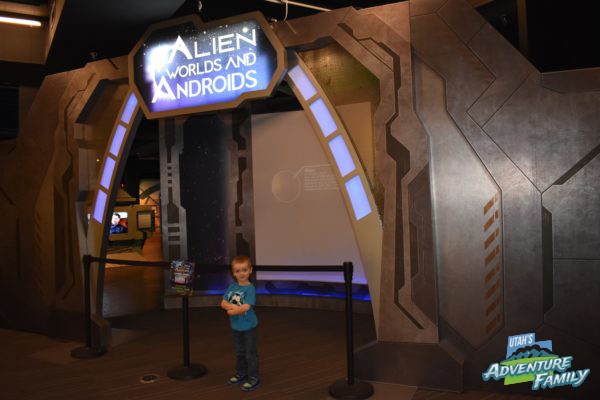 Leonardo in SLC has a new exhibit to go see. It’s called Alien Worlds and Androids. We got a sneak peak of this fun new exhibit that opens January 28 and runs through May 6. This exhibit addresses the question, Are we alone in the universe? There are displays about alien life in outer space, under the sea, and even in our own bodies.

My four year-old and I visited this exhibit one day while everyone else was at school. We had so much fun with all of the hands-on displays. We love The Leonardo for how interactive everything is. The exhibits in this museum allow children so much exploration, and they learn while experiencing things. The Alien Worlds and Androids exhibit is much the same. There are video screens explaining the science behind a lot of the “aliens” displayed or mentioned in the exhibit. There are also some really fun hands-on activities that relate to the science talked about in the videos. 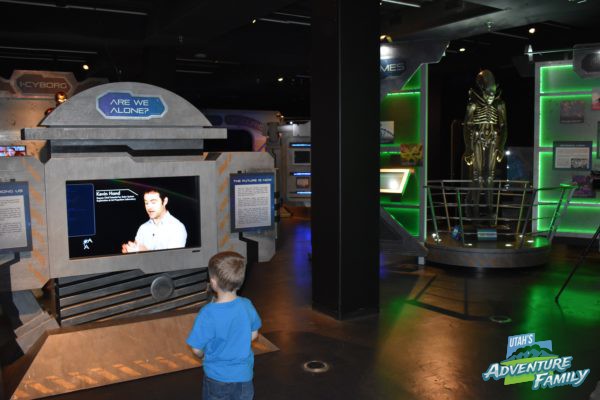 I loved the video screens. While I was reading the information, my son watched the videos. It was perfect. 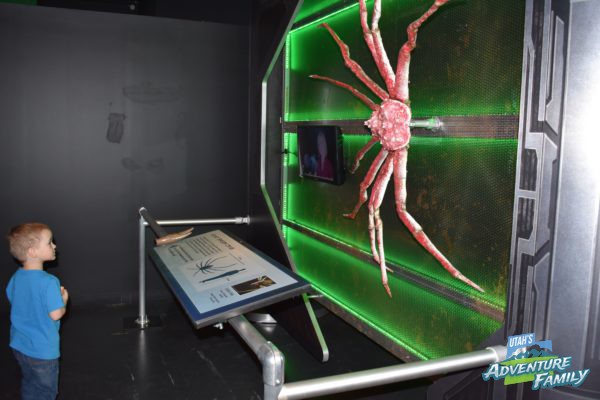 The crab spider is like an alien that lives under the sea. 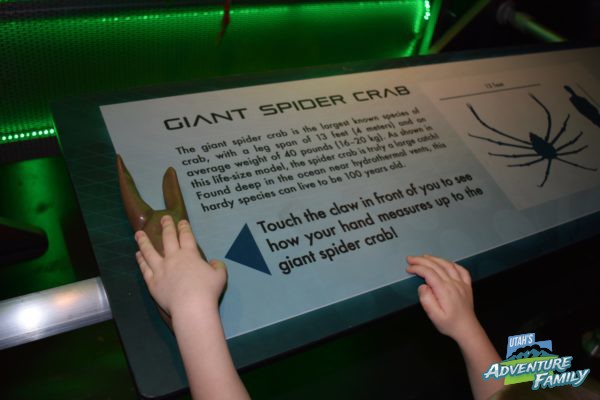 We were amazed at how huge their claws are compared to four-year old hands.

We really enjoyed making circuits that helped a robot moved. We also enjoyed riding in the Mars Rover as we landed on Mars. My son’s favorite activity was controlling the robot arm and trying to pick up foam blocks. He was horrible at it, but he thought it was so fun. I really liked seeing how long it would take to get everywhere in a car, plane, or star ship from the future. 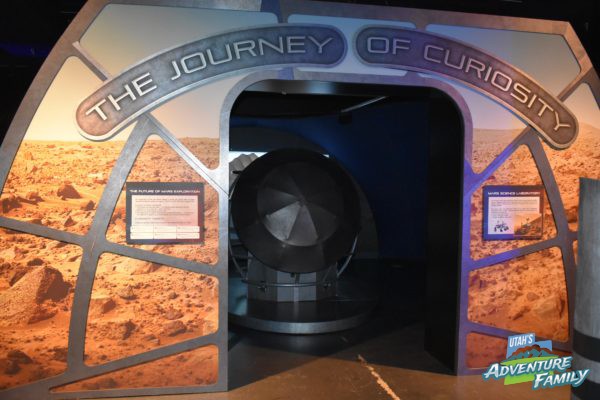 Inside the Journey of Curiosity, you can be part of the Mars Rover landing! 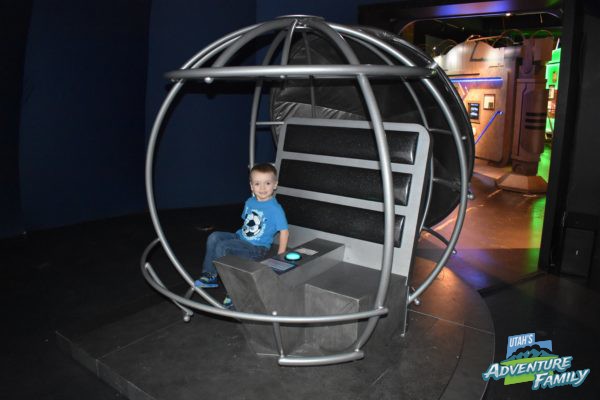 You sit inside this little contraption and it shakes a little bit while you watch the Mars Rover landing. 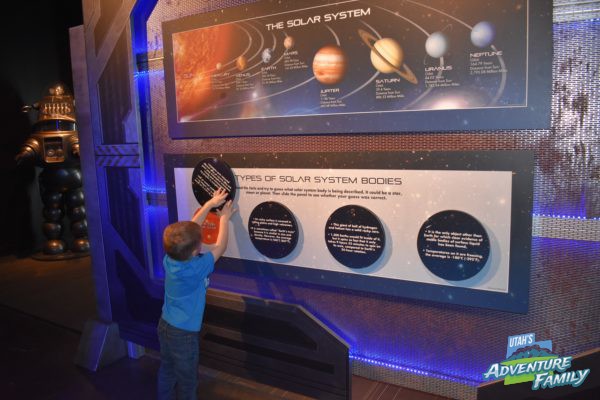 We love learning about the planets and outer space. 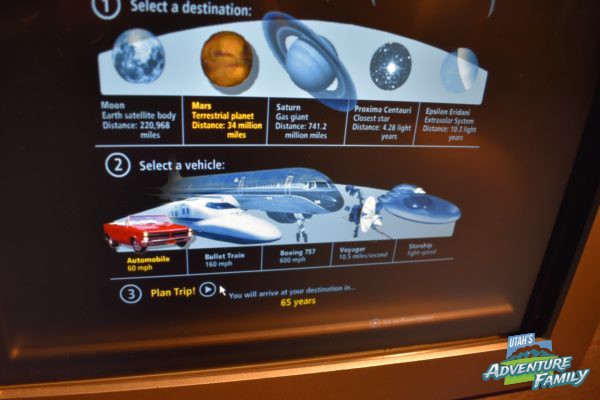 This was my favorite screen to play with–it would take a long time to get to Mars in a car. 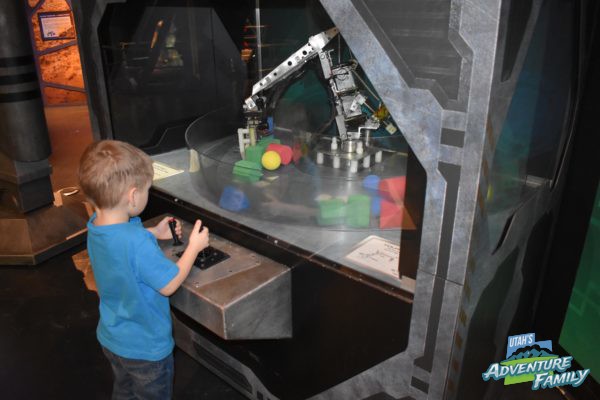 The robot arms were fun, too. Challenging, but fun!

The most popular part of this exhibit takes a look at Hollywood films. There are displays of Ironman, Terminator, and Star Wars. We loved seeing these iconic figures here in Utah! 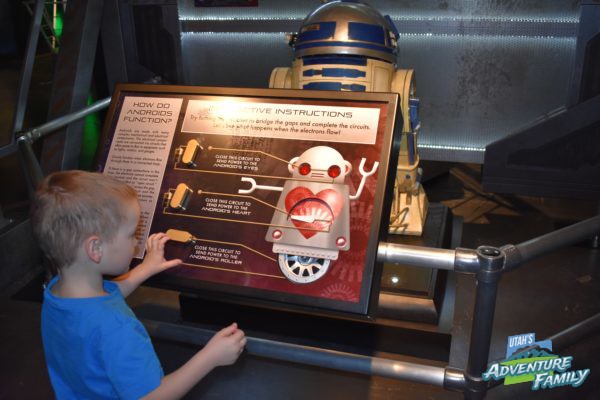 Completing the circuits to make this little robot move and light up was really cool. 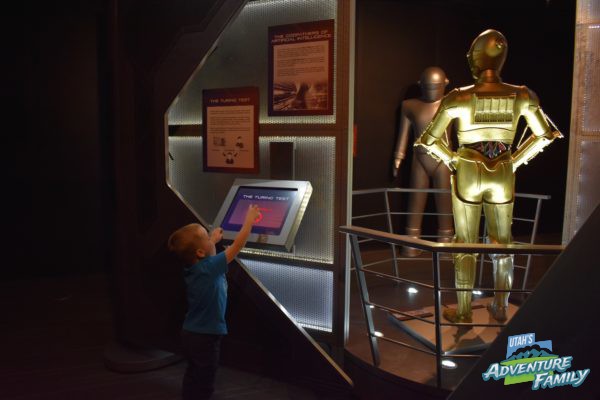 There are lots of fun things to see and interact with. And there’s C3PO. 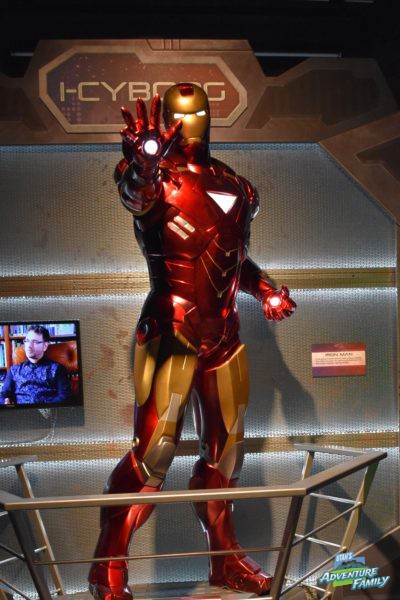 I think IronMan was the most photographed item in the display.

We spent about an hour exploring the Alien Worlds and Androids exhibit, and then we played for a few more hours in The Leonardo. There are huge bins of Legos with pieces we have never seen before, so we built a spaceship with Legos, and then played with the green screen. The exhibit called Flight is still there, and we hadn’t had a chance to see it. It is another great reason to go visit right now because there is a huge plane that the children can go inside and pretend to fly. There are also lots of fun flight activities and we spent a good portion of our time in this exhibit, too. 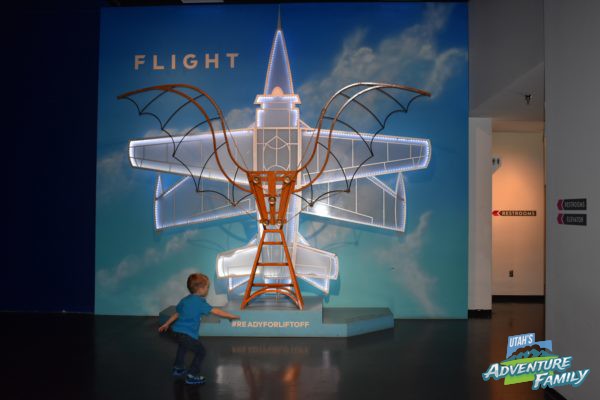 The Flight exhibit is amazing! 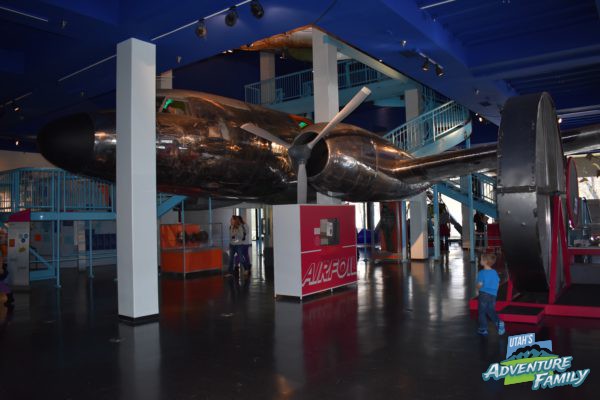 See that plane? You can go inside. 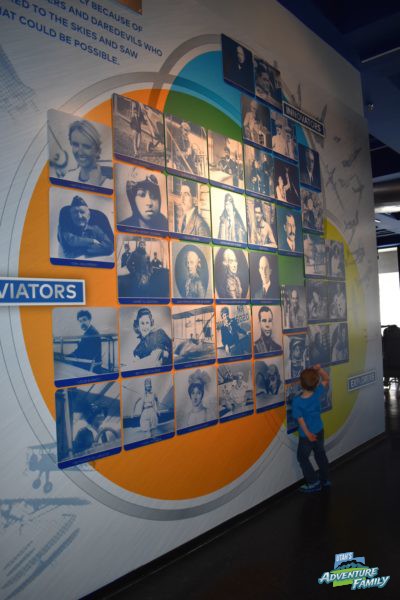 There are a lot of famous pilots and astronauts on this wall. 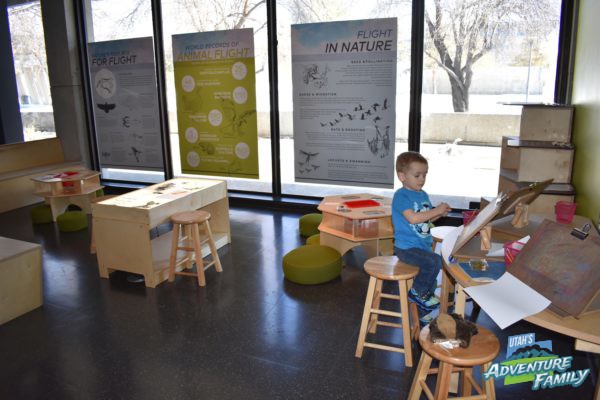 We love that The Leonardo has spaces for younger children, too. Here you can read books, color, dress like a butterfly, and more. 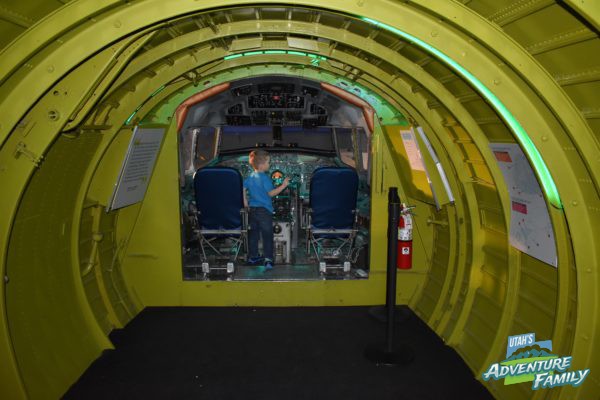 “Flying” the plane was definitely the highlight of the Flight exhibit. 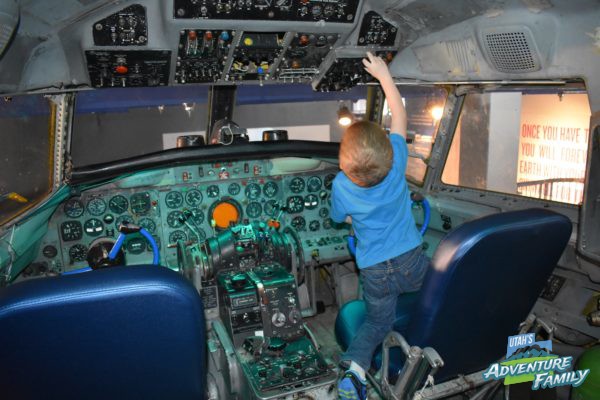 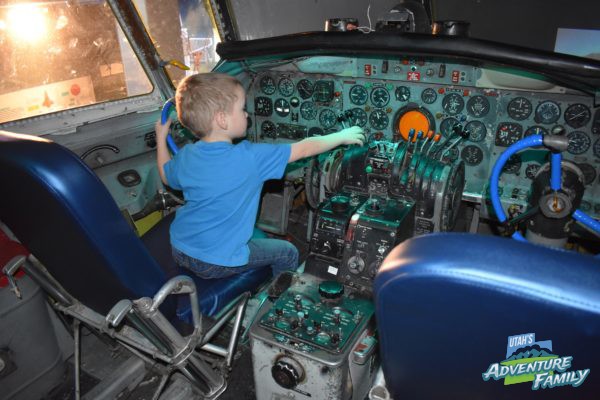 All of the switches and buttons are real. 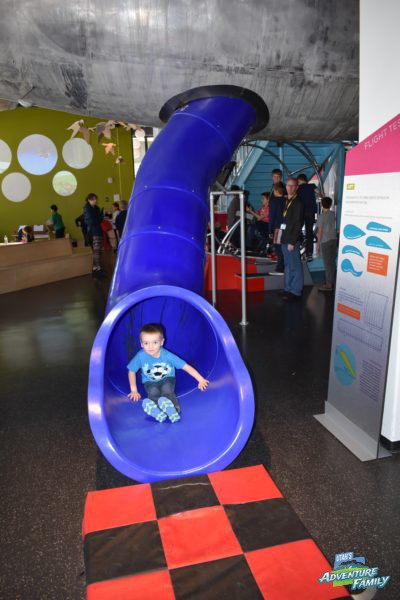 AND you can exit the plane through the slide if you are brave enough!

The new exhibit is definitely worth a trip to The Leonardo. Kids (and adults) who love Star Wars, Ironman, aliens, robots, or space will love visiting the Alien Worlds and Androids. And it’s included as part of your admission to The Leonardo, so no special tickets are needed. You will certainly enjoy spending a good part of your day exploring this fun museum. It is one of our favorites! 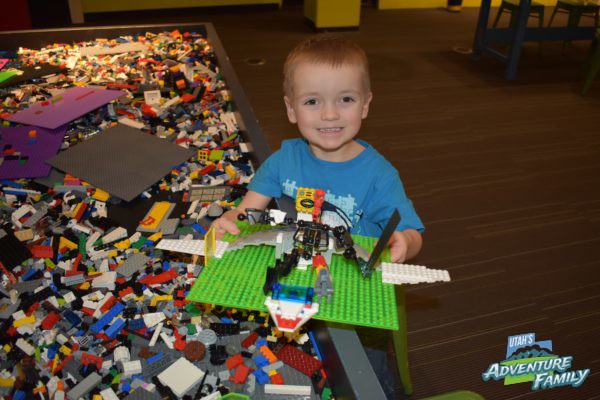 We love exploring in the Leo Lab. There are Legos, circuits to build, marble runs, and other science tools to use.