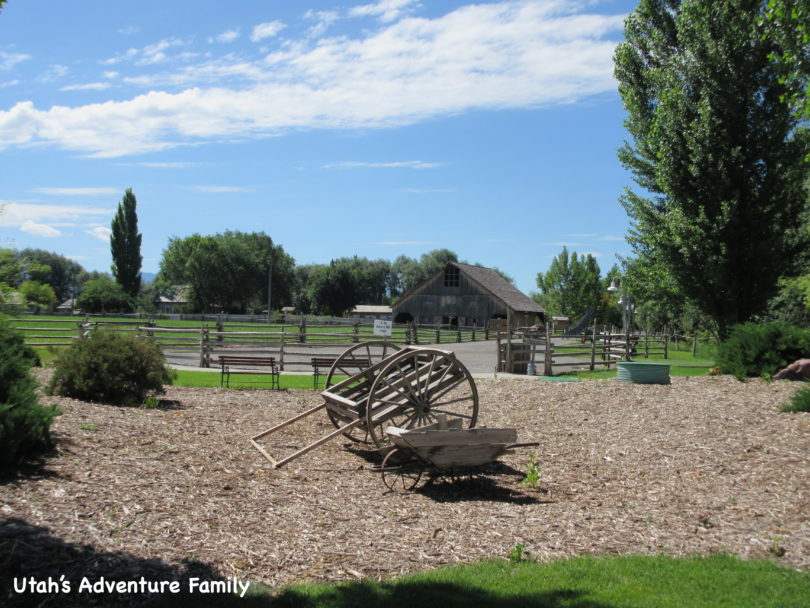 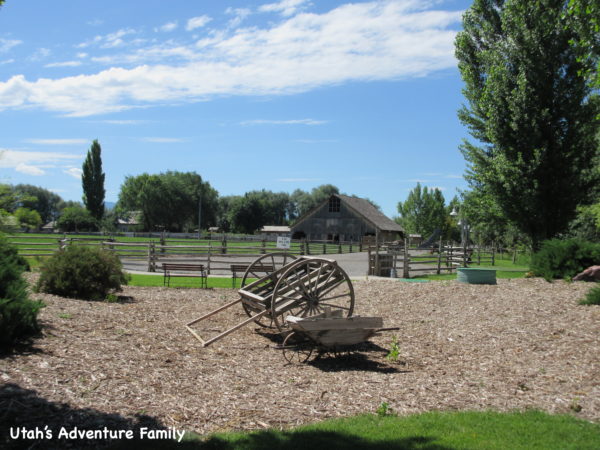 The American West Heritage Center is a working farm.

The American West Heritage Center in Wellsville (just outside of Logan) is a working farm that has a lot of activities for children. We were really impressed with the variety of things to do at the center, and we spent almost 3 hours there.

First of all, there is a tiny museum that shows a few historical scenes in the visitor’s center where you pay your entrance fee. There is a pioneer display and a mining display. This is a very small portion of the property, though. Also, don’t miss the buffalo in the field on the way out of the museum. 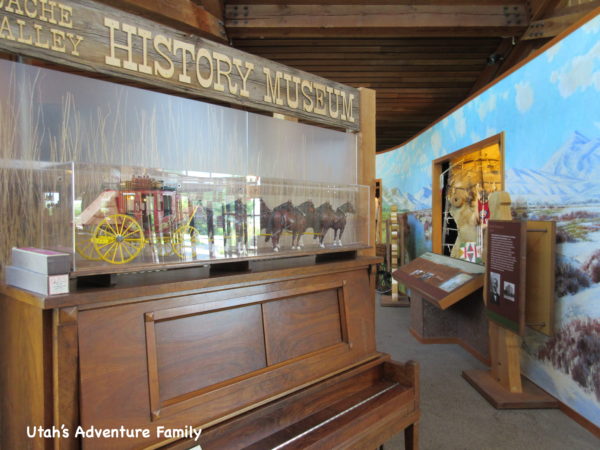 This tiny museum fills the space behind this piano. 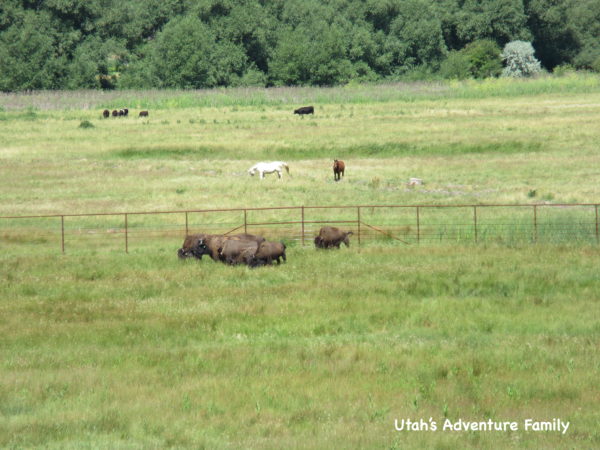 The buffalo were down in the fields.

The real fun of the American West Heritage Center is the hands-on activities. The property is divided into three sections. The first area is considered the farm area. Here there is a pioneer home where several ladies and their children in authentic dress were baking fresh rolls. They were delicious. We were allowed to walk through the entire home and property, too. Outside we visited a working smokehouse that smelled strongly of smoked meat, a root cellar, and even a henhouse, where we were delighted to find some eggs to take back to the farmhouse. There was even a summer kitchen where (apparently affluent) pioneers would cook to keep the heat out of the house in the summer. 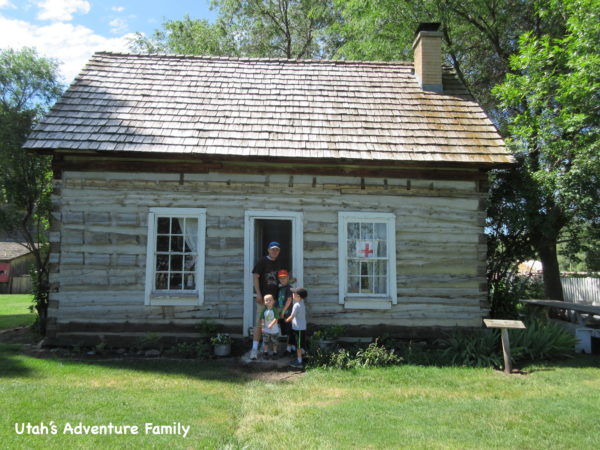 This is the farm house filled with women cooking. 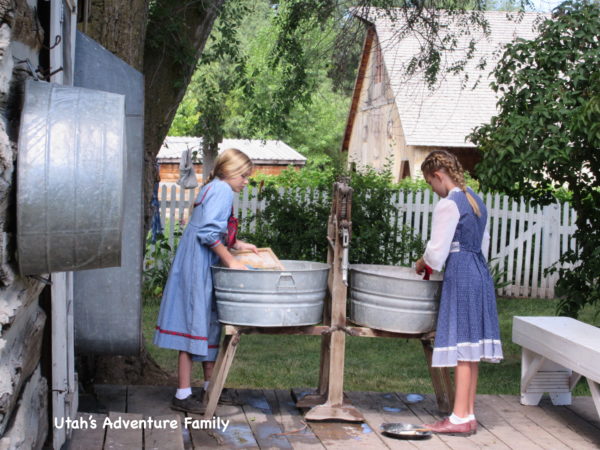 These girls were doing laundry outside. 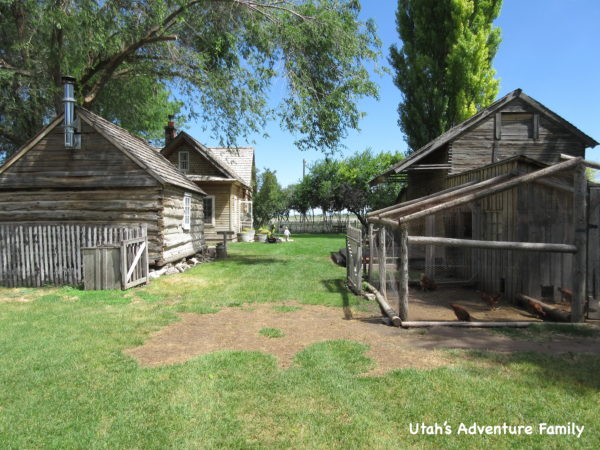 There are lots of buildings to explore in the farm area.

On the farm there was also a working forge where a blacksmith made a horseshoe in front of our eyes, while giving us a lesson about pioneer tools and methods. Of course, we enjoyed seeing the animals in the barnyard. There were pigs, draft horses, goats, chickens, cows, and a baby foal and her mother. 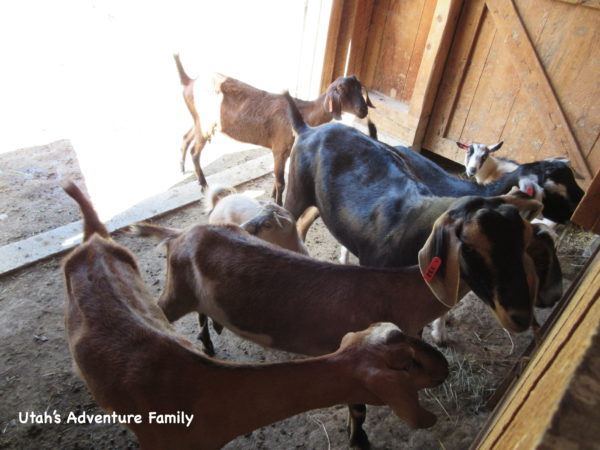 These goats were excited to see us! 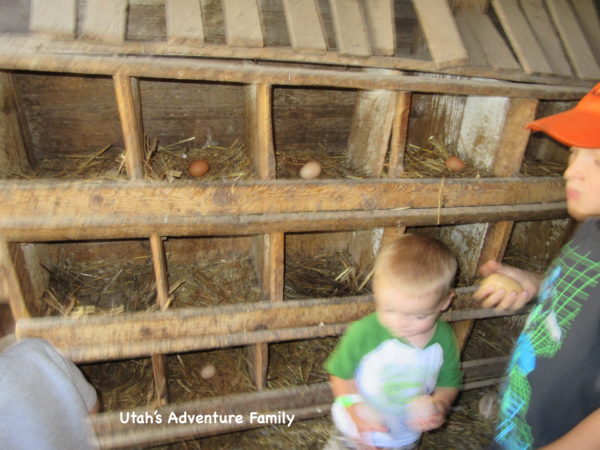 We were allowed to gather eggs in the chicken coop. 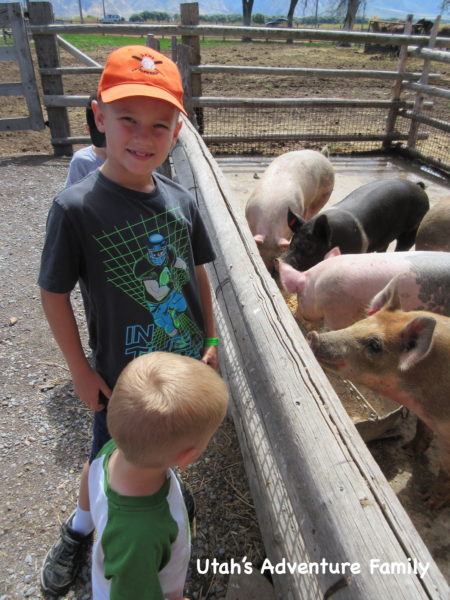 We never get tired of seeing farm animals. 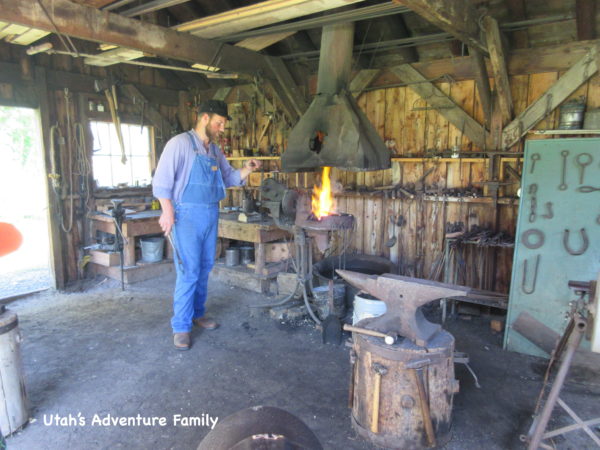 The blacksmith taught us lots of new things about this forge. 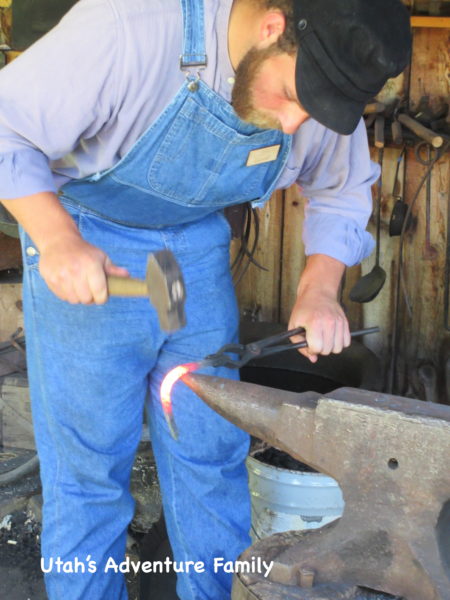 Here’s the horse shoe he made while we were there. 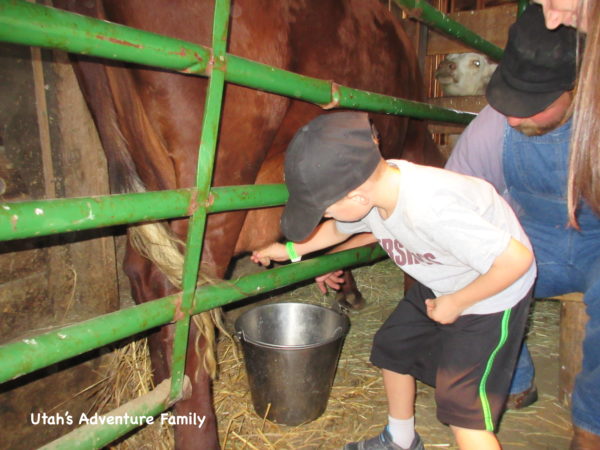 Milking the cow was one of the best parts of the trip.

The farm area had a few fun activities too–pony rides and a train ride. You can ride the ponies at any time, but the train only runs on the hour, so plan accordingly. The train goes around a small pond a few times, but our boys thought it was amazing. 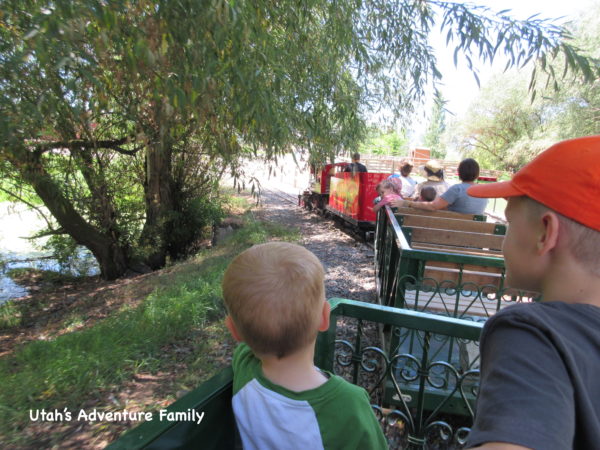 The train ride was a simple loop, but still fun! 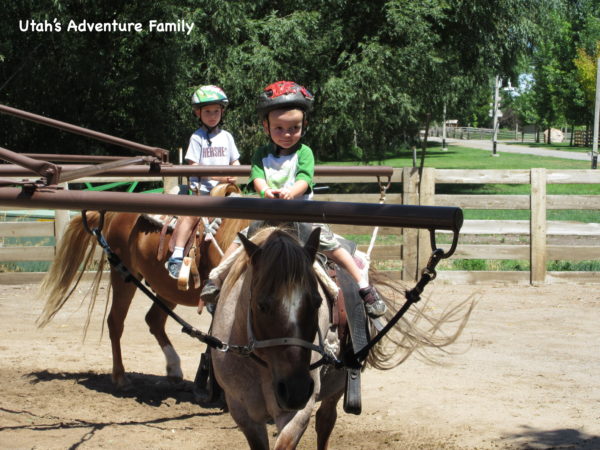 The pony rides are very safe…everyone wears a helmet. 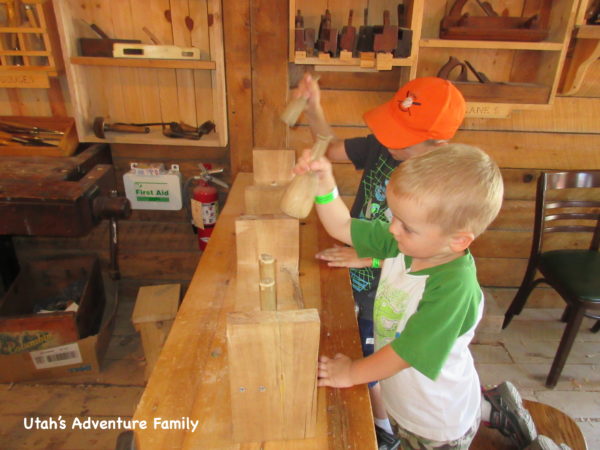 There is also a cooper’s shop on the property as you walk from the farm toward the pioneer camp.

The second area is a small mining town where the boys were allowed to pan for nuggets which they could exchange at the front counter for a treat. There is also a small trail in the shady mining town by a small stream. We didn’t take the time to wander through because we had to meet family, but we wish we could have cooled off in the mining town area for a little longer. 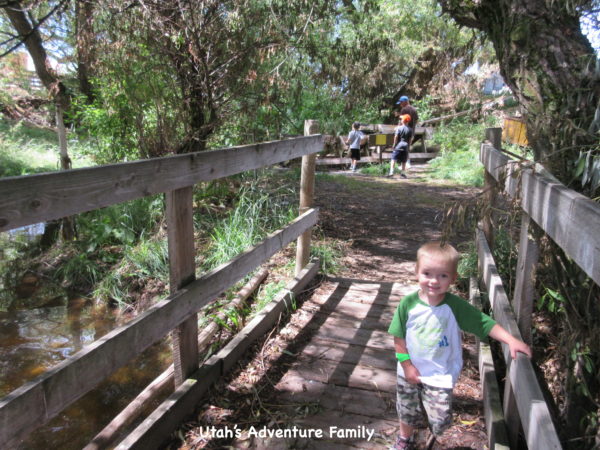 The mining town is shady and has a small trail that follows the river. 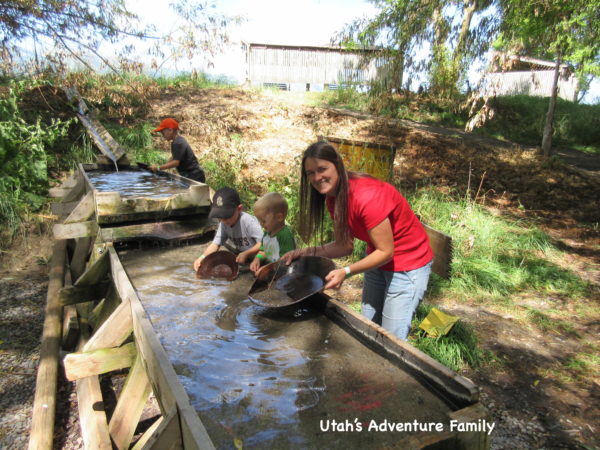 Panning for gold was very fun.

The third area is the pioneer area which also includes some Native American and Mountain Man sites. There is a tepee, artifacts, and a tomahawk throwing station (make sure the kids are supervised!). We let everyone throw the tomahawk, but none of us could get it to stick. We wouldn’t have been good Native Americans. 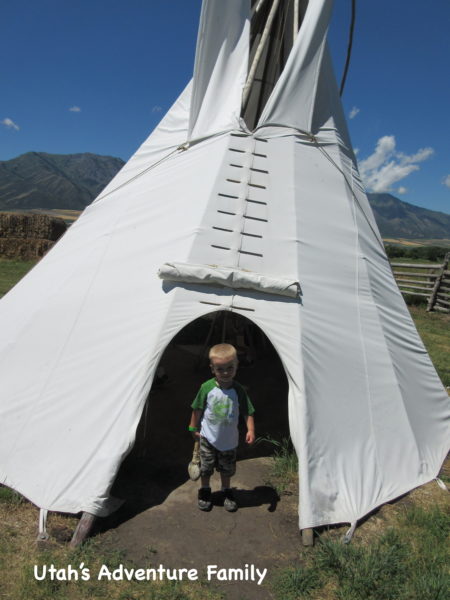 The teepee is fun for the children to explore.

Dad was the best at throwing the tomahawk.

The Pioneer Area has some fun activities. There is a cabin where the mountain man talked with us about furs and the different items in his cabin. He also told us some stories, and let us write with a feather pen. The pioneers have a smaller area than the farm. There were cabins and dugouts, pioneer games, and even a craft where visitors could make a rag doll. Our boys weren’t too interested in the rag dolls, but we had to try all the pioneer games. Make sure to walk in the dugout, and check out the schoolhouse. 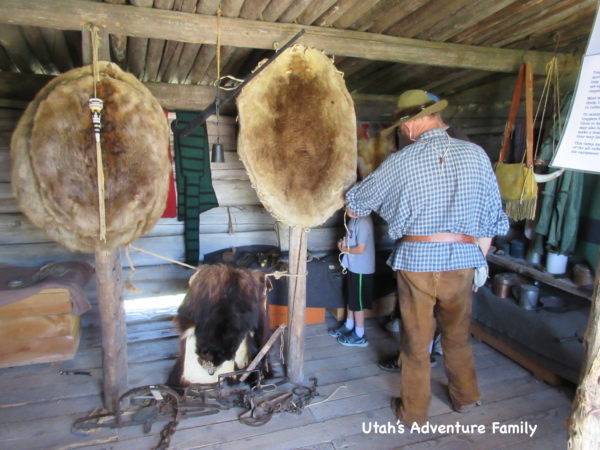 The mountain man told us lots of fun stories and facts. 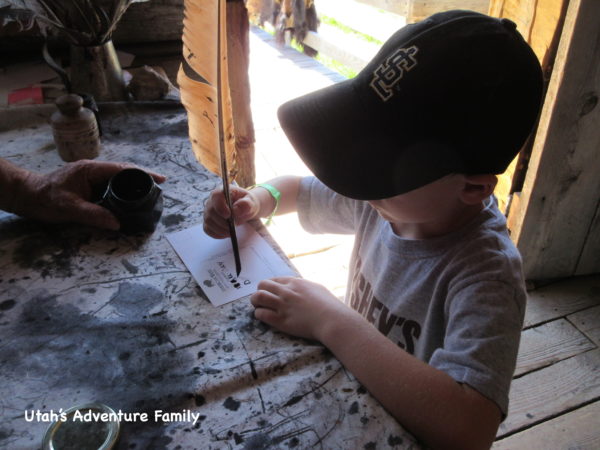 Our boys really liked writing a postcard with ink and a feather pen. 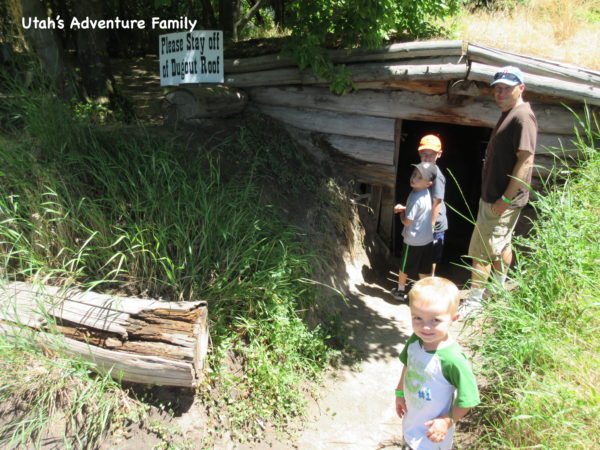 The dugout is open for looking in. 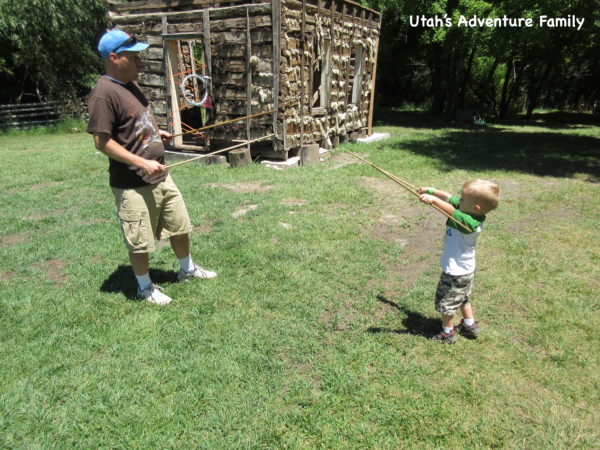 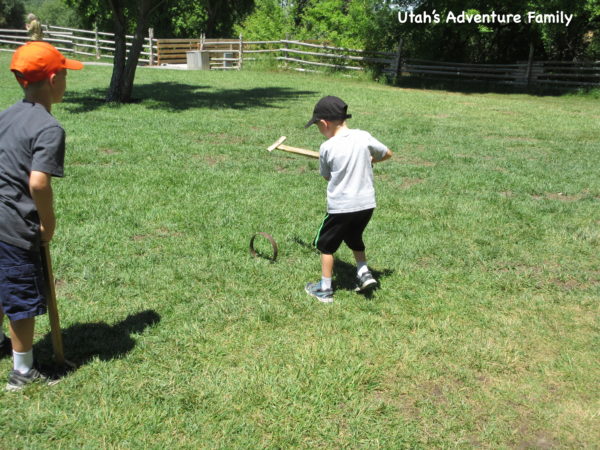 As you can tell, the property is large and there is a lot to see. We were really surprised that the crowd was pretty small, as this event was very impactful for our young boys. If you find yourself in Cache Valley, make it a point to vist the American West Heritage Center! They host special events such as Baby Animal Days and special activities on Pioneer Day.

American West Heritage Center is located on US-89 as you come down the hill from Wellsville toward Logan. Watch for the large sign on the west side of the road. 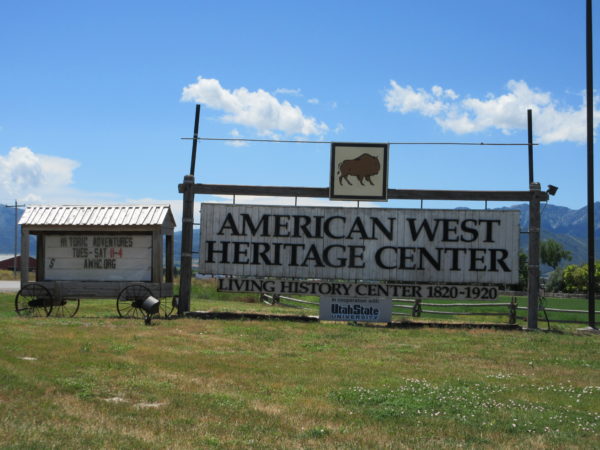 Watch for this sign as you come down the hill into Wellsville. 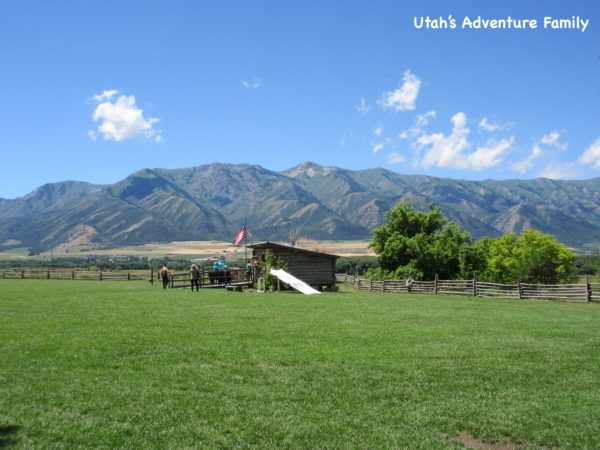 The American West Heritage Center is in a beautiful spot. We loved the scenery.