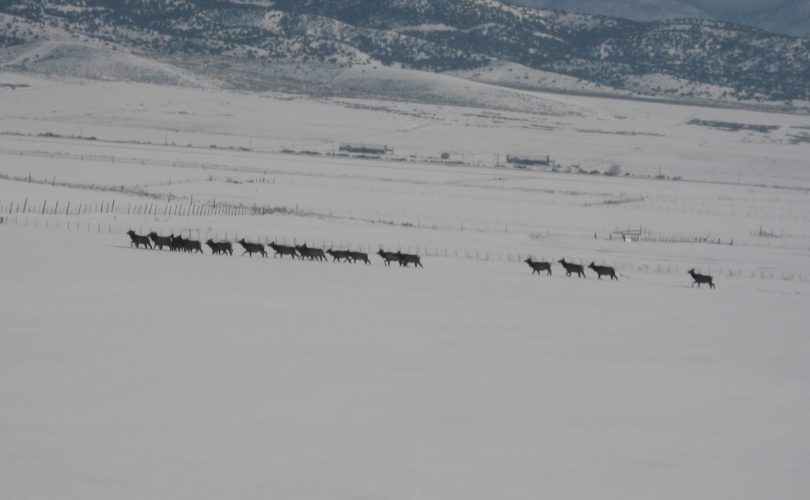 (Last Updated On: January 15, 2018)
Last week we had one of our more adventurous adventures. We drove to the Sanpete Valley to see the Bald Eagles. The eagles winter in Utah and can be seen around the state during January. Sanpete is our favorite spot to see the eagles because we know the valley so well. For those of you who don’t know us–we love to go bird-watching. So you might see other entries about birds later.

On our trip, which took about 2 hours (not counting a stop at Roy’s Pizza in Ephraim) we saw 15 bald eagles, more hawks than we could count (including red-tailed, Swainson’s, and sharp-shinned hawks), 8 wild turkeys, and some pretty western scrub jays. As an added bonus, we saw 20 elk including 1 big bull, and 2 deer. Though it does take a little practice to spot many of these things, you could not really miss the eagles, some of which were as close as 15 yards away.

We headed south on I-15 until we hit Nephi’s second exit (to Ephraim and Manti). By the time we passed Mona, we stopped counting hawks. We’d already seen all the varieties mentioned above. Just look on every other fence post. Going up Salt Creek Canyon on Highway 89 toward Manti, we spotted the wild turkeys. There were 8 of them near the KOA. We always watch the right side of the road out on the flat just after you cross the river and pass the turn off to the Nebo Loop. On our 4 trips through the canyon this January, we’ve seen the turkeys twice. They are pretty common in the winter.

There is a very good chance of spotting an eagle between the Sanpete County line and Fountain Green, so keep your eyes peeled. Also, remember that Bald Eagles don’t get their white heads until about age 3, so if it’s bigger than a hawk, look closely at the profile–it’s probably an immature eagle.

Turn right before you leave Fountain Green (at the red “Nailbender’s” building) and head toward Wales. This is where we saw the majority of the eagles, as well as the herd of elk and the deer. The road winds around and ends up in Chester. As you travel, search the trees and fence posts. Though you are never assured a sighting, we’ve never failed to see eagles here at this time of year. Our best eagle sighting was near the end of this loop. We stopped and watched an eagle on a fence post at about 15 yards. Though we weren’t particularly quiet, he didn’t seem to mind at all.

As a bonus, there are some alternate farms near Wales. There is a llama farm as you cross the Sanpitch River (heading East) on the right side of the road. There is also a peacock roost on the left side of the road in Chester. The roost is actually a house with between 20 and 30 peacocks on the roof. A few years back, we saw even saw a zebra in Chester, though it hasn’t been around lately.

When you reach Chester, turn left to head back toward Fountain Green. This loop takes around 2 hours from Utah Valley.


We have also seen bald eagles almost every winter sitting in trees by the Provo river, down by the boat dock in Provo. Take Provo Center Street West toward the lake. Just before you arrive at the ranger station (entrance to the boat dock), turn right onto a little road. You will see a parking lot less than 1/4 mile on the right. If you park here and follow the trail around the bend in the river, you might see the eagles sitting here around dusk. These eagles aren’t always there, and are a little harder to see (since they are sitting as it gets dark). But it is a closer location than Sanpete County.