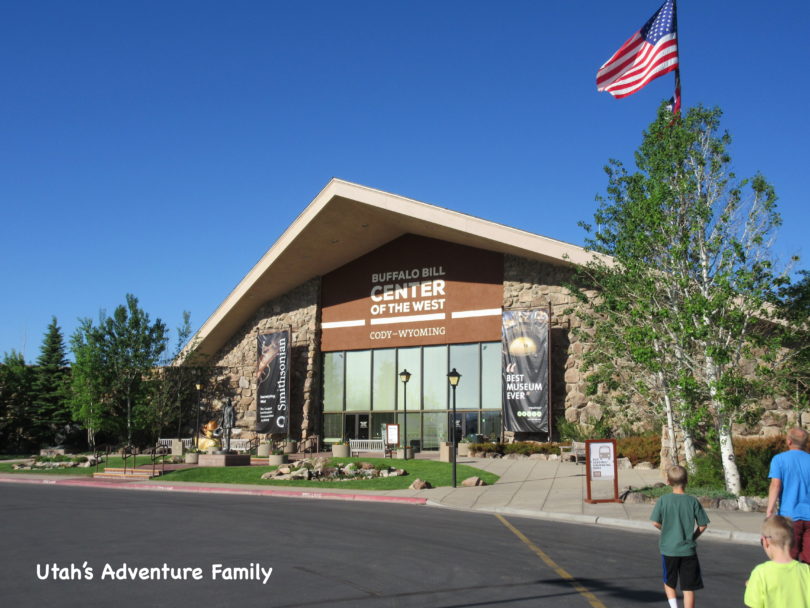 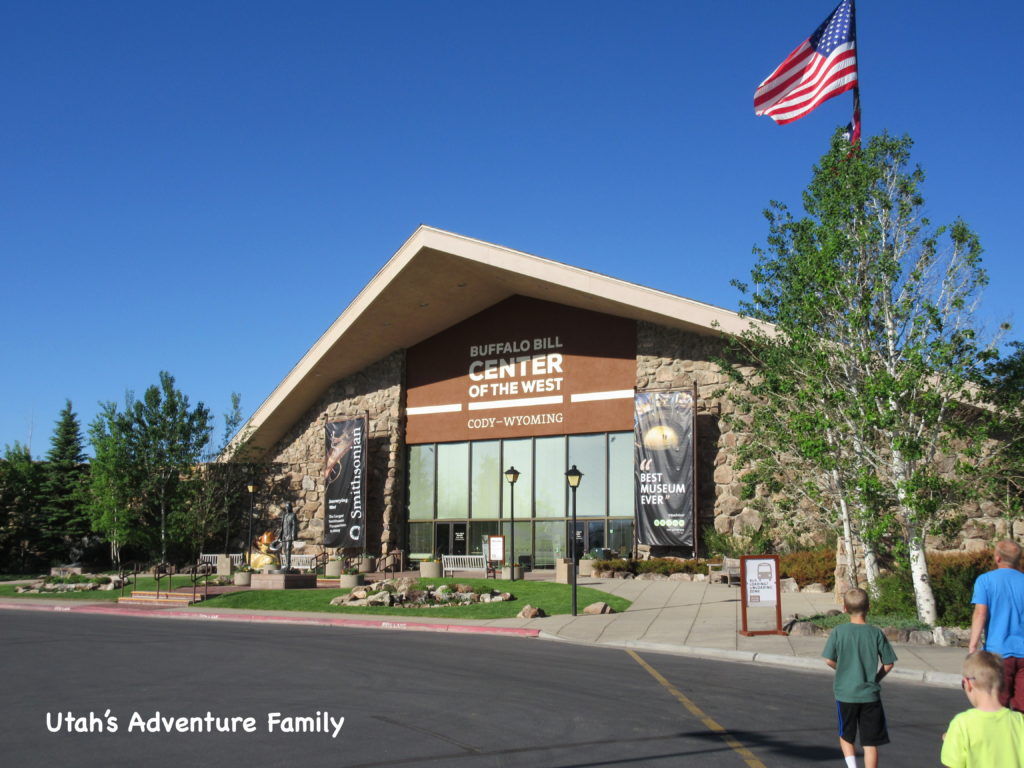 Cody, Wyoming is a resort town outside the eastern gate of Yellowstone National Park. The crown-jewel of Cody is the massive Buffalo Bill Center of the West Museum. This museum is really 5 museums rolled into one: the Buffalo Bill Museum, the Draper Natural History Museum, the Plains Indians Museum, the Whitney Western Art Museum, and the Cody Firearms Museum. So when this museum seems expensive, just divide by 5 and you’ll feel a lot better. Note: Though I’ll refer to the museums separately here, they are all housed in the same massive building. 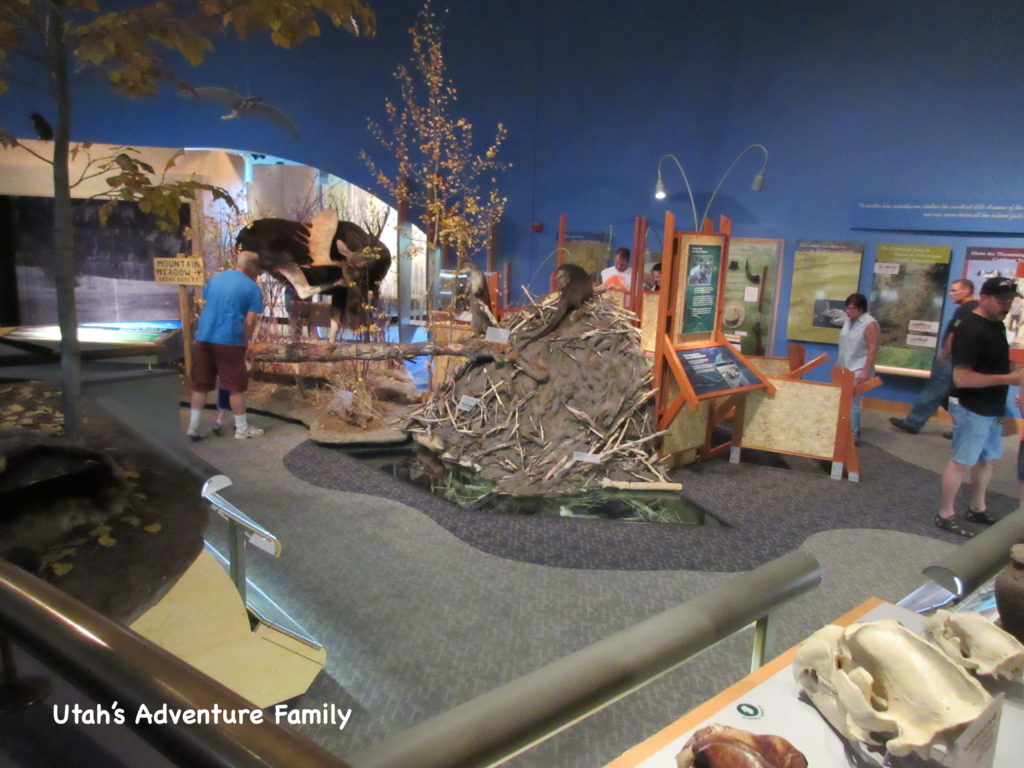 The Draper Natural History Museum has a display for each section of the forest from alpine down to wetlands. 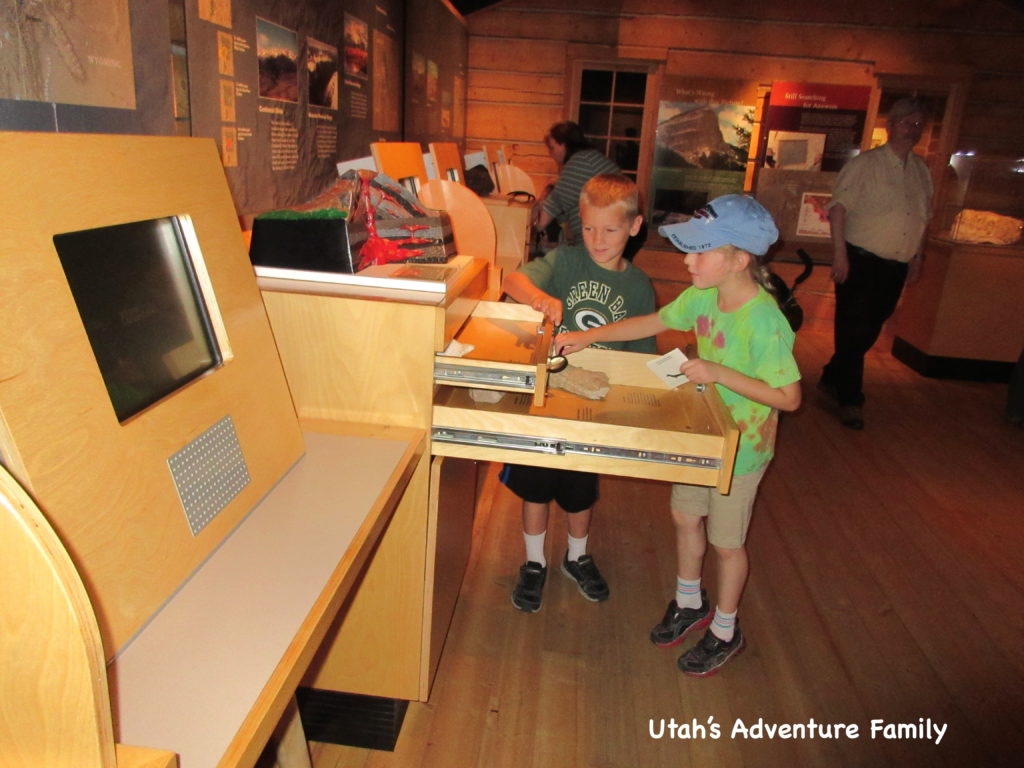 There are tons of hands on activities throughout this museum. 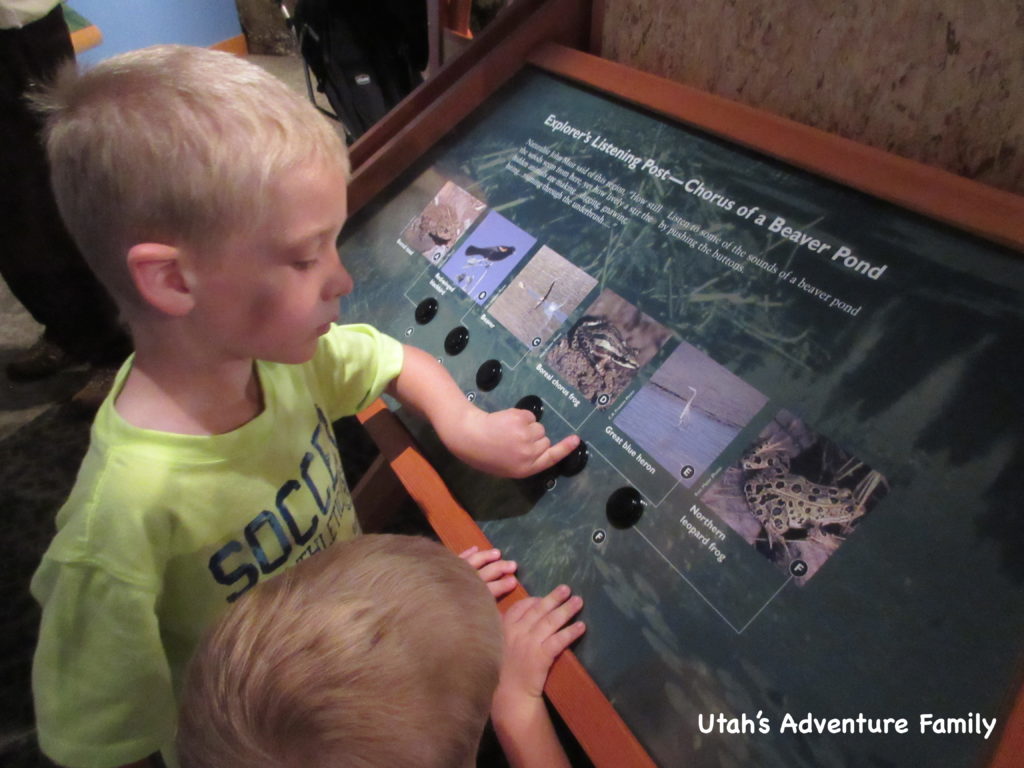 Our boys loved all the different displays. 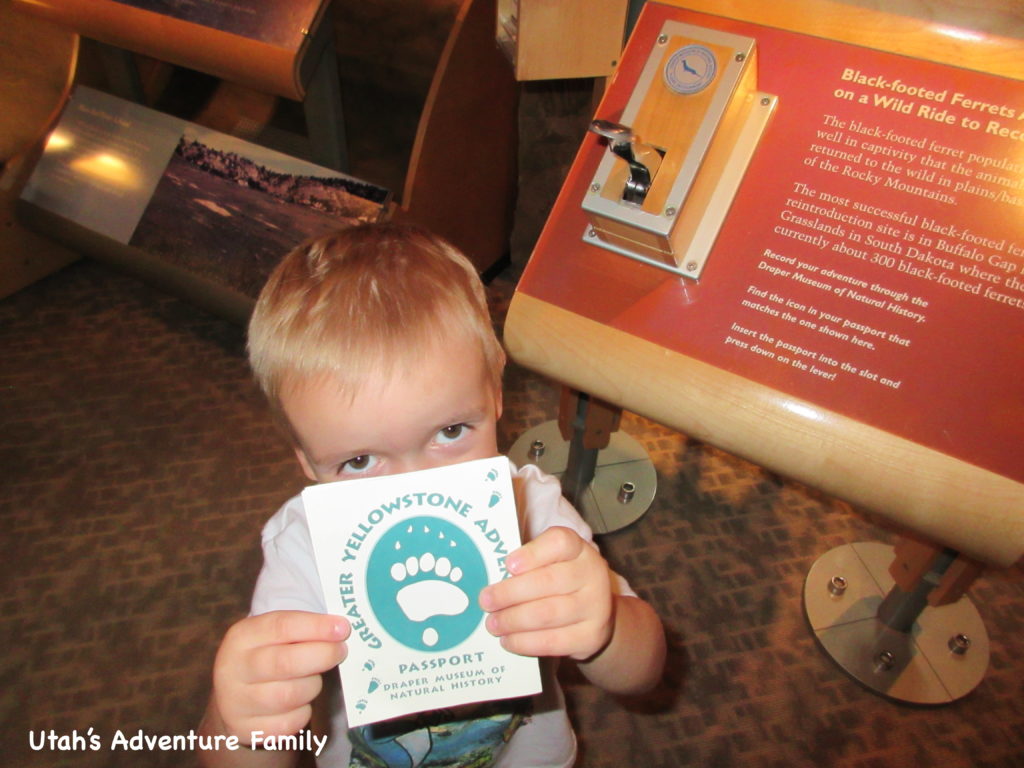 We also really liked the passport part of this museum. At the beginning of the museum, grab a passport. As you move through each section watch for the stamps and complete your passport as you work your way through the museum.

The second museum on our list was the Buffalo Bill Museum. This one, obviously, takes you through the life of legendary cowboy Buffalo Bill. It is much smaller than the natural history museum, but it gives you some great information on the life of a well-known American. For example, did you know that Buffalo Bill advocated for equal pay for women? Our boys also liked the video of Buffalo Bill’s original Old West show that must have been shot in the early 1900s. It was a silent movie with exaggerated movements played in high-speed, which they thought was hilarious. 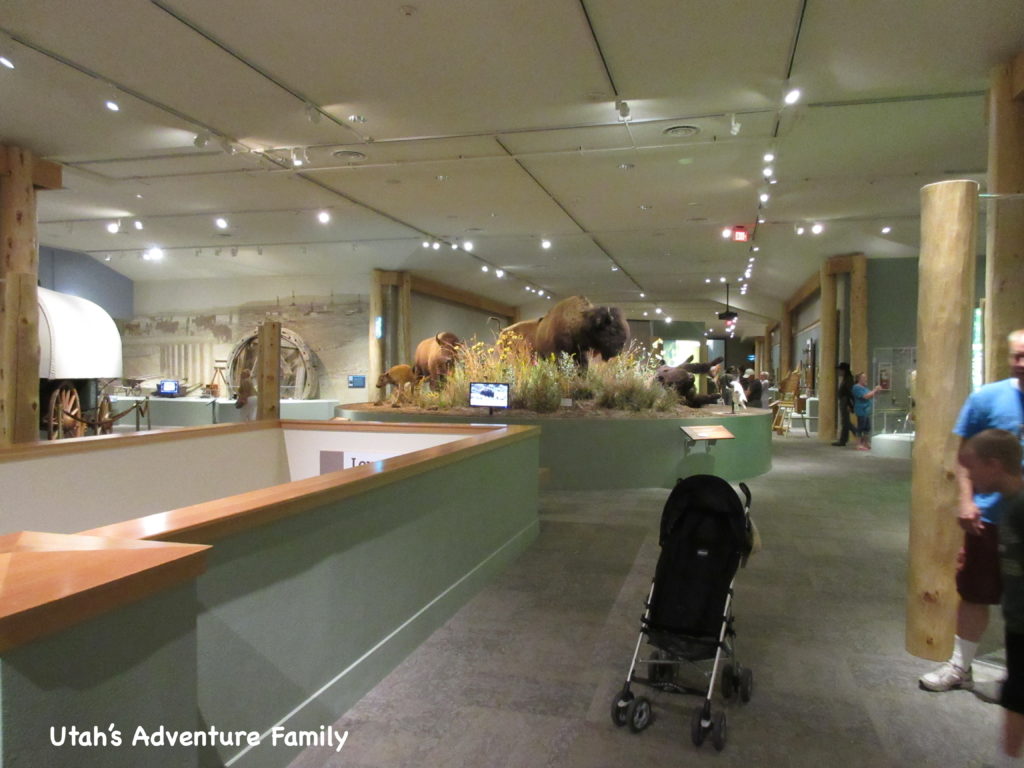 This is an overview of the Buffalo Bill museum. 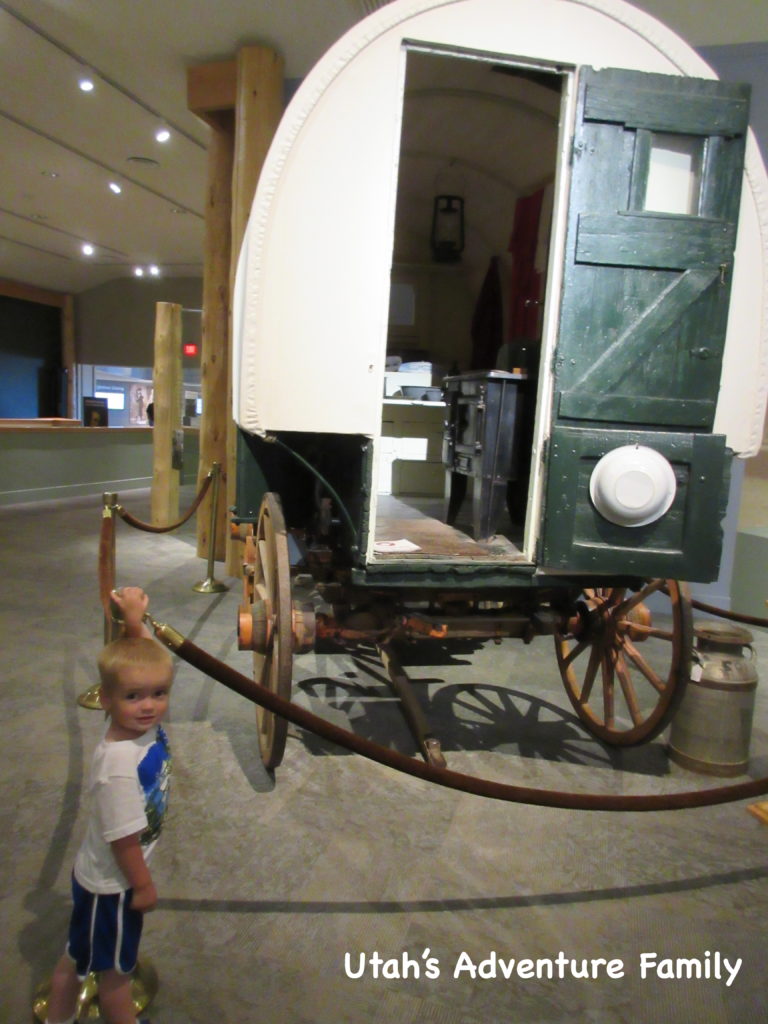 There are lots of displays on the Old West. 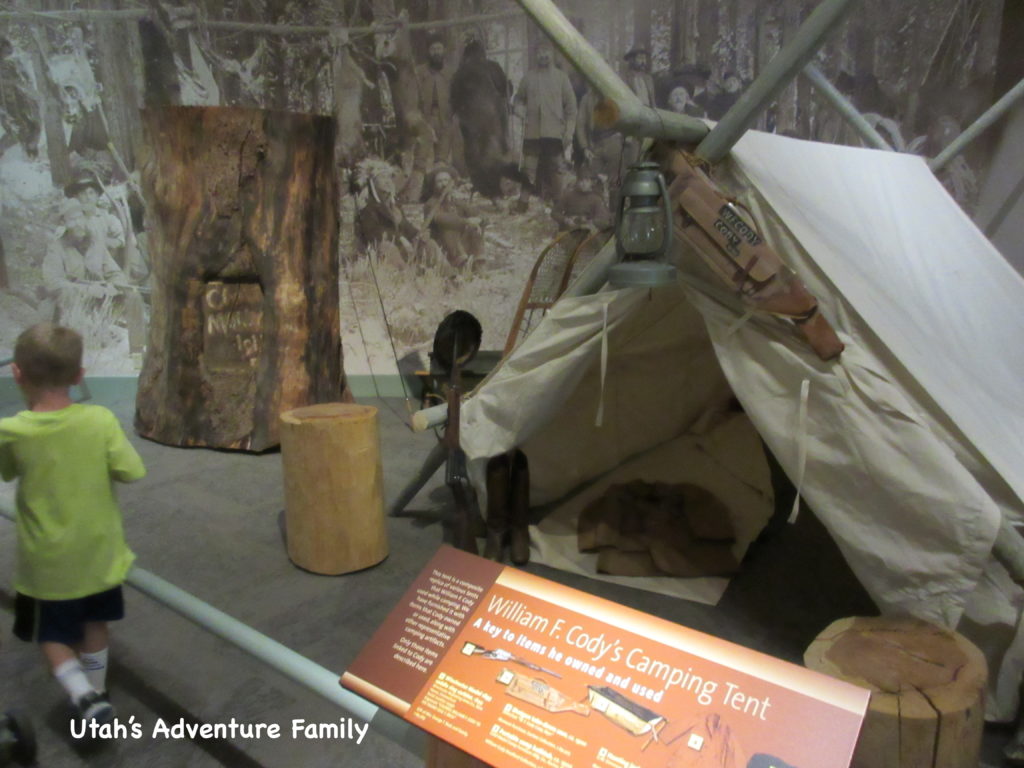 We learned a lot of about William F. Cody aka Buffalo Bill. 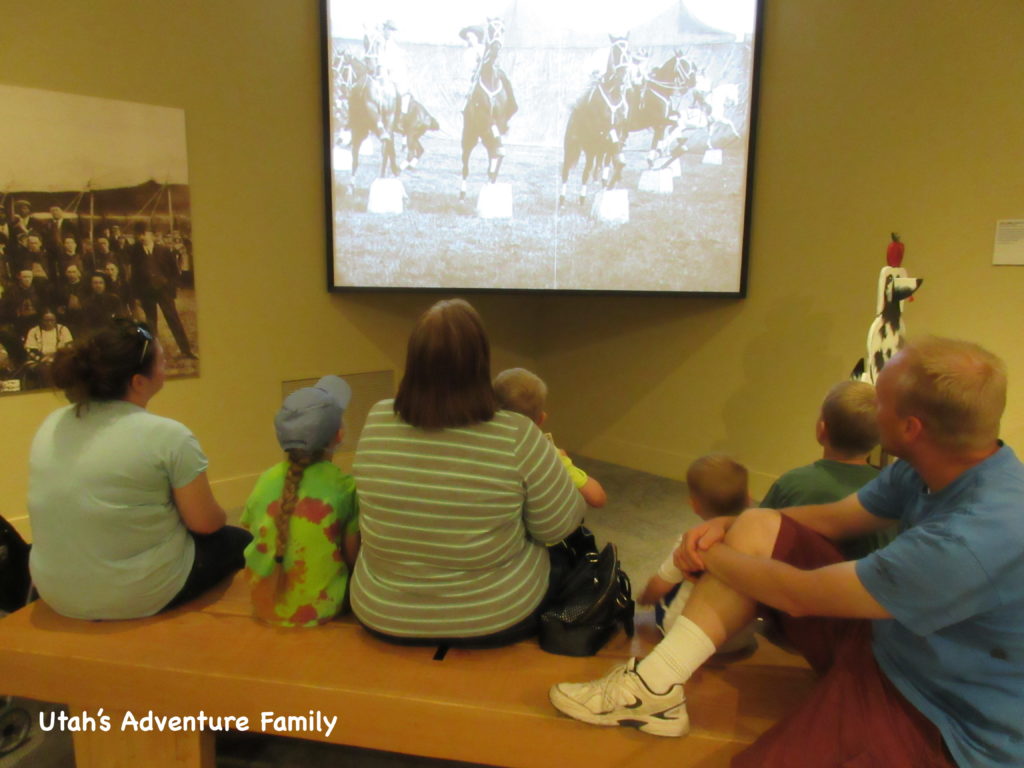 We watched the old show a few times.

The Plains Indians Museum was pretty amazing. It is quite large, and has some really interesting exhibits. Our boys’ favorite part of this museum was the large round structure in the center of the museum. It is very dark, and there is a movie that plays on several screens. This movie is in the words of several Native Americans and tells their history. Behind this domed structure, there is another cool display that has a ton of artifacts and historical explanations. 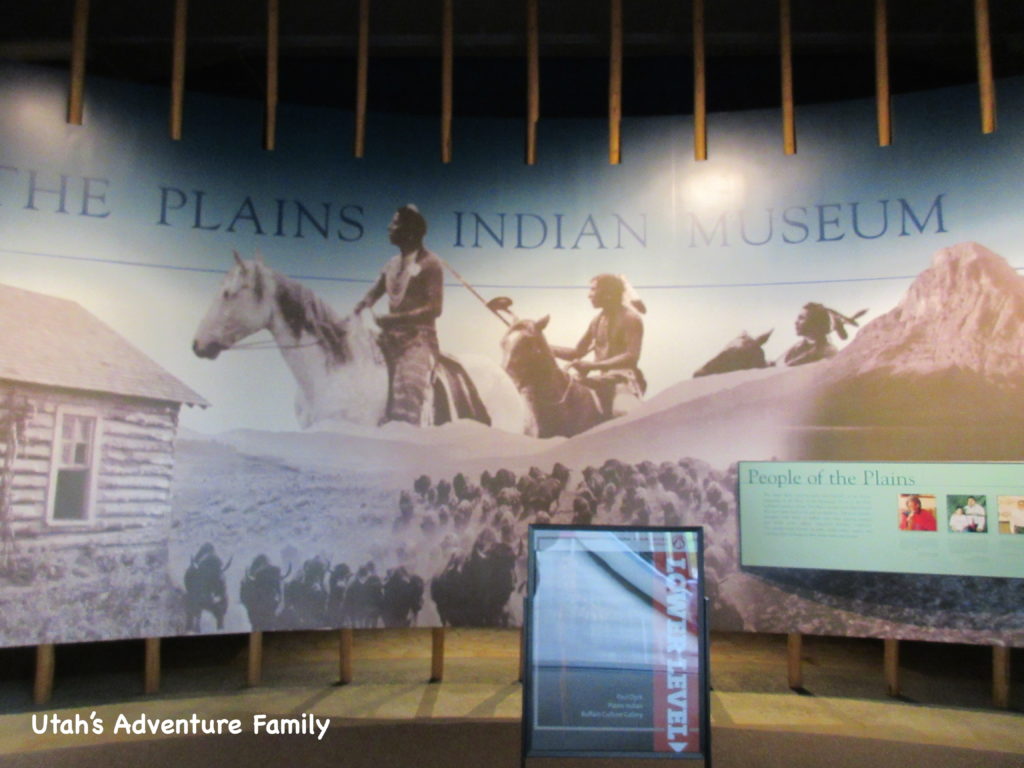 The Plains Indian Museum has a lot of interesting artifacts. 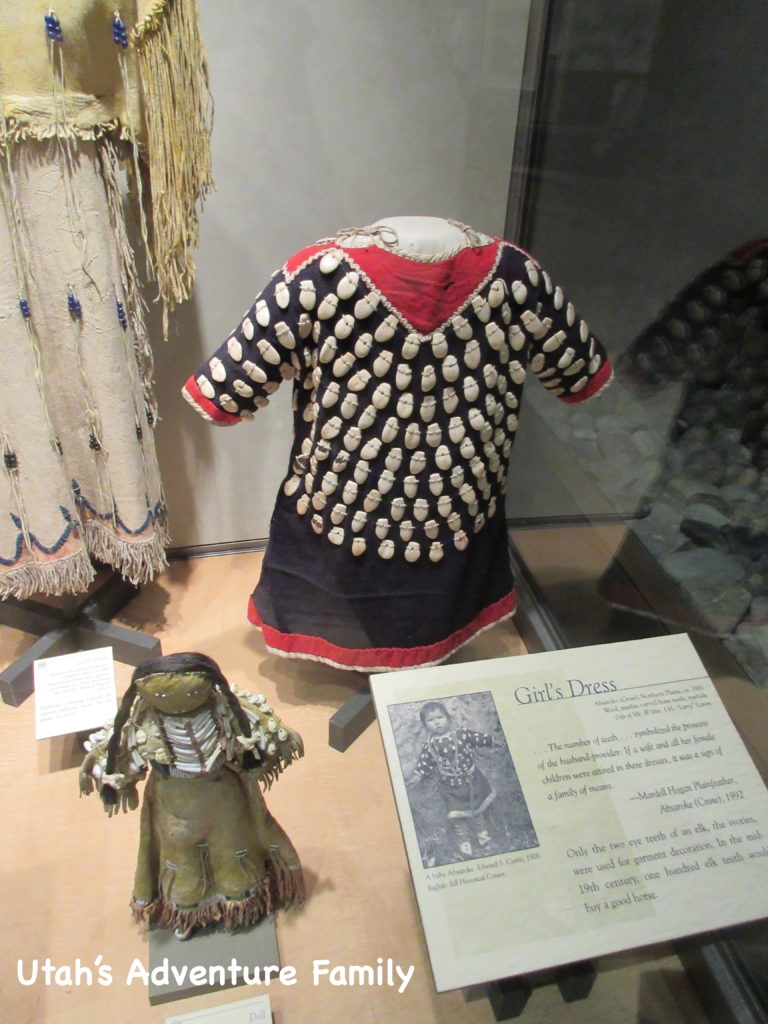 I thought this dress made with elk teeth was amazing. Some of the clothes they made were fascinating. 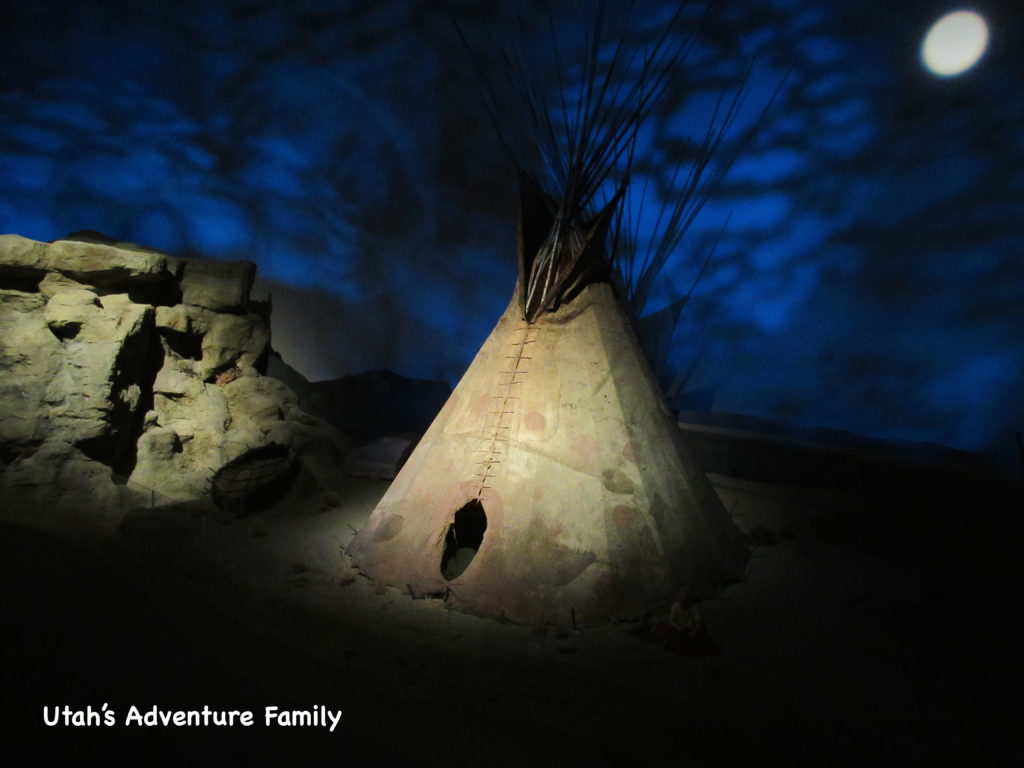 There is a huge room where you can sit and listen to Native Americans share their experiences. It moves through the time of day and seasons.

We only spent a few minutes in the Whitney Western Art Museum because our children were getting tired after so many hours. Still, there was some really cool art. One thing that we liked about the art museum was a Bingo board provided for kids. It had 25 small pictures, or portions of pictures that kids could look for as they went around the museum. Our older boys really liked looking for different items and checking them off their Bingo board. The art museum is fairly small, but there is plenty see. 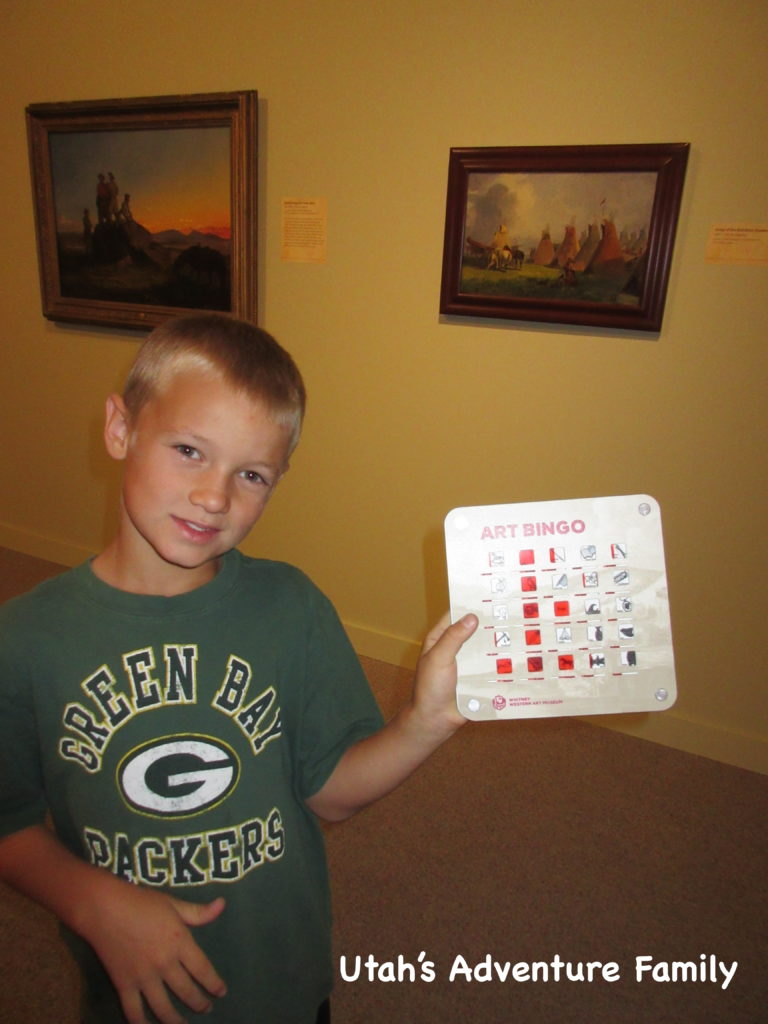 We liked the interactive bingo boards to help our boys stay busy in the art museum.

The final museum is the Cody Firearms Museum. A gun enthusiast could spend hours and hours looking at every kind of gun ever made in this museum. For us, we buzzed through in a hurry because there weren’t a lot of interactive elements in this museum for our kids. One thing we liked about the firearms museum was the war section. There is a long hall that takes you through all of America’s wars and shows the guns that were used in each– Revolutionary War guns, Civil War guns, etc. 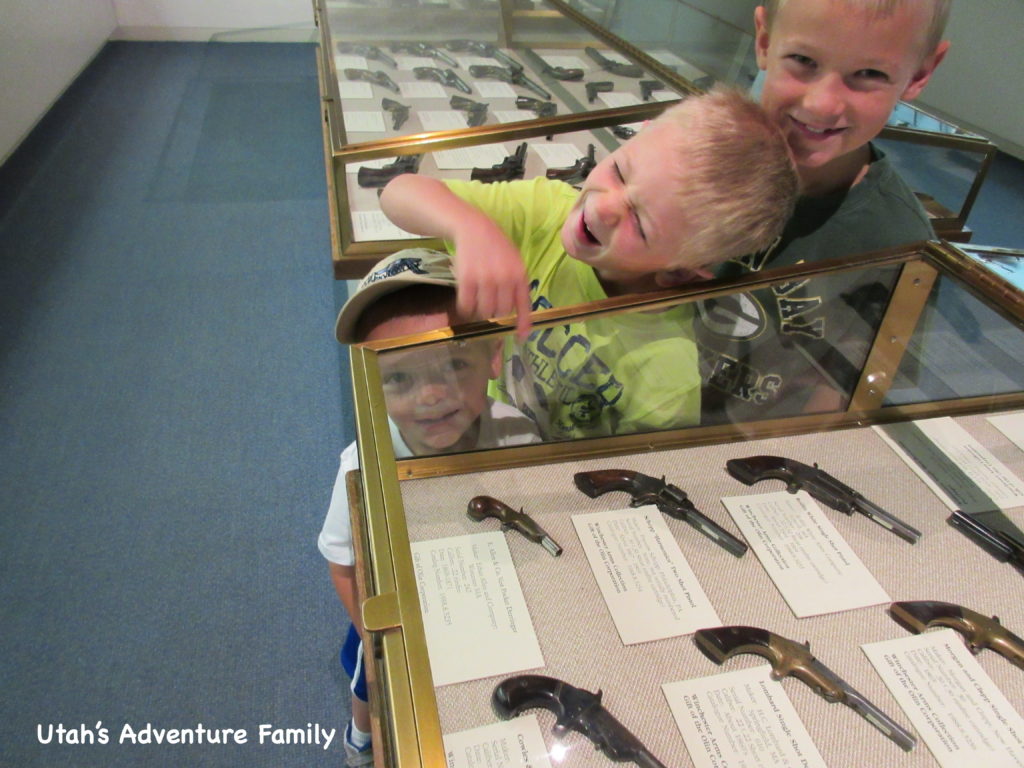 Our boys thought this tiny gun was hilarious! 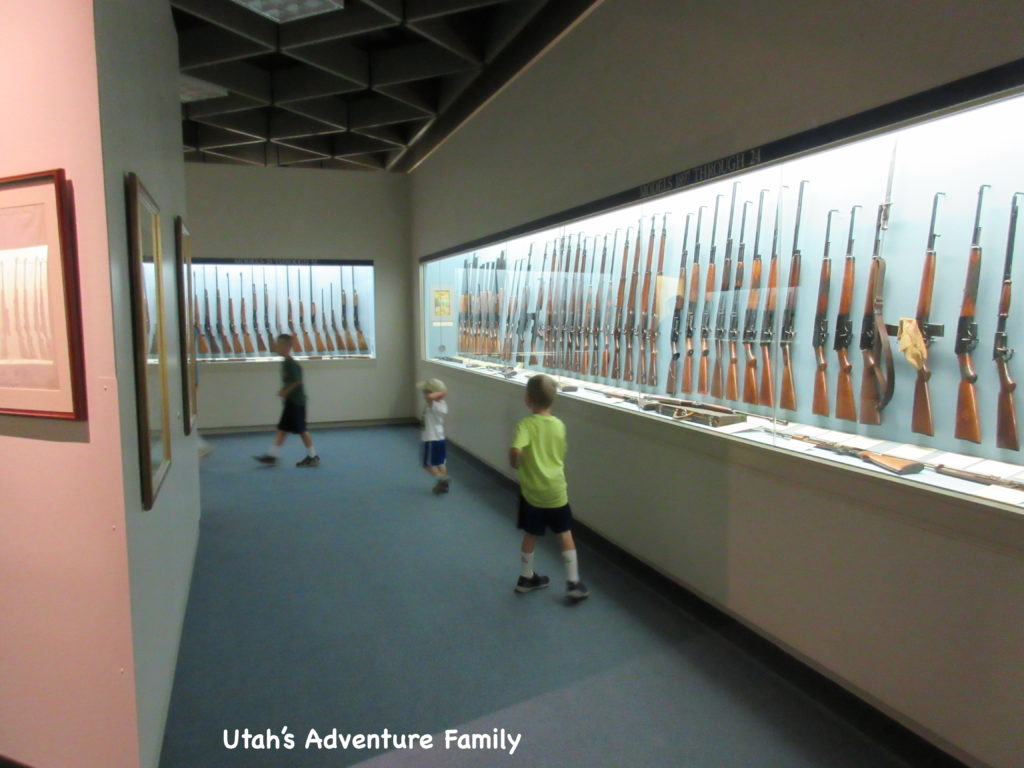 It was literally wall to wall guns. 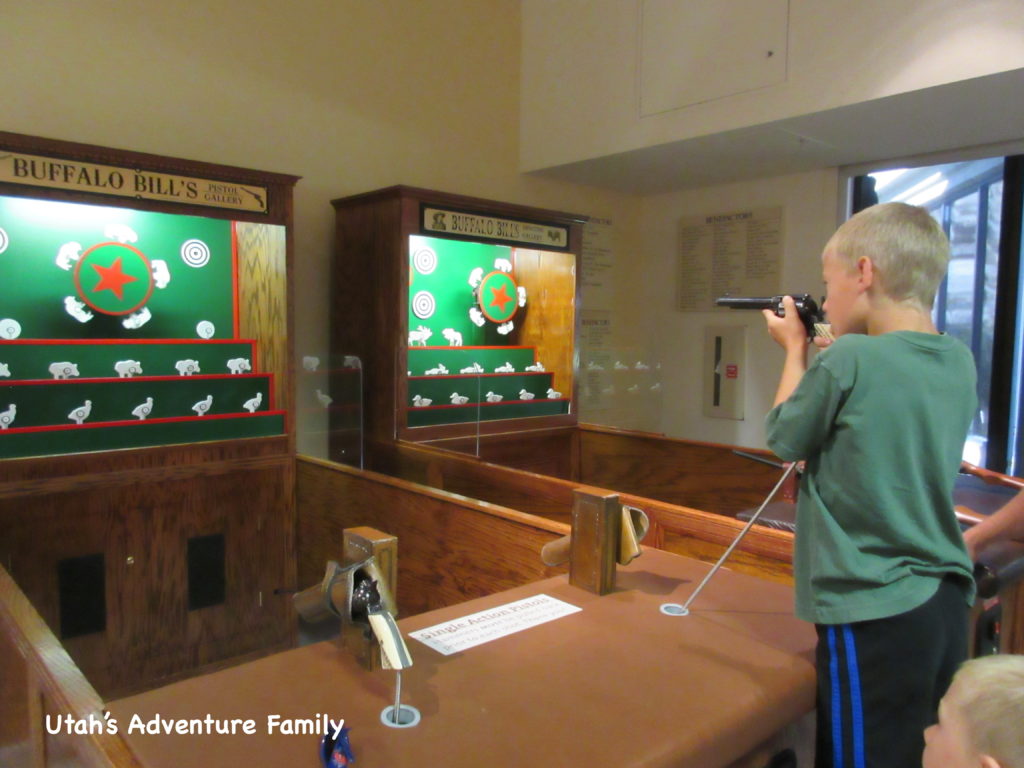 There is a place where the kids (and adults) can shoot at the moving ducks for $1.

We also saw a special event at the museum, which they have on occasion. It was a live bird show, which turned out to be our boys’ favorite part of their visit. The show lasted about 30 minutes and we were introduced to a turkey vulture, an American kestrel, a golden eagle, a red-tailed hawk, a peregrine falcon and a great horned owl. Being birders, we love that kind of stuff. 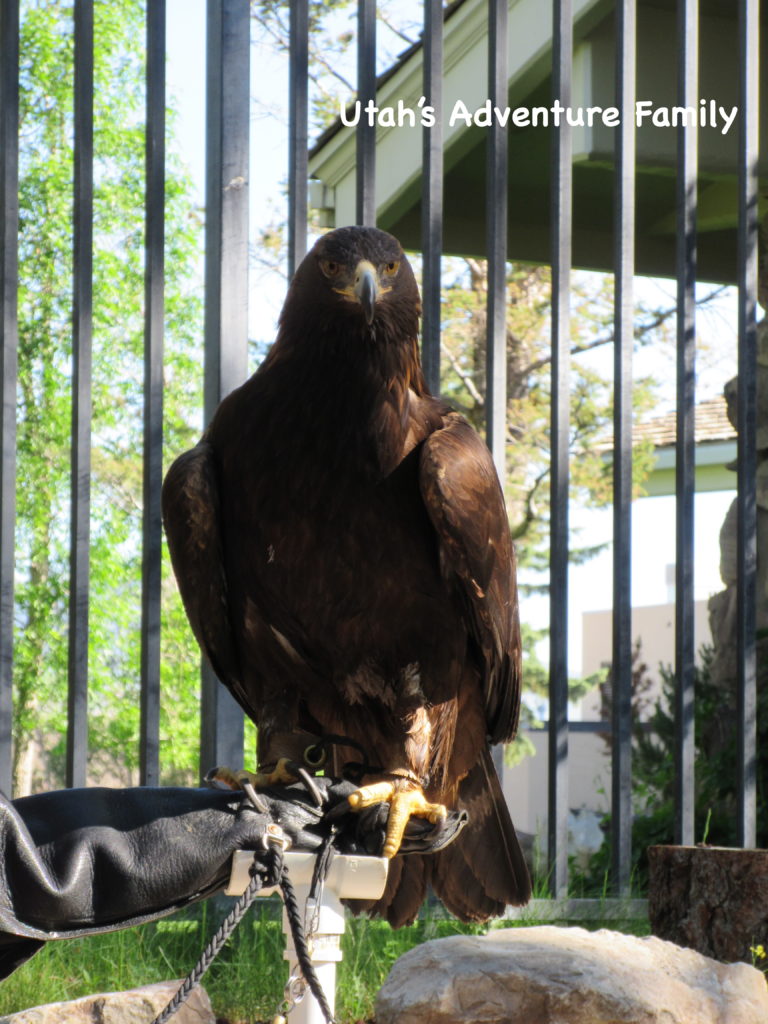 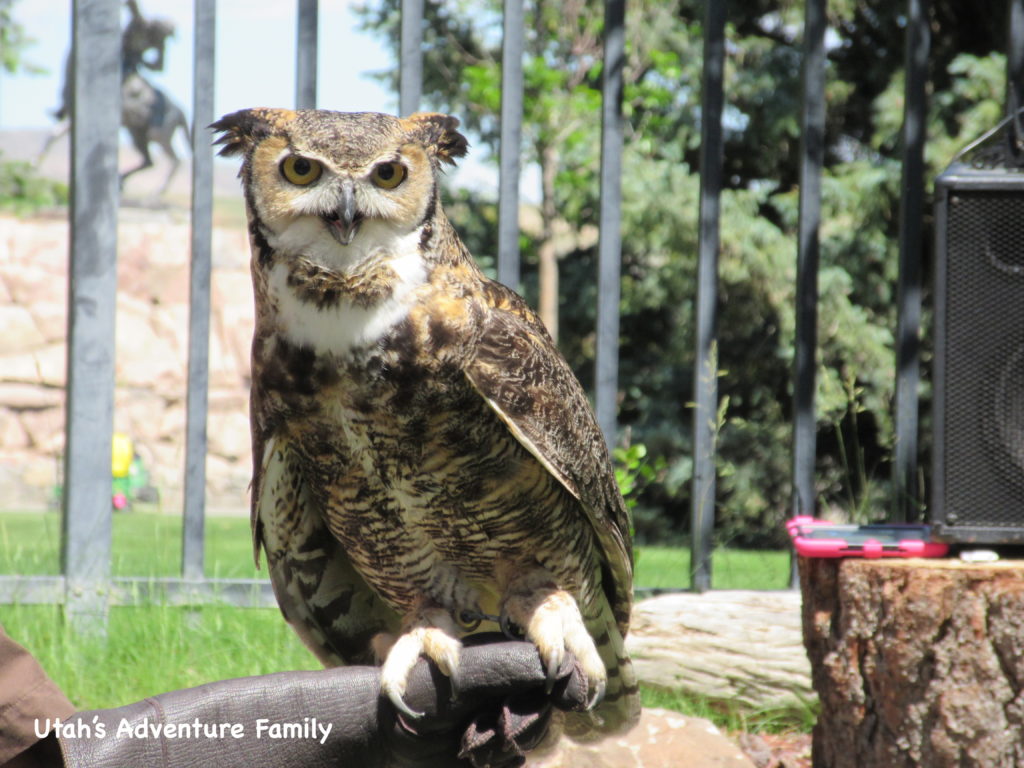 The Center of the West Museum is a must-do if you are visiting Cody. Your admission ticket is good for 2 days because it takes forever to see this massive conglomerate of museums.