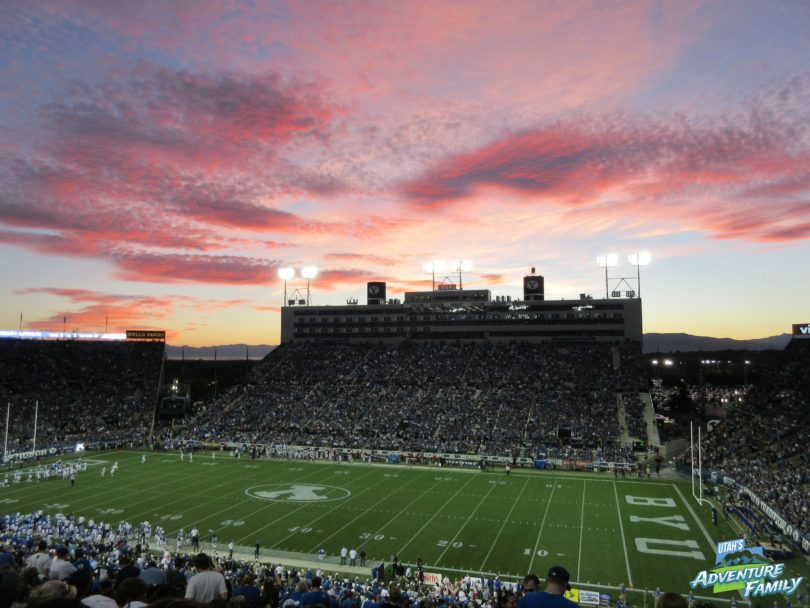 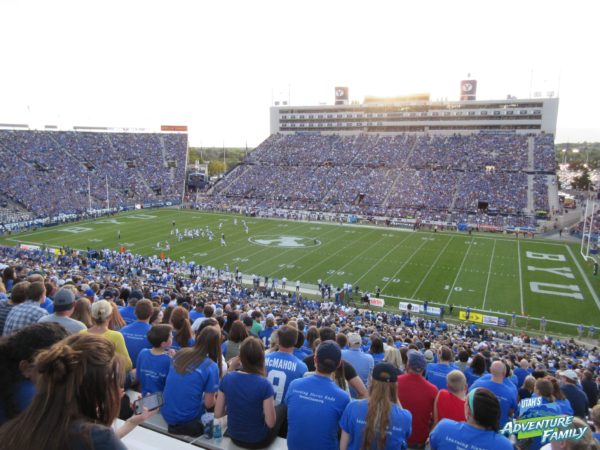 We love BYU sports for our family, because there is no alcohol or cursing, and rarely poor sportsmanship. You can always count on a positive environment no matter the sport. Yesterday we went to a football game, but we’ve also attended BYU volleyball and basketball.

In our opinion, football is the most exciting sport to watch, but also the most expensive. Tickets to a college football game tend to run at least $30 each for the cheap seats. The nice thing is, though, pretty much all of the 65,000 seats are good seats. 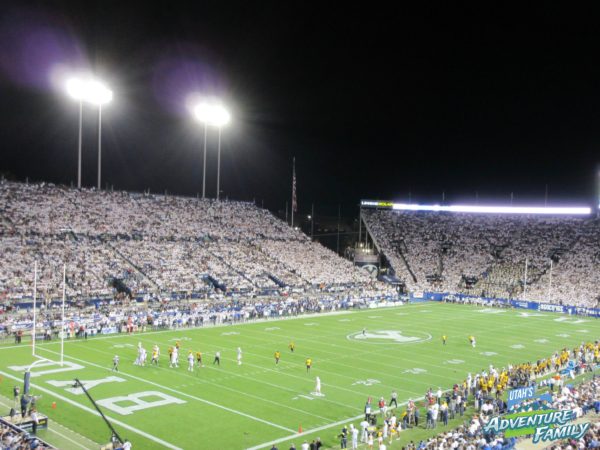 We even sat up in one of the corners once and we still could see very well!

There are a few things we like about BYU football. The first is the environment. We already noted that it is a positive, family-friendly environment, but it is also boisterous. Like most college football stadiums, it will be rocking when you’re there. If your kids don’t do loud noises, the football game is the last place you want to be. 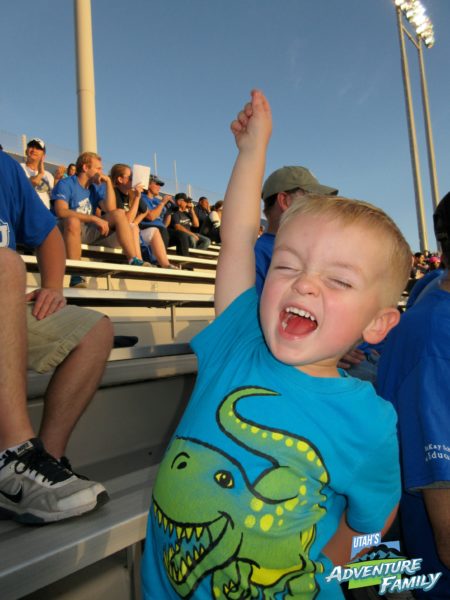 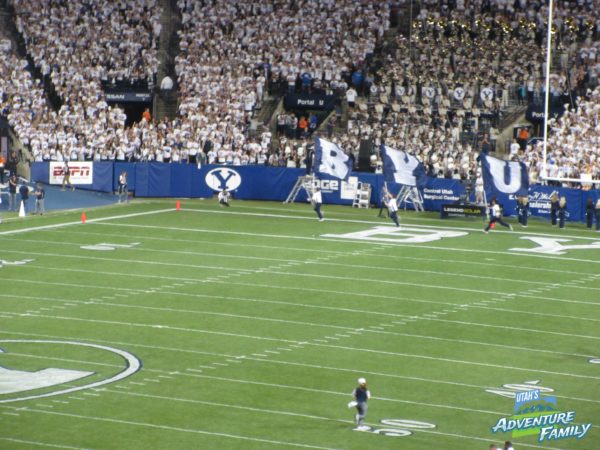 We love when they run the BYU flags around the field! There are a lot of fun traditions at the BYU football games. 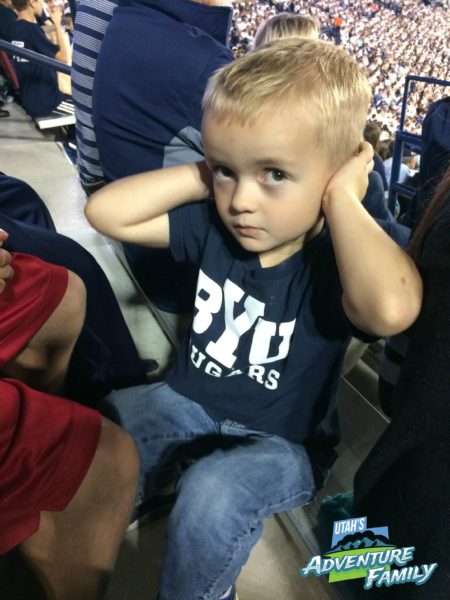 Sometimes it gets a little TOO boisterous. 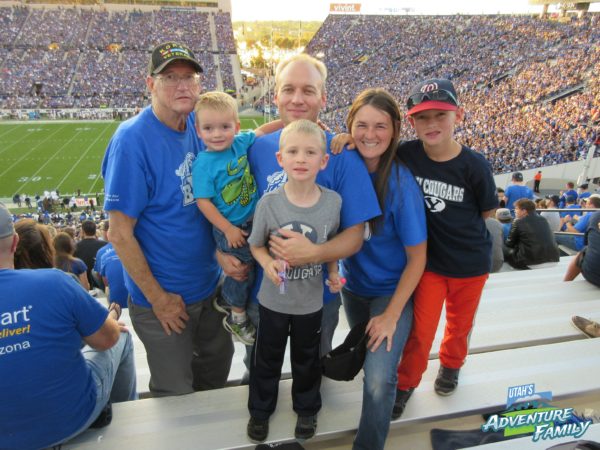 It is a great family friendly outing!

Another perk of BYU football, is that the announcer makes the game a little easier. He gets the crowd involved on first down and third down, which has helped our boys understand the game, and believe me, to outsiders “second and twenty-two” can be like a foreign language. We like that the announcer at BYU games helps to decode that in a fun way. There is also the traditional wave and other fun cheers that keep the kids happy and enjoying the game.

Just a note about the food at BYU games. They don’t allow you to bring outside food or drink in, even though they allow a few baby snacks. I usually can get by with a few bags of pretzels for the boys. They also made us dump out our refillable water bottles, but not the sealed ones that hadn’t been opened. So our recommendation is bring empty water bottles and fill them at their water bottle filling stations. They have them throughout the stadium. And then you can splurge on ice cream or a Cougar Tail, which is a super huge maple donut. 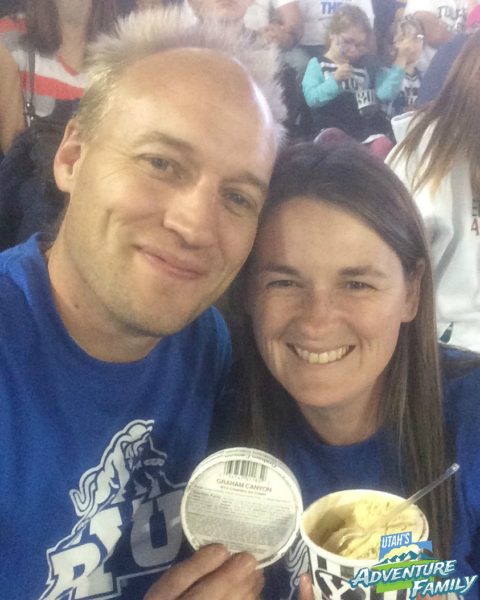 There are plenty of great treats at the game, too. We like to splurge on BYU creamery ice cream when we go. Graham Canyon is the best!

Finally, BYU football is played in one of the most beautiful places in the country. The Wasatch Mountains lie in the background with Squaw Peak standing boldly against the skyline. There is often a nice sunset to the west. We really enjoy these things as we sit down to a game. 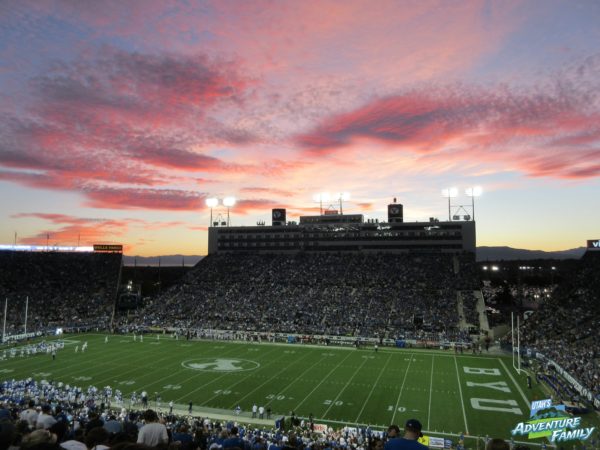 It is beautiful even in the stadium!

If you haven’t treated your family to a BYU football game, give it try. We’d go every week, if they’d just keep those ticket prices down. 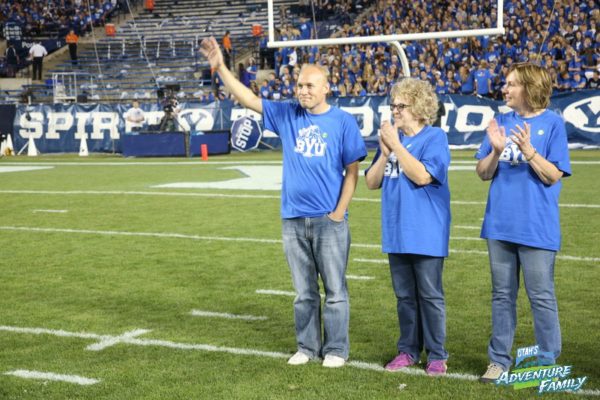 One game, our Dad got to be on the field! That was pretty amazing!