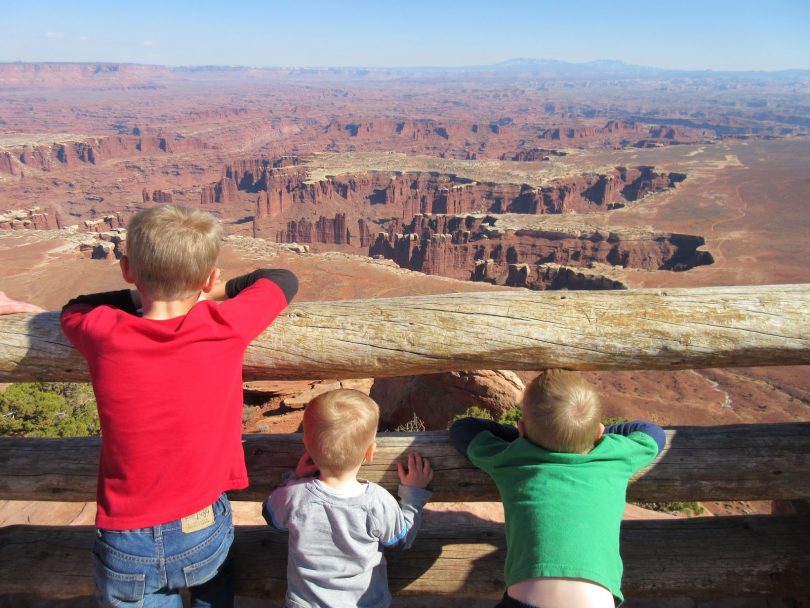 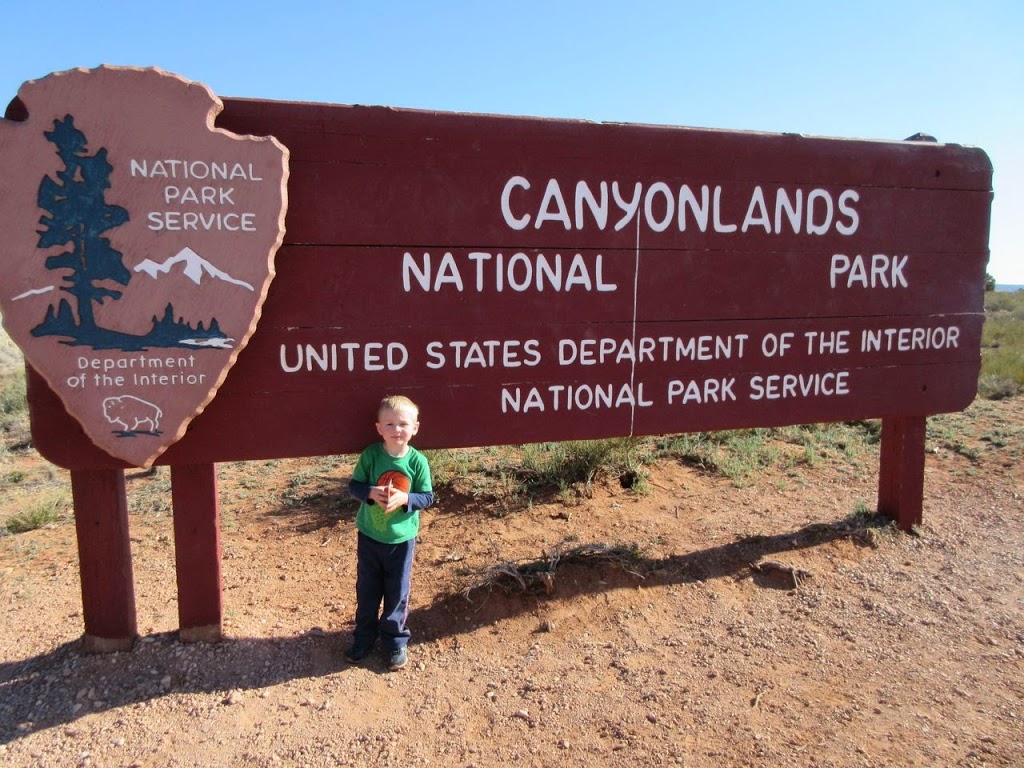 Canyonlands National Park is one of 5 parks located in Utah, and the only one we hadn’t been to before this year. The park is divided into three sections. Island in the Sky is the most popular and it is located on the north end. The Needles district is located on the southeast end, and the two sides do not have access to one another. The southwest side is called The Maze, and is undeveloped for serious backpackers and campers. (Check out our page called Canyonlands Hikes for Kids.)

The visitor’s center at Island in the Sky is small, but they do ranger talks, the junior ranger program, and they have a few small displays and a gift shop. (All the bathrooms in the park are pit toilets, so don’t plan on flushing anything porcelain while your in the park.) The rangers helped us a find a few hikes and all the essential turnouts for our three boys ages 1-7 years old.

This section of the park is shaped like a giant Y with the visitor’s center on the upper right arm. As we drove down to the junction, we passed a few pullouts that look down into the canyon lands that this park is named for. The first hike we stopped for was called Mesa Arch. Our 1 year-old did this entire half mile hike with very little help. The trail ascends to the rim up some shallow stairs and comes to the edge of the canyon. An arch, different from those in Arches stands at the edge. Getting too close to the arch could be fatal as it drops hundreds of feet, so keep a hand on little ones. The arch looks fairly small at first, but it extends down the cliff pretty far. There are some great photo opportunities, just don’t lean backward! The trail loops back to the car, and the hike is really pretty.

We continued down to the junction and turned up the other arm of the Y. At the very end is an interesting hike that is a bit steeper and includes a short scramble across the slick rock. They call this area Upheaval Dome, and we hiked only as far as the first overlook (.8 miles RT). When you reach the overlook, you can see down into a hole that has sharp white points sticking out of the ubiquitous red rock. It looks a little like teeth jutting up from sore gums. Scientists posit that one of two things happened: either salt pushed it’s way to the surface of the red rock, or a meteor struck here thousands of years ago. The signs leave it up to you decide.

We turned around at that point, because we had a hike that we were excited about back toward the junction. The Aztec Butte trail takes you two miles roundtrip up a large butte, with a side trail to see some ancient Aztec buildings. Read the sign carefully, or you’ll make the same mistake we did. We really wanted to see the Aztec granaries (used for storing grain, obviously) and skip the longer portion of the hike. Unfortunately, we weren’t careful sign readers, so when we came to a fork in the trail, we went right (we always choose the right when we’re unsure). This trail led us to Aztec butte farther back, and climbed right up the side. Steep slick rock, hand-over-foot climbing and an eventual summit over the rim greeted us. It was pretty difficult for our boys age 4 and 7, and Dad with a baby on his back (Mom is like mountain goat. She only lost her shoe once.) The trail led around the top of the butte and past an old Aztec structure, but people had added to the foundation, and it was obviously rebuilt– not very impressive. So, we climbed back down. When we reached the fork in the trail, we made the correct turn and climbed a small much more manageable butte and found the granaries. This hike would’ve been around a mile had we taken this route the first time (and we wouldn’t have risked our skins), but our boys saw it as a bonus adventure. If you take this hike, make sure to choose the left!

There is another short drive immediately across from Aztec Butte called the Green River Overlook. We stopped to look over, and it was very impressive. This is a necessary stop while you are in the park.

Finally, we drove down to the bottom tip of the Y (stopping at several overlooks along the way) for the Grand Viewpoint Overlook. This point is the highlight of Canyonlands Island in the Sky District. There are panoramic views here that allow you to see all the way into the haziness of Colorado as you are hundreds of feet above the valley floor.

There are a few other things for very serious adventurers in this section of the park (anyone up for 100 mile drive in a high-clearance vehicle that drops 1,000 feet over the first mile and a half to the valley floor?) but we felt like we spent just the right amount of time at Canyonlands.

Island in the Sky is just down the road from Dead Horse Point. Plan to spend a full day between these two adventures.