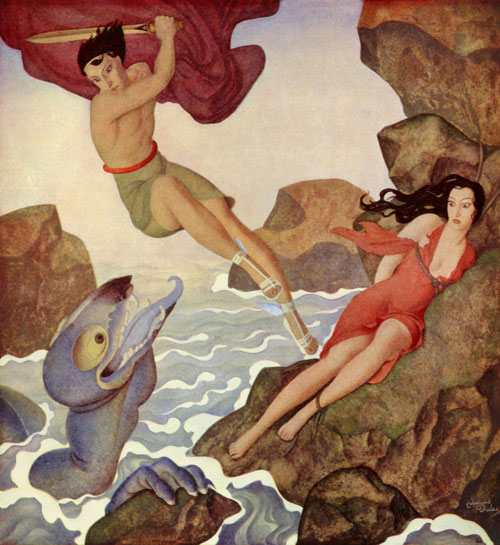 Stargazing is a cheap, easy, fun adventure. We live in the northern hemisphere, and on most nights, we can find constellations including: The Big Dipper, Little Dipper, Cassiopeia, Cygnus, Draco, Orion, Pleiades, Pegasus, Gemini and Taurus. We also find stars like Betelgeuse, Rigel, Polaris, Bellatrix, Vega, Albireo, Deneb, and Sirius.

In Greek Mythology, Cassiopeia had a big mouth. So big, in fact, that she bragged that her daughter, Andromeda was more beautiful than the daughters of Nereus. Nereus seems to be the Titan of the sea, though details are sketchy depending on source. At any rate, Nereus was mad and sent a sea monster named Cetus to ravage the coast. The oracle declared that the only way to get rid of the sea monster was to chain Andromeda to a rock and let Cetus eat her. Of course, Perseus was just returning from his battle with Medusa and happened up Andromeda chained (naked, might I add) to the rock. He defeated the sea monster and declared he would marry Andromeda. She was promised to another man, but after one look at Medusa’s head, that didn’t seem to be a problem anymore. Perseus and Andromeda were married.

To find the Andromeda Constellation, you must be able to find Pegasus first. That’s because Andromeda’s face is actually Pegasus’s bellybutton (assuming horses have a bellybutton). Andromeda looks like a curvy triangle hanging off the corner of the Great Square (which forms Pegasus’s body).

Be careful, some people see Pegasus’s front legs and think that they are Andromeda. To find her correctly, look for Cassiopeia. Andromeda hangs down off the square toward Cassiopeia. Her total length is more than the distance across the Great Square of Pegasus. His legs are much smaller.

Andromeda’s stars are pretty bright, but none of them are very significant.