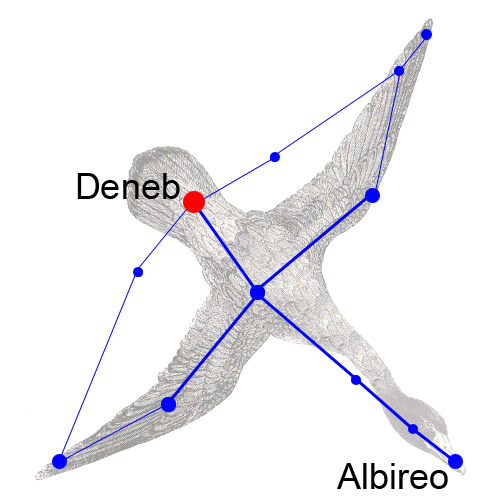 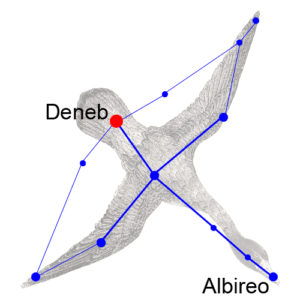 Stargazing is a cheap, easy, fun adventure. We live in the northern hemisphere, and on most nights, we can find constellations including: The Big Dipper, Little Dipper, Cassiopeia, the Winter Triangle, Andromeda, Draco, Gemini, Orion, Pleiades, Pegasus, Scorpius, and Taurus. We also find stars like Betelgeuse, Rigel, Polaris, Bellatrix, Castor, Pollux, Antares, and Sirius.

This entry will help you find the constellation Cygnus and the star Vega. Cygnus, also known as the Northern Cross, is an intermediate constellation to find. Cygnus means swan, and this constellation is supposed to look like a swan. One myth has it that Zeus had an affair and turned into a swan to escape Hera’s wrath.

The easiest way is to locate Cassiopeia. Follow the three stars that line up in Cassiopeia along the Milky Way (if you can see it) to Cygnus. Or think of it this way. Cassiopeia looks like a crooked M with a big first hump and a smaller second hump. You can follow the line formed by Cassiopeia right to Cygnus.

Here’s a view of Cassiopeia to help:

The stars of Cygnus are mostly insignificant. The tail is called Deneb and is the best known. Albireo is the head. Though not very well-known, Albireo is pretty cool because it is a double star. On a clear night, you can tell there is something different about it with binoculars.

Nearby is a very significant star– at least, it has a car named after it. Vega is off the left wing of Cygnus in the constellation Lyra. Vega is significant because it is the most studied star (after the Sun) in the sky. In fact, it is the benchmark for measuring the brightness of all the stars in the sky. Additionally, with Deneb and Albireo, it makes up what is often called “The Summer Triangle.” 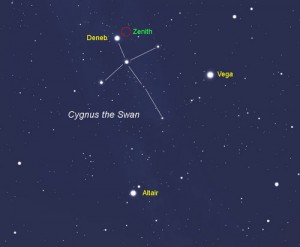