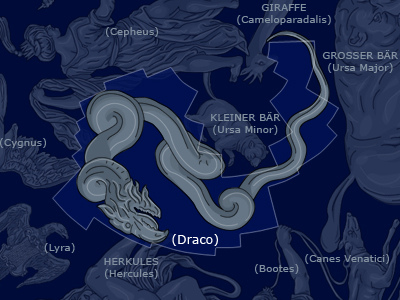 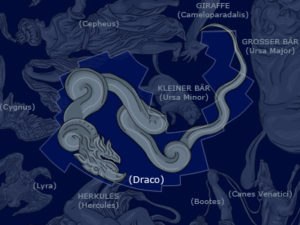 Draco the Dragon (from Wikimedia).

According to Greek mythology, Draco might represent the dragon Ladon which guarded the golden apples. Of course, Hercules had to kill Ladon as one of his 12 labors. It is more likely, though, that Draco is one of the Giant Titans that battled the Olympians. According to this myth, Minerva (Athena) tossed the dragon into the sky, and he froze around the northern pole of the sky.
This legend makes Draco a really easy constellation to locate. Some of the stars are a little dim, though, so this is a less popular constellation. If you can find the Big and Little Dipper, Draco is easy. To find Draco, locate the Big Dipper and Polaris. Halfway between the lip of the cup and the North Star (Polaris) is the very tip of Draco’s tail. His body goes between the dippers and circles halfway around the Little Dipper. Then his head turns back on his body. Check out the picture below.
If you are familiar with our entry on Cygnus and Vega, you’ll notice that Draco’s head turns right back near Vega. In fact, Vega, which is very bright, is just off the right side of the dragon’s head.
Draco has no significant or well known stars.