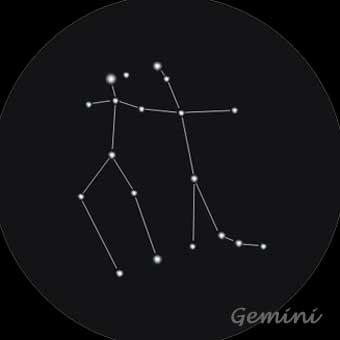 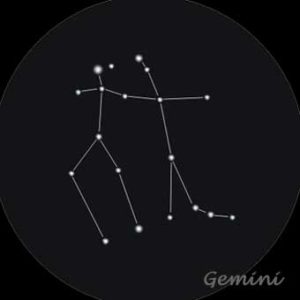 Stargazing is a cheap, easy, fun adventure. We live in the northern hemisphere, and on most nights, we can find constellations including: The Big Dipper, Little Dipper, Cassiopeia, Cygnus, Draco, Orion, the Winter Triangle, Pleiades, Pegasus, Andromeda, and Taurus. We also find stars like Betelgeuse, Rigel, Polaris, Bellatrix, Vega, Albireo, Deneb, and Sirius.

Last night I saw Orion, Taurus, and the Pleiades for the first time in a long time. That’s because they are only visible in the late fall and winter. During the summer, Orion is “up” in the day with the sun, and, of course, invisible here in the Western U.S. I was excited because the return of Orion means you can also find the constellation Gemini, and it’s two famous stars, Castor and Pollux.

In Greek mythology, Castor and Pollux make up the twins (Gemini), both sons of Zeus from separate mothers. They have many adventures, including traveling with Jason on the Argo and rescuing their sister Helen of Troy. They even start the Trojan War. Castor is killed while laying in ambush for an enemy, and Pollux then kills the enemy. Zeus offers his son, Pollux eternal life with the option of giving half his immortality to his brother. Thus, Castor and Pollux are placed in the night sky.

Castor and Pollux are very bright stars that are easy to identify. The rest of Gemini is a little sketchy. To find Castor and Pollux, locate Orion’s belt. The star that represents Orion’s head (to me, in reality, it’s his armpit) is Betelgeuse. The twins are actually standing on Orion’s head, and can be seen above and slightly behind (back to the left).

Many cultures have seen people in these stars, not just the Greeks. I think it takes a lot of imagination to see much, even on a really clear night. 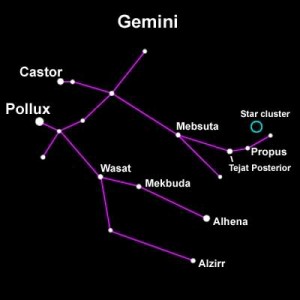