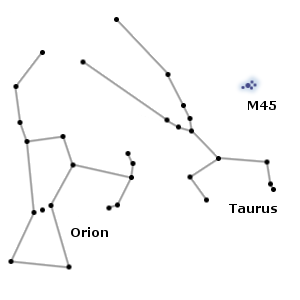 Remember how Atlas the Titan had to take the sky upon his shoulders? When he did that, Orion, the hunter was free to chase his 7 daughters, the Pleiades. Zeus felt bad for the beautiful daughters of Atlas and turned them into doves. Unfortunately, the sisters were so upset by the fate of their father, that they committed suicide. Zeus took them and set them in the heavens, altering their form into stars this time. They can be seen in the heavens running away from Orion.

The story doesn’t end there, though. The Pleiades have 5 more sisters (apparently Atlas stays pretty busy). They are called the Hyades. Their brother was killed by a wild boar, and Zeus took pity on them and placed them in the heavens, too. More importantly, these 5 sisters make up part of the constellation called Taurus. 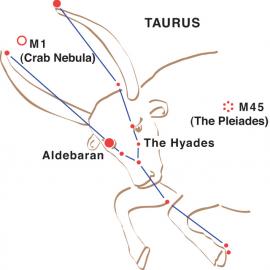 Here is the constellation Taurus with the Hyades cluster forming his face. (Image from Star Date.)

To find Taurus and Pleiades, first find Orion. (Use the link at the top of the page is needed). Orion’s sword is always trailing behind him, so generally, you can think of him as moving to the “right,” though he may be laying down as in the picture above. The Hyades, or Taurus are directly in front of him, blocking his route to the seven sisters. The Pleiades are a little farther on, and appear as a cluster. You won’t really be able to see all seven stars. The real sky will look more like this: 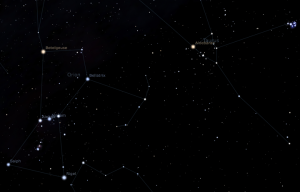 One last note: If you can’t find Pleiades in the sky, you can always look on the back of a Subaru. The logo is, indeed, the seven sisters. There are only 6 stars because only 6 companies merged when Subaru was formed. Subaru is the Japanese form of the word Pleiades.