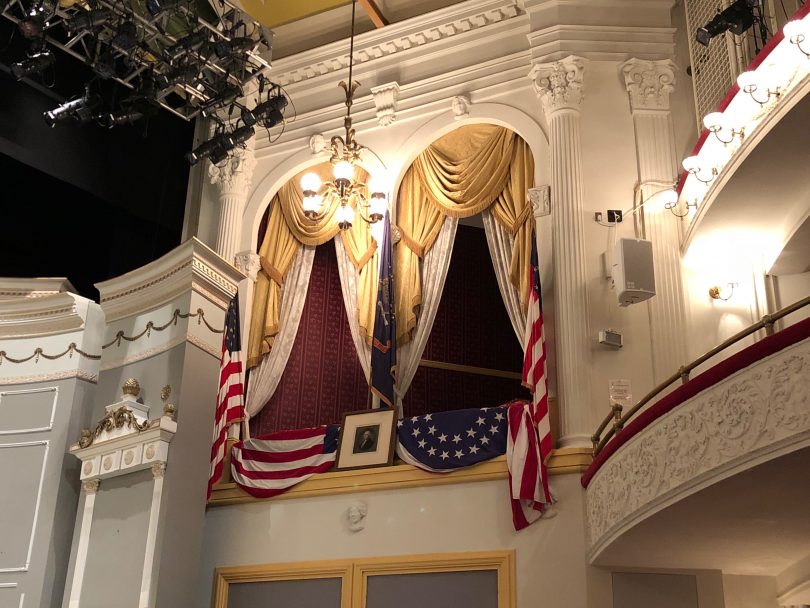 Ford’s Theater was our favorite stop in Washington, DC. This theater where Abraham Lincoln was shot is now run by the National Park Service. It includes the rebuilt theater, a beautiful museum, and an active Junior Ranger Program.

Tickets for the Ford’s Theater Tour include a walk through the museum, a tour of the theater, and a visit to the house across the street where Lincoln died the morning after the shooting. Tickets can be reserved ahead of time for a $3 fee, but there are also free same day tickets available. Make sure to check the schedule for entrance times because tickets are timed.

Ford’s Theater is just east of the White House. It lies on a narrow street and still has active shows performed on its stage. The reconstructed President’s box where Abraham Lincoln was shot by John Wilkes Booth, a frequent actor at the theater, sits above the stage on the right. But before you get to the theater, you’ll start at the museum.

The museum is really interesting. It takes you through Lincoln’s Presidency. You get personal insight into the character and wit of the President through anecdotes and stories about him. If he wasn’t already your favorite President, he will be before you reach the theater. There are actual artifacts in the museum as well. These include the contents of John Wilkes Booths pockets as well as small pistol he used to commit the murder, which he dropped on the floor. The museum takes you all the way through the assassination and ends in the theater.

Eventually there is an announcement telling you to move to the theater. (Don’t hurry in the museum, there is plenty of time. You don’t need to rush through the exhibits and then sit in an empty theater.) When everyone is seated, a National Park Ranger tells the story of the assassination. Though I’ve read several books on Lincoln’s life, I was still surprised at some of the details I hadn’t heard before. After this talk, which is quite emotional, it is time to cross the street to the Petersen House.

After Lincoln was shot, he was rushed across the street and laid on a bed in the Petersen House. It’s a somber moment as you walk through the room where Mary Lincoln wept and into the room where Abraham Lincoln died. The actual bed still sits in the room where Lincoln passed away. The rest of the museum takes you through the manhunt for Booth, who was shot and killed a few days later. It includes the execution of three men and a woman who were convicted of assisting in the assassination. The final thing to see is a tower of more than 15,000 books that have been written on Lincoln’s life and legacy.

A trip to Washington, DC without a trip to Ford’s Theater is incomplete. There are so many things to do in this city, but Ford’s Theater cannot be missed.