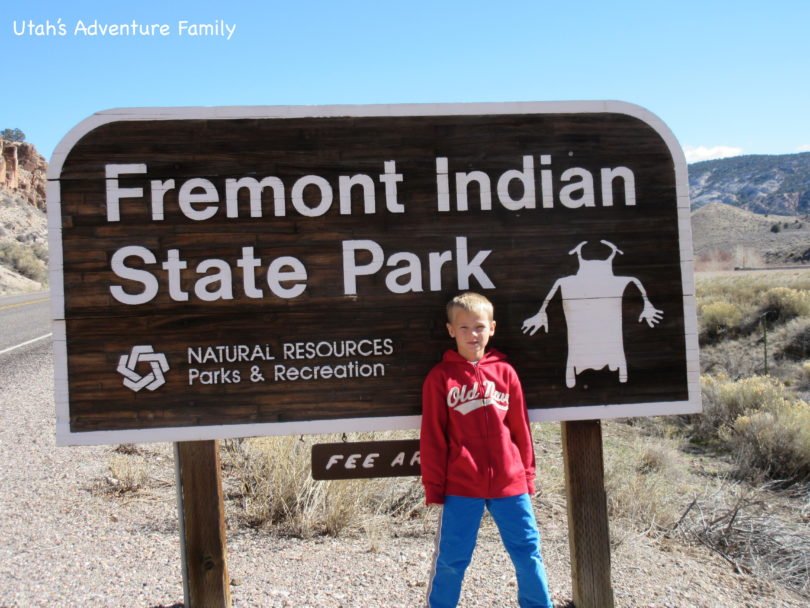 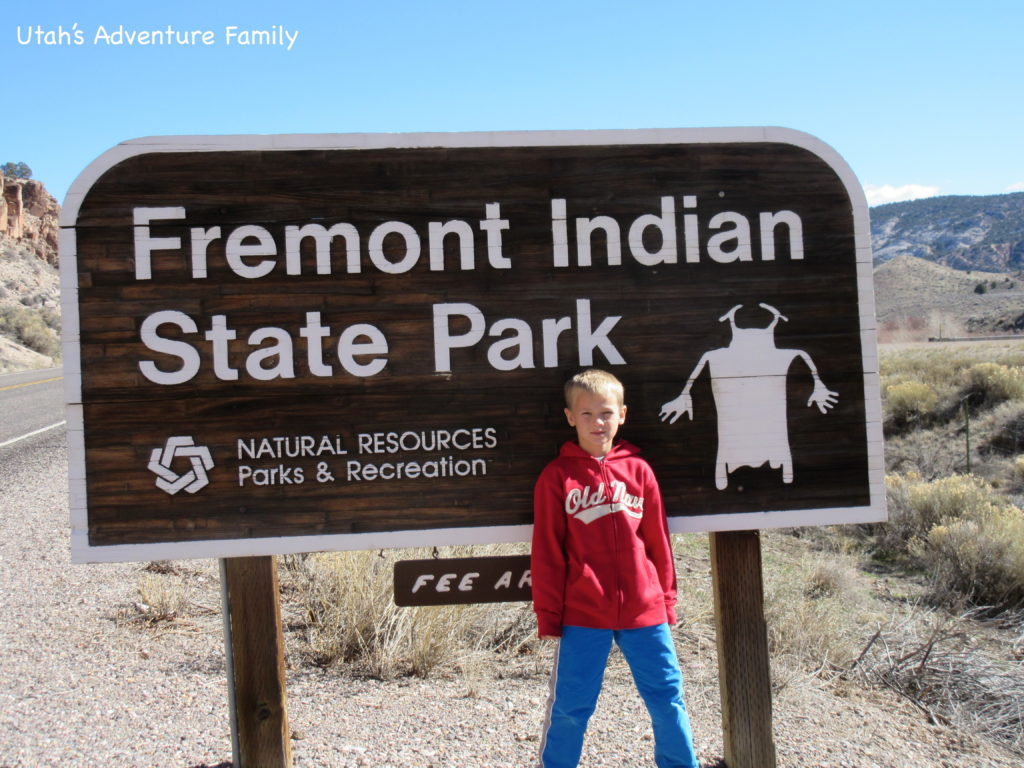 Fremont Indian State Park has hikes, a visitor’s center & museum, campgrounds, and a drive with points of interest. We started at the Visitor’s Center and had our boys participate in the Junior Ranger program. There are also detailed cards available in the Visitor’s Center that describe everything you will see on the Cliff View Trail (the drive with stops). We found these very helpful as we traveled throughout the park.  The museum is large and houses many Fremont Indian Artifacts. There is also a kid section that has a pit house for the children to climb in and around, as well as books, microscopes, and puzzles. 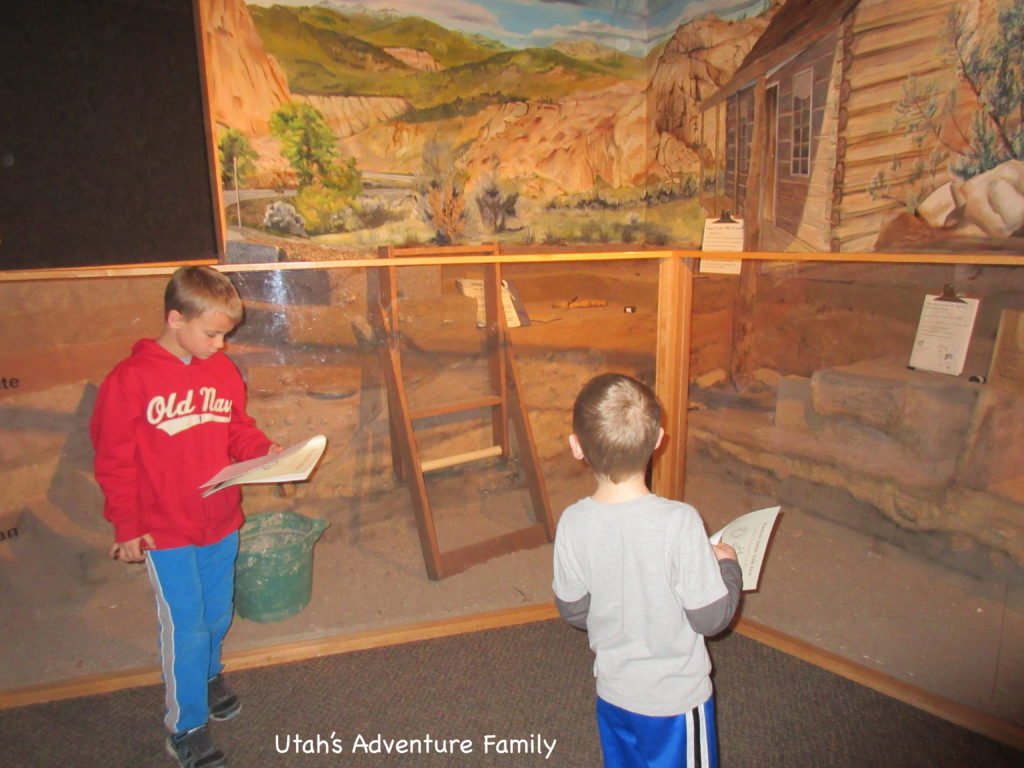 Our boys are working on their Junior Ranger booklets at this mock excavation site. 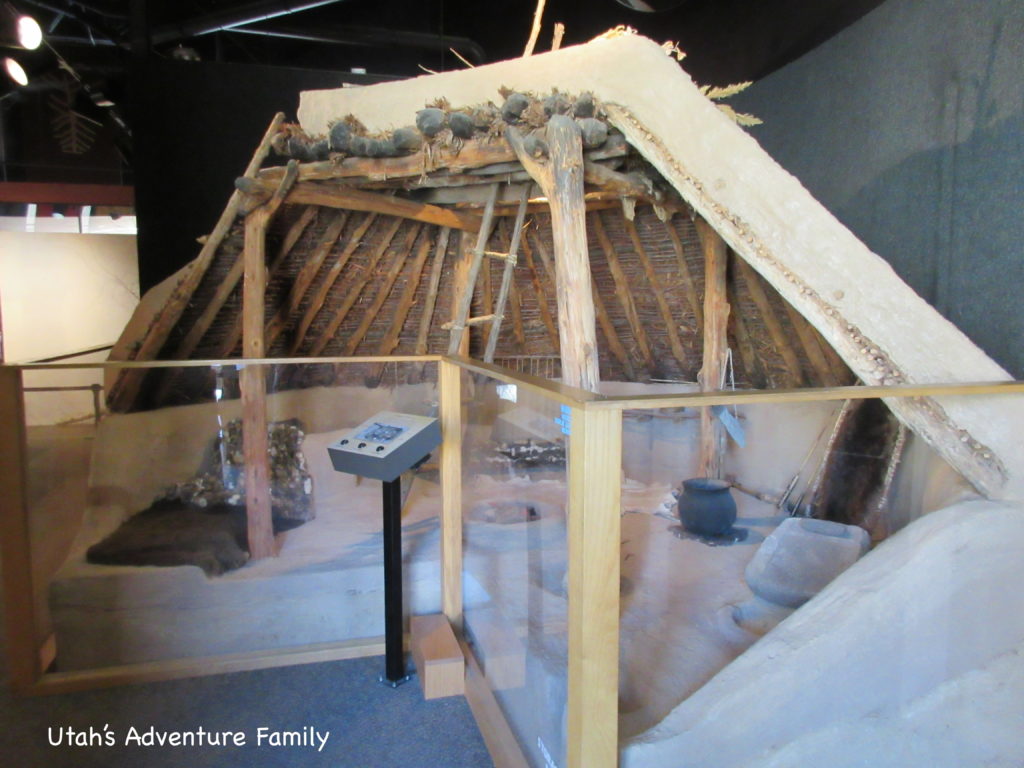 There is a great display of what a pit house would have looked like. 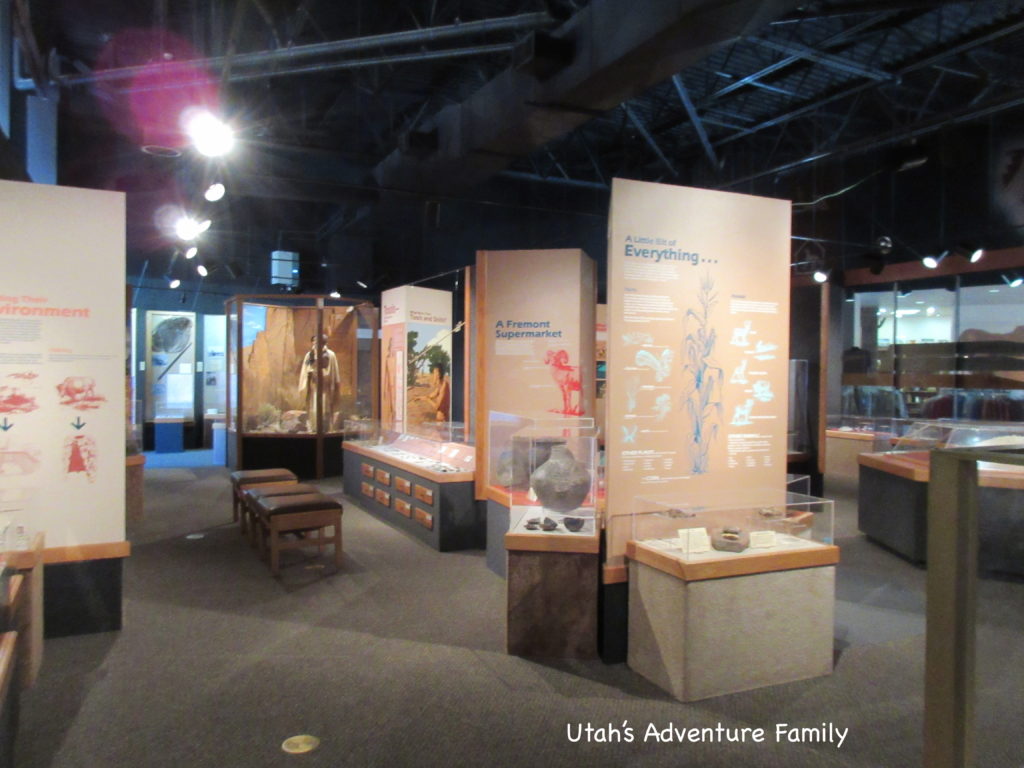 The museum houses tons of artifacts. The ranger told us 3/4 million! I’m sure that they aren’t all on display, but there is a lot to see. 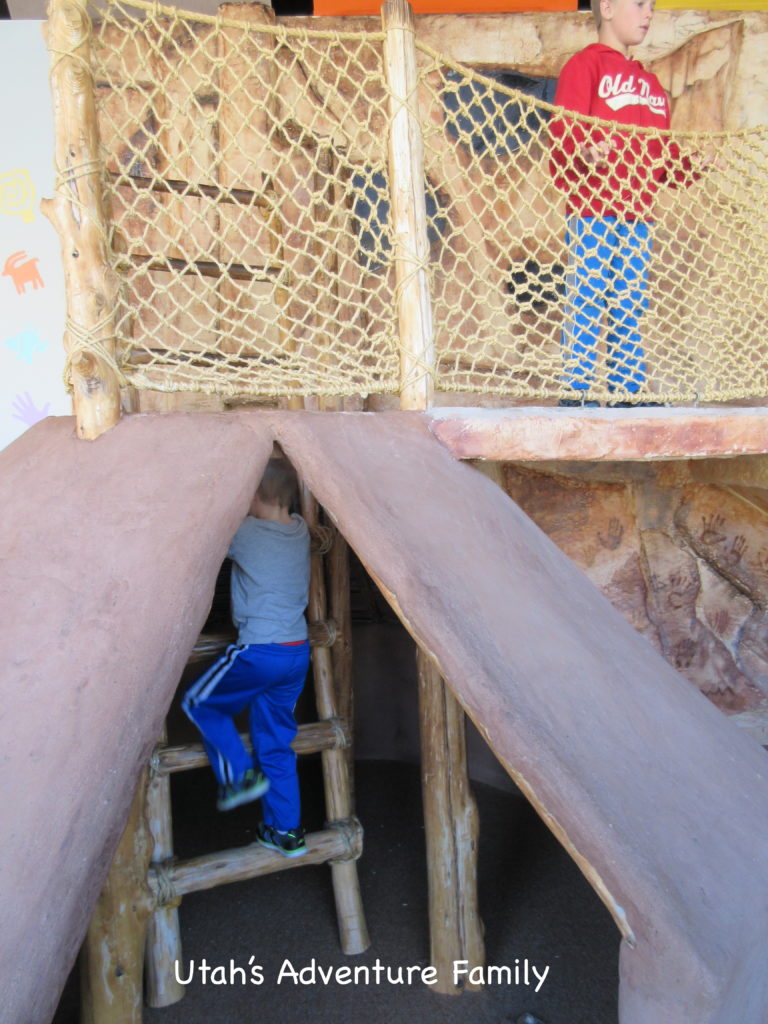 Their is a pit house that the children can play and climb in. 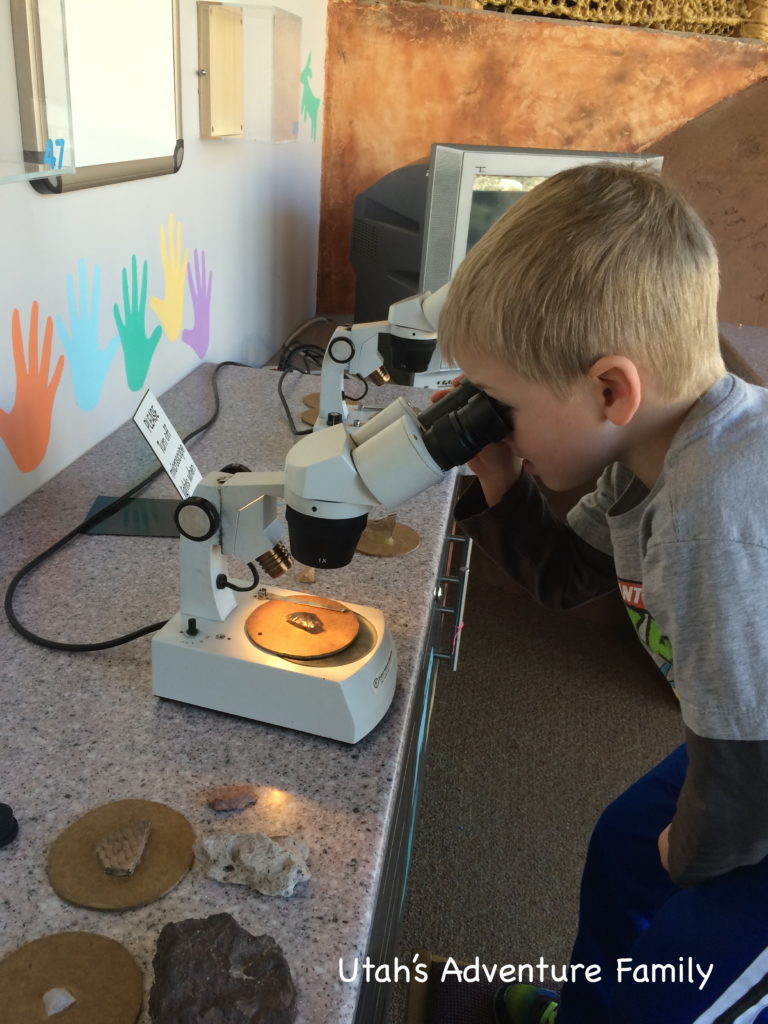 The microscopes were a lot of fun!

The park focuses on the Cliff View Trail. This trail is a drive that you can take from one end of the park to the other. There are 14 points of interest with most being stop and look locations. There are a few short hikes to see the different numbered locations. We didn’t see all of the points of interest, but what we saw was amazing. There are some great ruins here.

Stop #1- Newspaper Rock: Not to be confused with Newspaper Rock in Canyonlands, this is a pull off where you look onto the cliff face for rock art. There is a section with many images hence the name newspaper rock, but there are also some other panels including a very well preserved person. 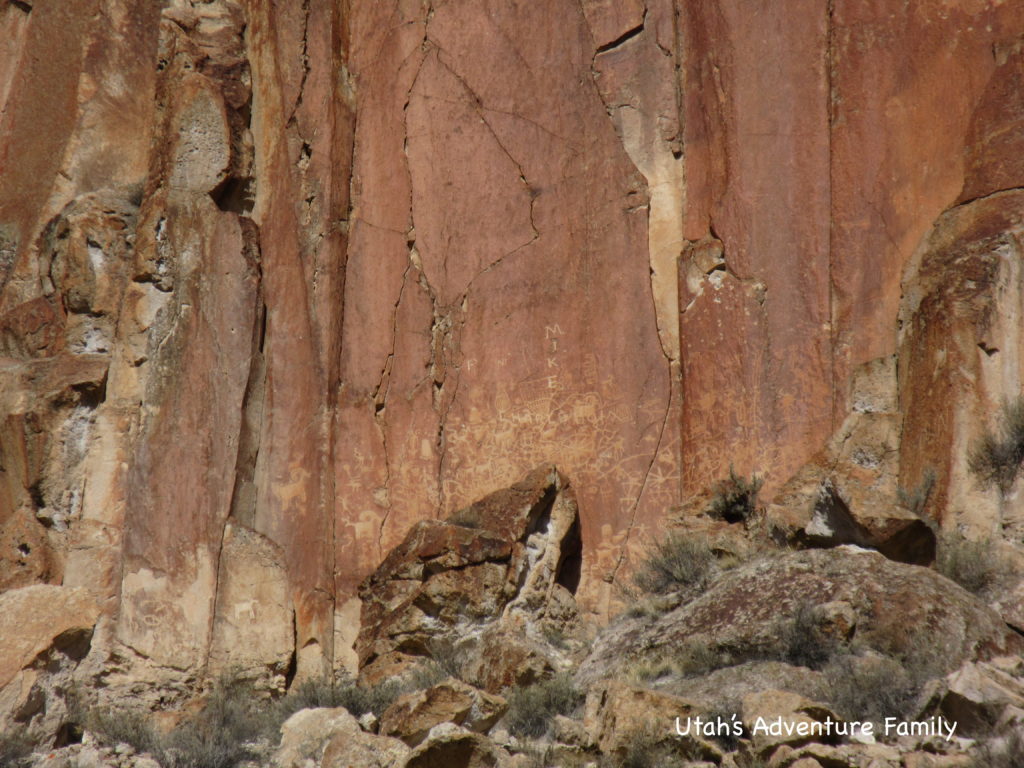 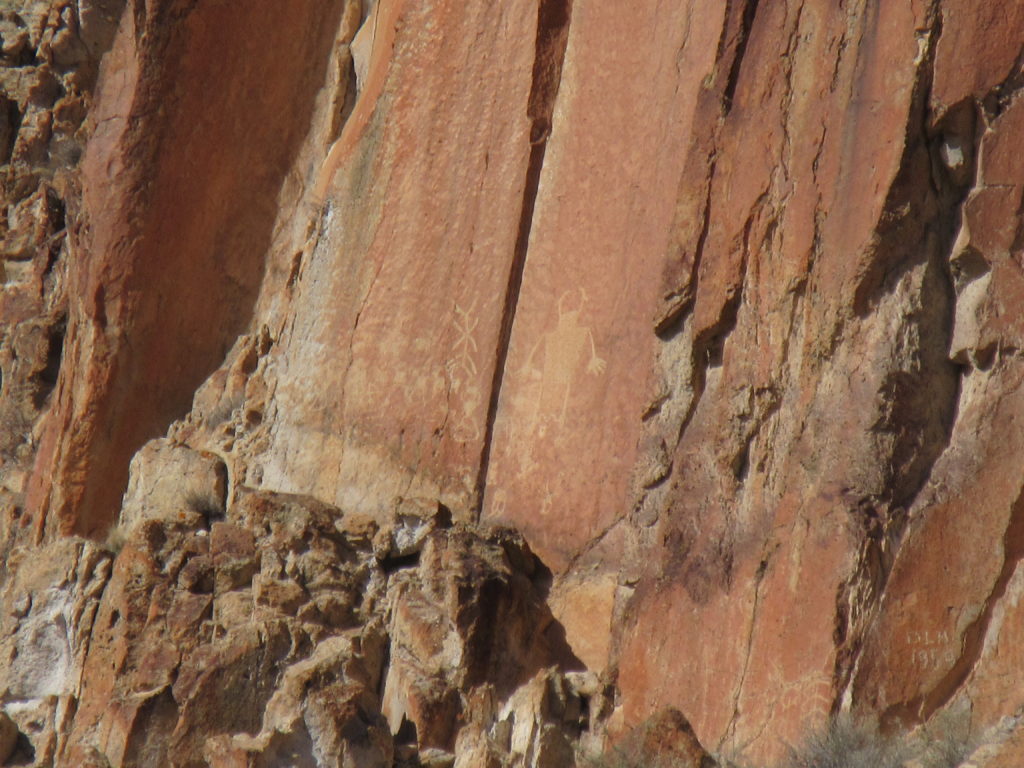 Another panel near Newspaper Rock

Stop #5- Parade of Rock Art Trail: This trail is right behind the Visitor’s Center/Museum. It is paved, flat and short. It features a lot of the rock art in Fremont Indian State Park. Make sure to take the card from inside the visitor’s center with you on this trail, so you can locate the rock art easily. 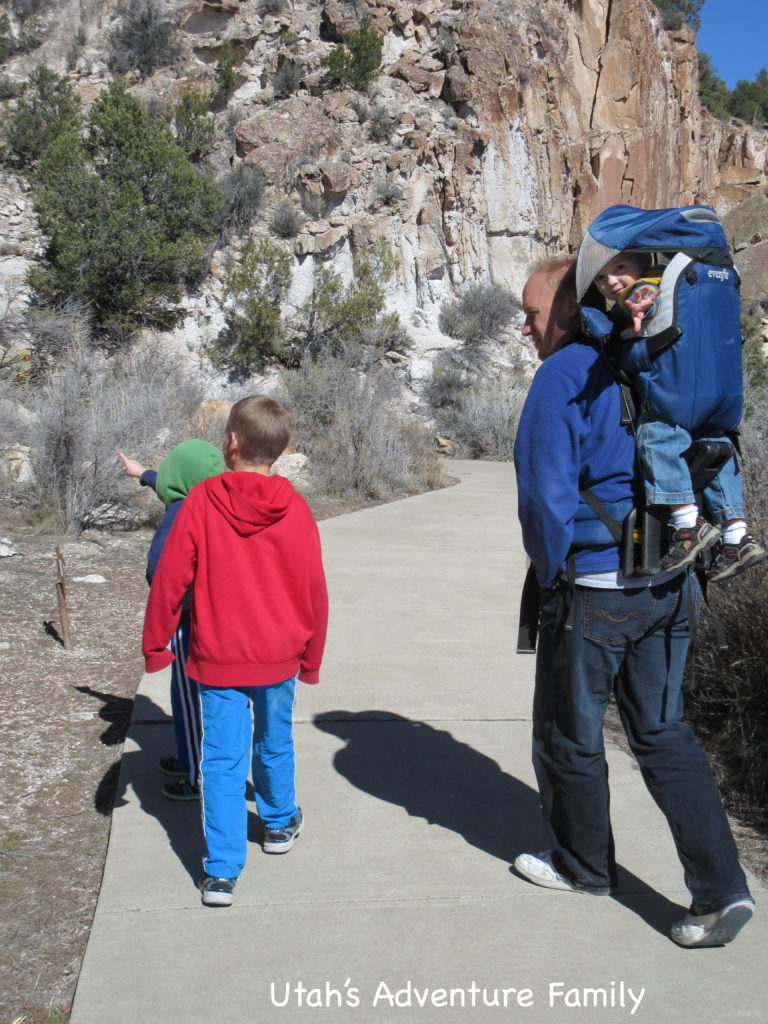 This trail is paved the entire way. 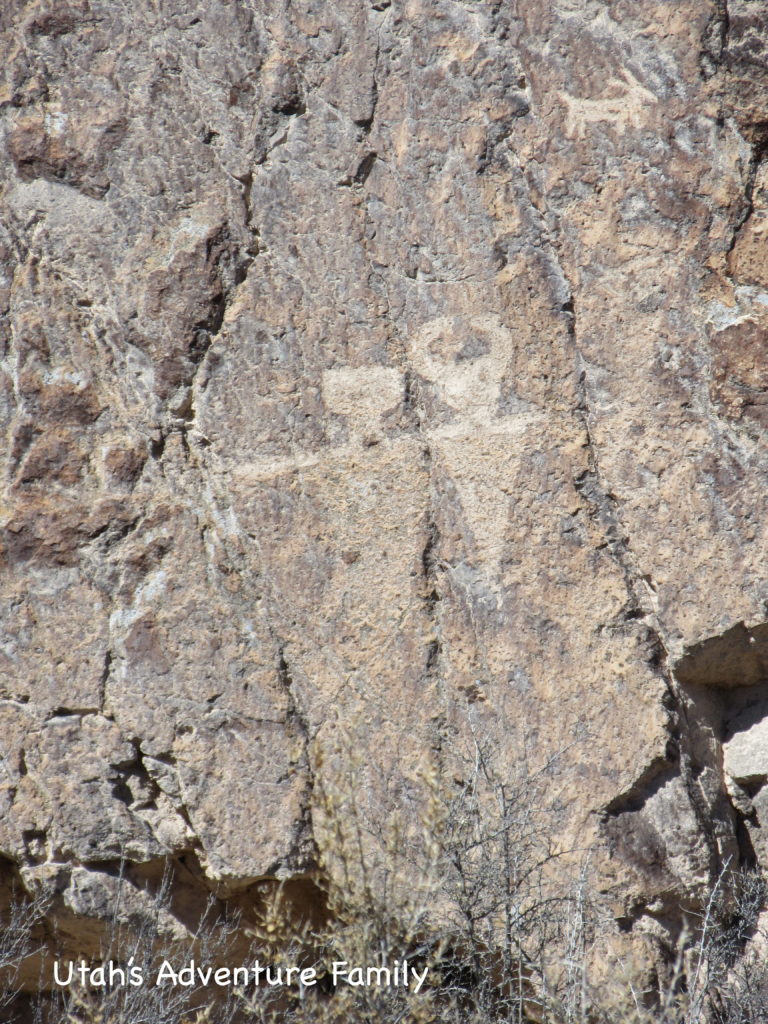 These are pretty standard depictions by the Fremont Indians. 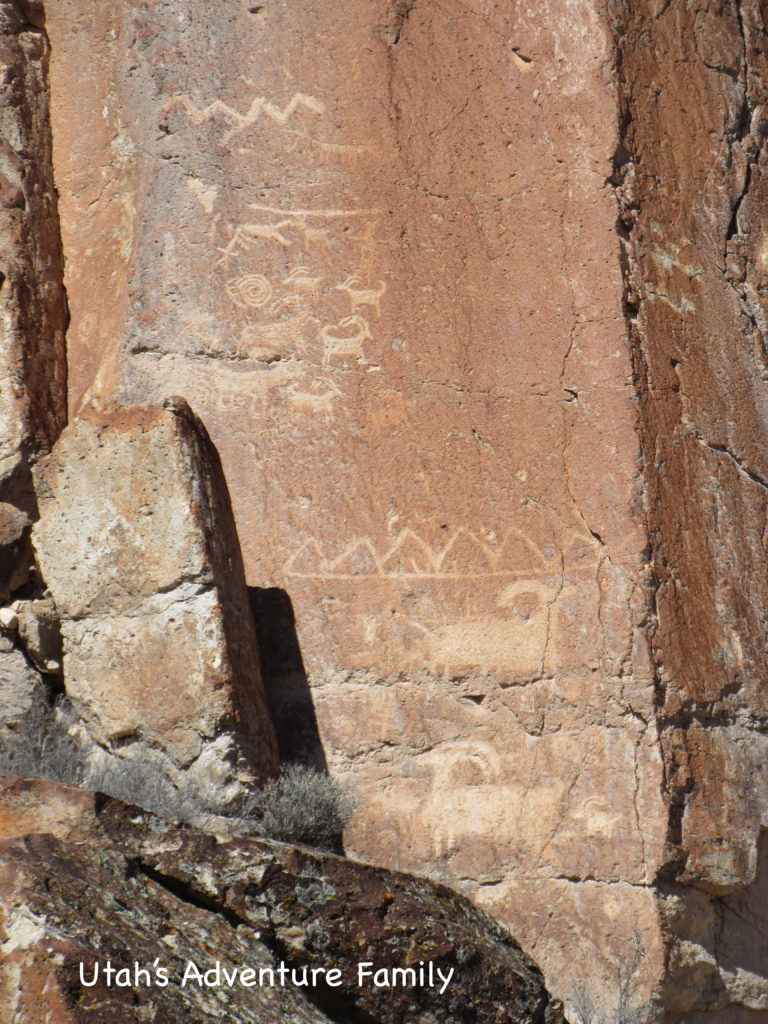 This trail had a lot of clear rock art.

Stop #7- Granary: I think this is also the beginning of a trail, but this is located across the parking lot from the Visitor’s Center. You can see a large granary that the Fremont Indians use to store grain. It has a pretty narrow opening, and my son asked how they got the grain back out once it was dumped inside. I wasn’t sure. 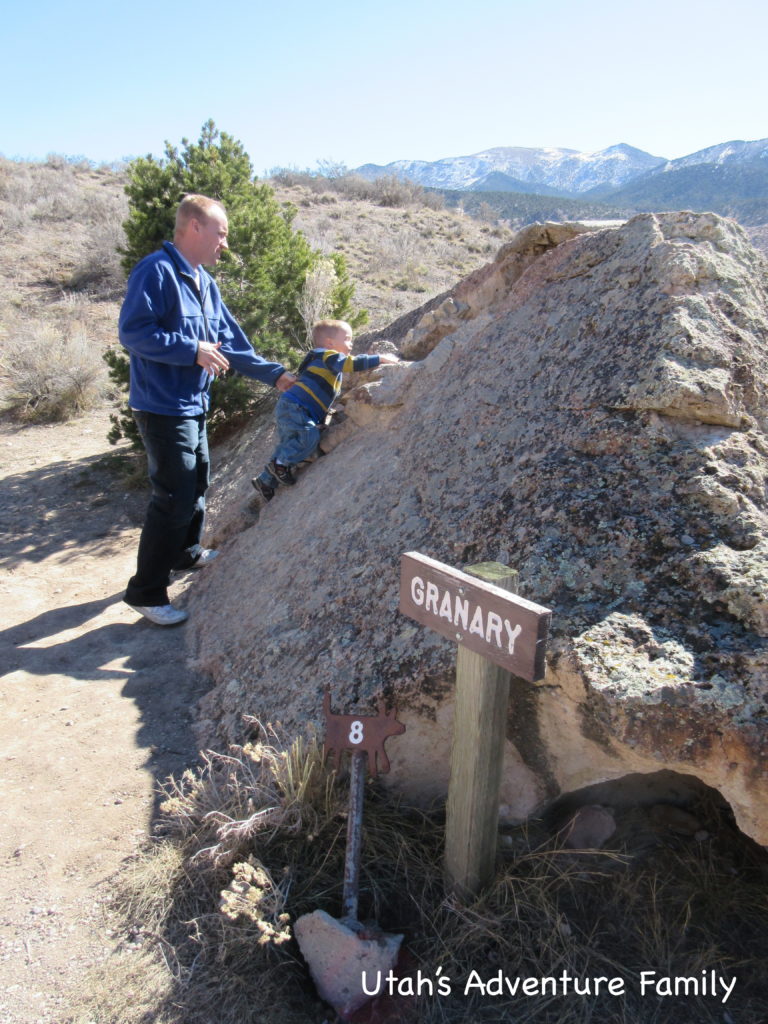 Looking inside the granary.

Stop #8- Pit House: This is a pit house that you can climb down inside and explore (it’s right next to #7 near the Visitor Center parking). Our boys love doing this. Be careful on the ladder, but you can see what it would be like to live down in the ground. 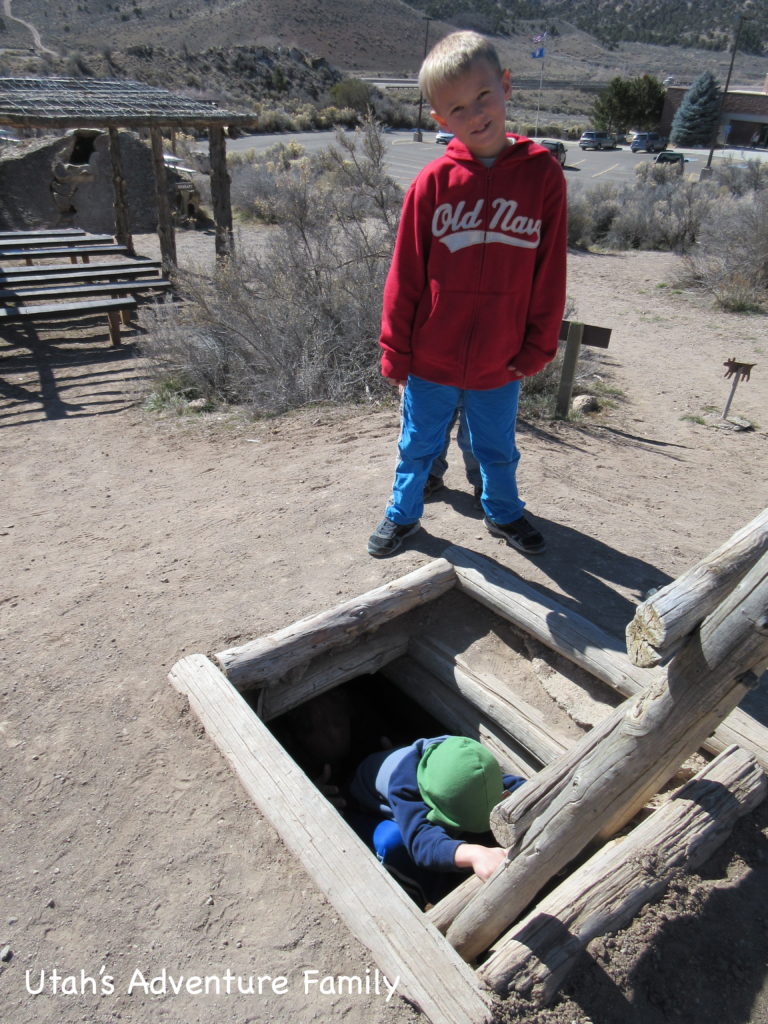 Climbing down into the pit house. You can see the visitor’s center in the background.

Stop #9-Cave of 100 Hands: This is a 1/2 mile hike, but it’s very flat the entire way. You walk under I-70 next to a small stream and come to a cave with handprints inside. It is gated off now to prevent graffiti, and there are actually only 31 hands, not 100, but it is still impressive to see. 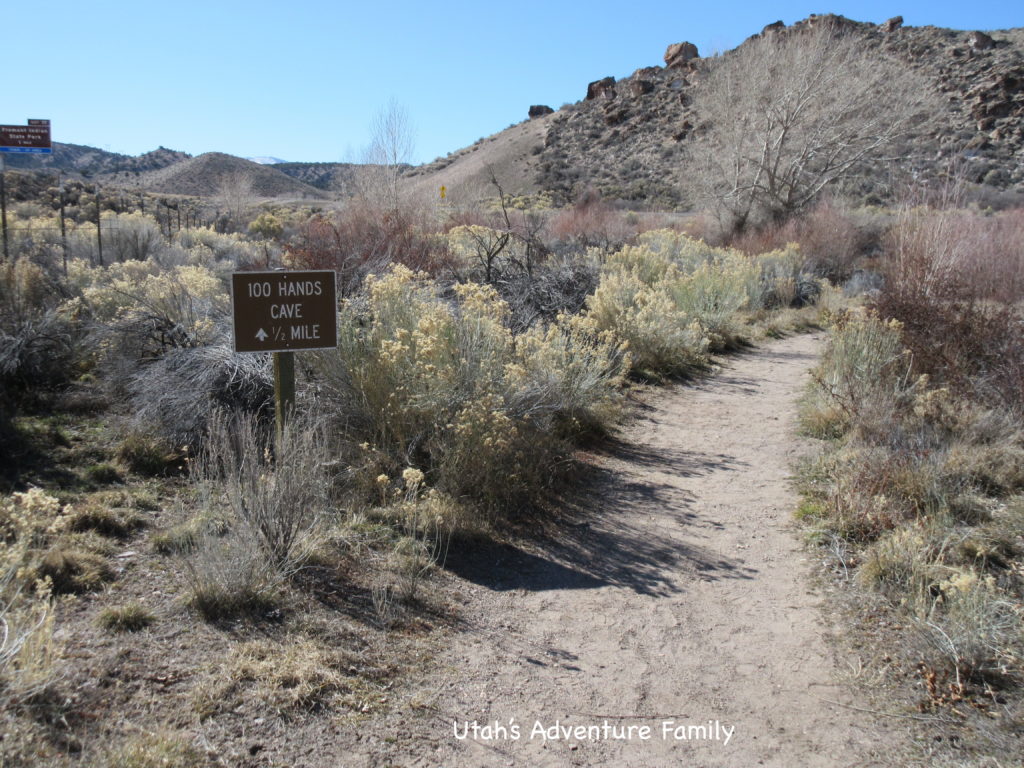 The trail is this flat the entire way. 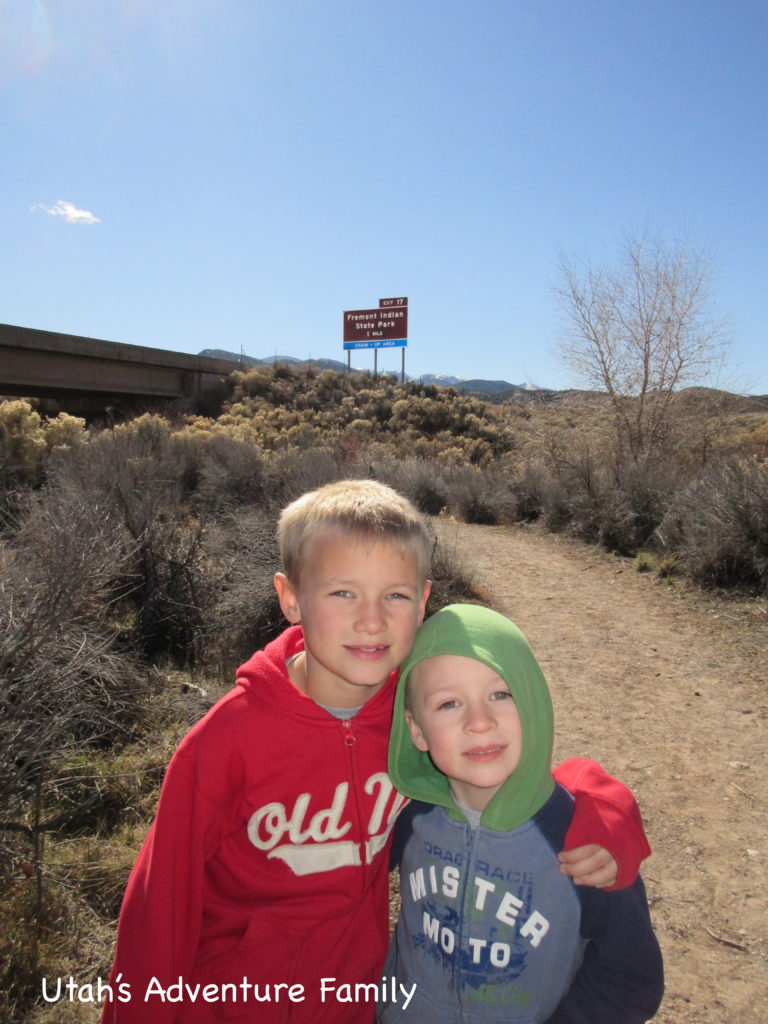 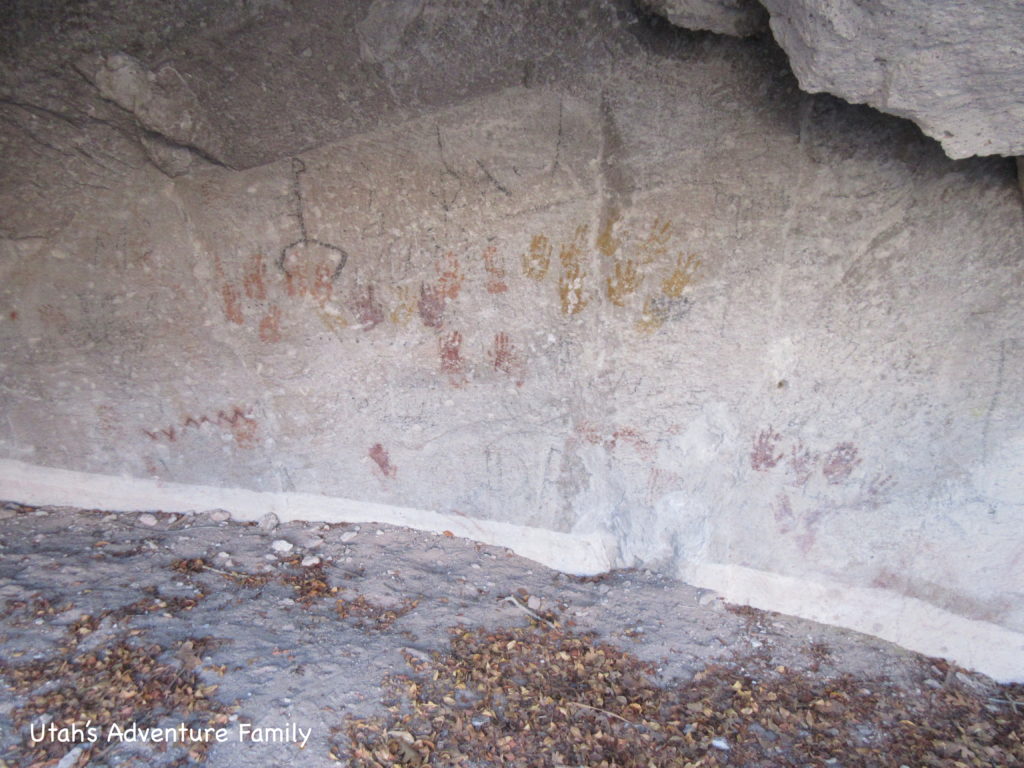 Stop #10-Arch of Art: This is a stop and view point. We drove slowly next to these panels of rock art. The rocks look curved at the top and were named after arches even though they are not arches. We used the card to help us with the rock art information here, too. And for some reason I didn’t get pictures at these last two stops. 🙁

Stop #11-Pioneer Cabin: There is a small pioneer cabin to look inside next to a picnic area with pit toilets.We didn’t stay here, but it would be a nice place to eat lunch.

There are a few longer hikes, as well as some other stops that we didn’t make it to, but we had a fun time at Fremont Indian State Park. It’s easy to see some great rock art even without hiking in this park. They also have a campground and some ATV trails. Entrance Fee to the park is $6/car, and there are other fees for camping here.

If you like Native American artifacts and/or rock art, here are some other locations in Utah worth checking out: Hovenweep National Monument, Newspaper Rock, or Edge of the Cedars State Park,