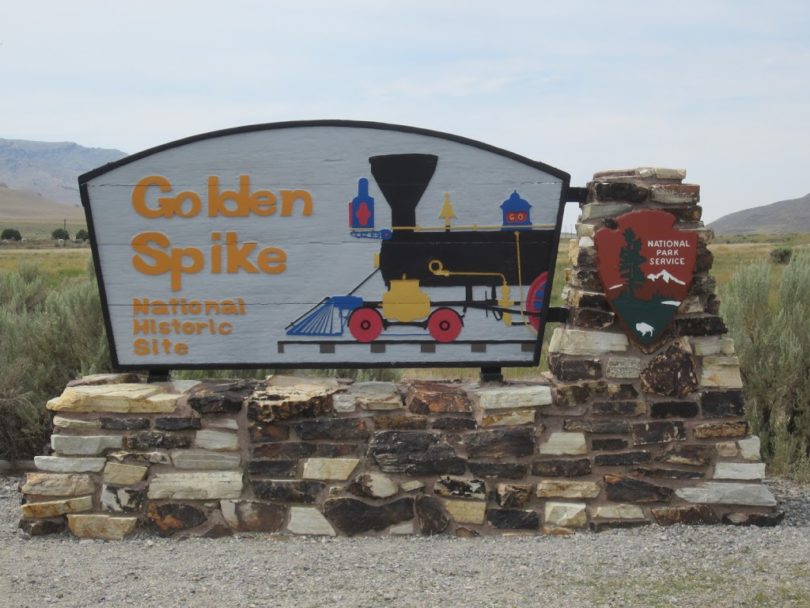 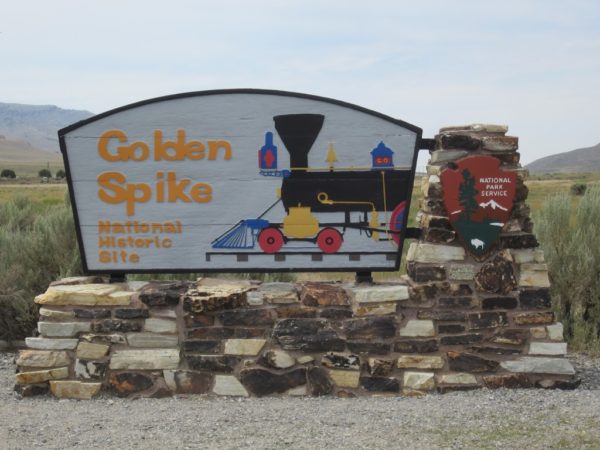 For Pioneer Day this year, we headed up to Golden Spike National Historic Site. This park is in the northern part of Utah about 30 miles west of the 1-15 Corinne Exit. If you head this way, make sure to stop at Spiral Jetty and the ATK Rocket Display. Both of these are free adventures near Golden Spike.

The Golden Spike National Historic Site was established as a park to remember the meeting of the Central Pacific and Union Pacific Railroads in 1869. These two companies were racing across the country in order to complete the first transcontinental railroad. This had huge significance for the entire nation because being able to travel across the United States in 6 days sure sounded better than 6 months. It truly changed our nation. On May 10, 1869 a huge crowd gathered at Promontory Point, in the middle of nowhere, to watch these two railroads meet. They used 4 spikes to complete the railroad–two gold & two silver.

This park has replicas of the two trains that were there: the Jupiter and the No. 119. During the winter they are kept in a storage house where you can view them, but between May and September they bring them out and drive them. This was one of the best parts of the visit, at least for our boys. On Saturdays and holidays, they also reenact the Golden Spike ceremony. We found it fascinating to hear the history and watch them replay what happened that historic day. Our youngest two boys (4 and 1) got a little antsy, but our 7 year old really liked it, too. We highly recommend going on a day when you can see the reenactment–why drive all the way there and not watch it? 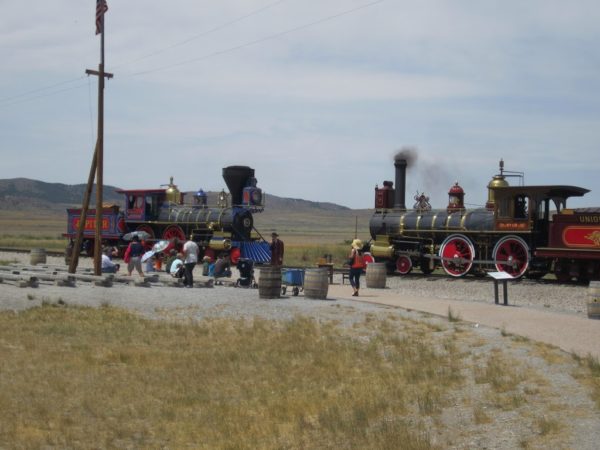 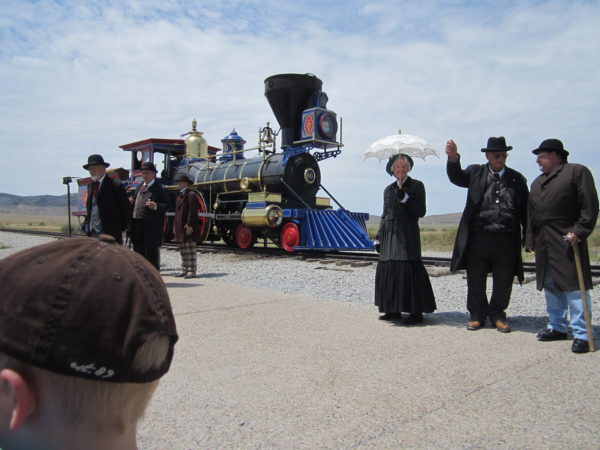 This is part of the reenactment, which we felt was the most exciting part of our day. 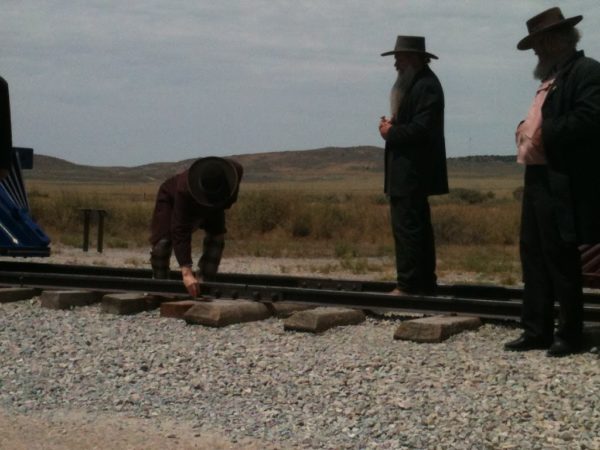 The driving of the Golden Spike! 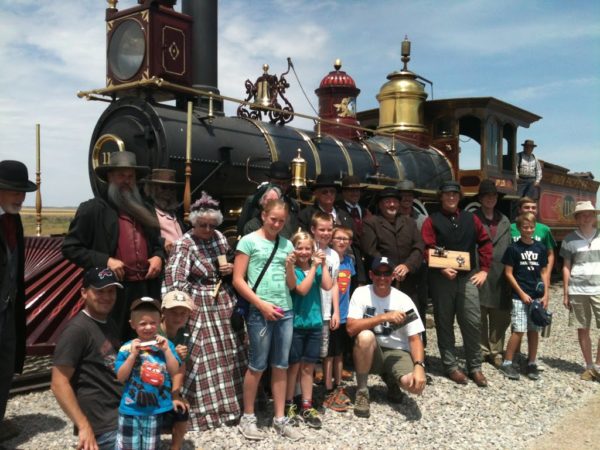 They let everyone who wanted to come up and take a picture with the reenactment cast. 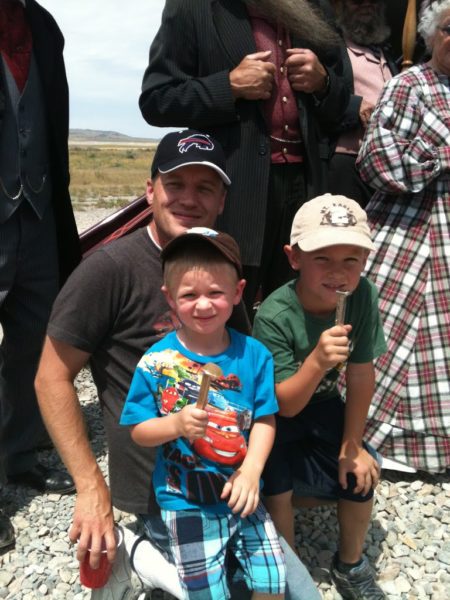 Our boys got to hold two of the spikes. They thought it was amazing!

The park also has a small museum with a few artifacts and lots of train movies to watch (no, neither of the Golden Spikes are here, just replicas. The “final” spike is at Stanford University). Our boys participated in the Junior Ranger program, as well as the Junior Fireman, and earned a badge and a patch. There are also two drives where you can drive on the actual old rail lines that the train followed. We only drove the shorter East route, but it actually was one of our favorite parts of this adventure. Because the road is where the train ran (they’ve just pulled up the rails), you feel like you are riding on a train through narrow cuts and bends. We found a natural arch called Chinese Arch on this drive, which made East drive worth it.

It only costs $7 dollars to enter this park, but they also have free entrance days. May 10th every year is free because it’s the anniversary of the actual ceremony. There is also a free day in August when they hold the Railroader’s festival. This year it is August 10th, 2013. On these free days they have lots of activities going on, as well as the reenactment and train runs. Check their website for more info. 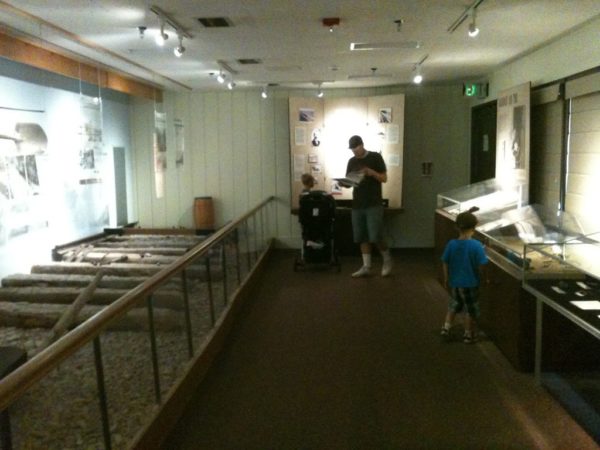 This is the small museum where you can work on the Junior Ranger Program. 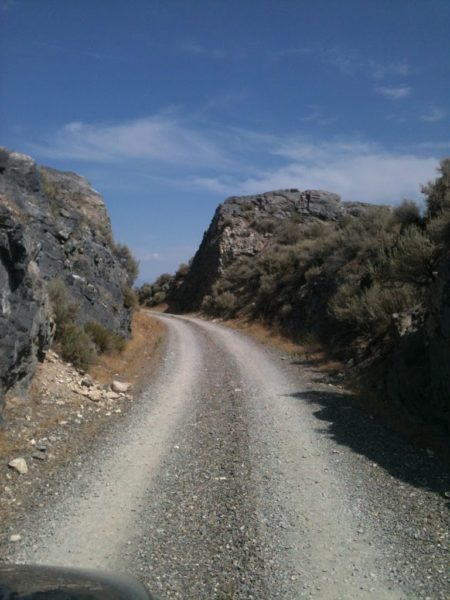 Here is a section of the East Route. 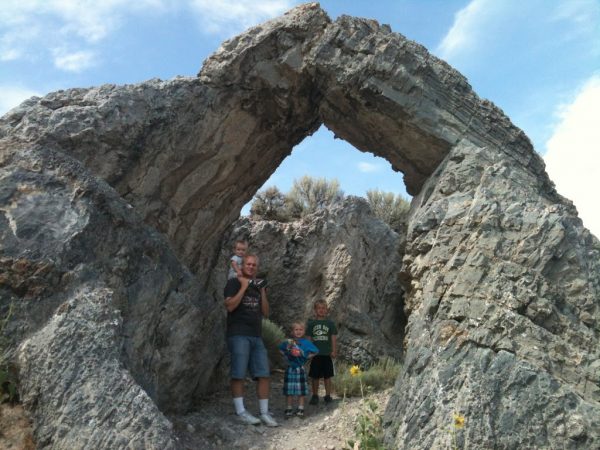 Make sure to stop at Chinese Arch.

This is a super short video, but it shows both trains driving. (They begin by going backwards, and then come together. The No. 119 also drives a longer route as you’ll see). The Jupiter used wood for fuel, so it went pretty slow, and the No. 119 ran on coal–we liked how this train sounded.