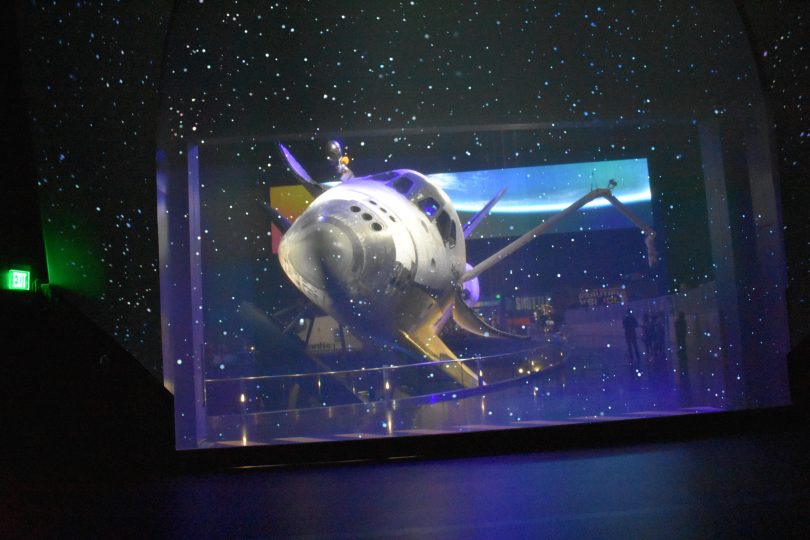 We are huge space junkies here at Utah’s Adventure Family. We love the sky and the stars. Just check out our Constellations tab! So when we traveled to Florida, Kennedy Space Center at Cape Canaveral was on the top of list. We had such an amazing time there. We highly recommend that you take a day off from DisneyWorld and check it out!

We spent an entire day at Cape Canaveral. The first thing we did was visit the retired Space Shuttle Atlantis. The presentation for the shuttle is really incredible. We were gathered in a small theater and sat and watched a short presentation on the shuttle program. Then, in dramatic fashion, the curtain rose up, and Atlantis was suspended in front of us with its cargo doors wide open.

We don’t mind telling you that emotions were close to the surface and there were even a few tears. It’s hard to explain the reason, but as we gazed on this machine that had made 33 missions into space, there was definitely a feeling of awe. We were allowed to walk around and look at the shuttle as well as many other simulations in this area. There is also a launch simulation that is pretty intense. We even crawled through a model of the International Space Station!

Lunch with an Astronaut

The second thing we did was have lunch with an astronaut. This was an extra charge, but we had dinner and Mark Lee, a retired astronaut, spoke to us. He presented a slide show and gave us an insiders view of space travel. What surprised us the most is how silly astronauts are. They were constantly playing practical jokes and taking funny pictures.

We also took a bus tour of the area. Bus tours are included in your admission. We saw huge crawling launch pads, massive rocket silo storage areas, and several retired rockets all from inside the bus. The Kennedy Space Center is located on a National Wildlife Refuge. We were able to see dozens of alligators, turtles, a variety of birds, and even a dolphin. This was an added bonus to our tour. It was so exciting!

The Bus Tour allows you to get out at a few different spots for pictures and the last stop is at the Apollo/Saturn V Center.

Our final stop was to see the Saturn V (five) rocket. It is the largest rocket ever built, and it hangs above you. It is impossible to get a picture, but you can walk its length and see just how big it is. This building also houses items from the Apollo missions. There is a lunar lander, a moon rock that you can touch, and many other informative displays. This building is reached by taking the bus.

We liked DisneyWorld a lot, but Kennedy Space Center is not to be missed! This is something our boys still talk about, and they want to go back.