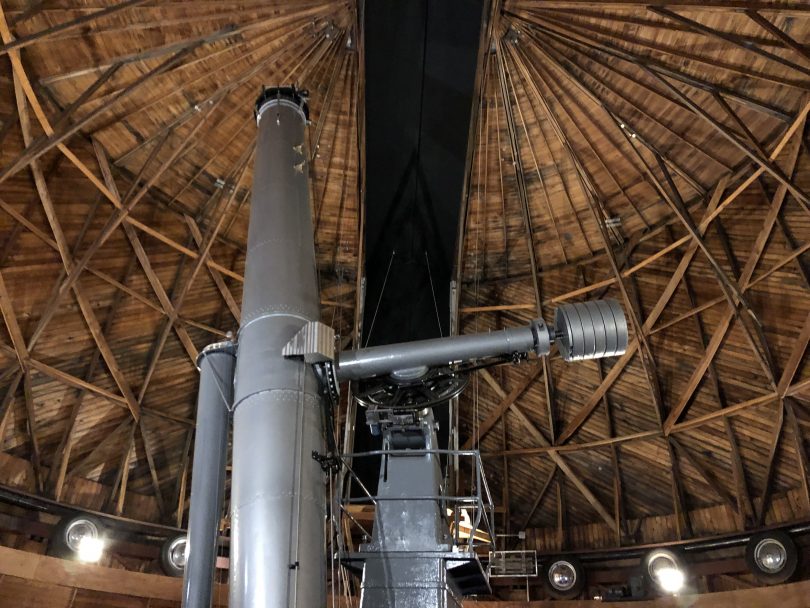 Lowell Observatory in Flagstaff, Arizona, is famous for being the place where Pluto was discovered. They have programs that run throughout the day and stargazing with large telescopes at night. If you’re in the Flagstaff area, this is the best way to spend a half day.

At Utah’s Adventure Family, we are definitely into stars, constellations, and events in the sky. We’ve visited the Clark Planetarium in Salt Lake as well as the BYU Planetarium in Provo. But the Lowell Planetarium really stands out as a favorite. This is partly because of its location in Flagstaff. Flagstaff is the world’s first city to receive a Dark Sky designation. This means that all the lighting must point downward and be of certainly wavelengths that don’t interfere with stargazing. From the hill of the observatory, it was amazing to see how dark the city was, despite the 72,000 people living there.

Lowell Observatory allows visitors to go to programs led by undergrad students that discuss astronomy in depth. We watched three presentations: Fun science, which was great for the kids; Defining Pluto, which went through the discovery of Pluto and its being reclassified as a dwarf planet; and the Cosmos, which talked about galaxies and the creation of the universe. Each time we were impressed at how well prepared these presenters were. They really knew their stuff, answering questions and giving the information in a way that was accessible to everyone.

Our favorite thing at the Lowell Observatory was the Pluto walk. It is a walk through the solar system to scale. Two or three steps take you past the signs for Mercury, Venus, and Earth. Each sign gives information like size, rotation and orbit time, and mythology associated with the planet. You pass Jupiter and Saturn after a few more steps. The last three planets are much farther out, and Pluto is about 75 yards away!

Our boys participated in the Junior Astronomer Program at Lowell Observatory. It costs $3, but you get crayons, a pencil, and a booklet to work through. Once you compete the booklet, you earn a nice patch. We learned a lot from this program and recommend it for anyone visiting.

Make sure to spend a half day at Lowell Observatory if you’re in northern Arizona. It was a highlight of our trip.