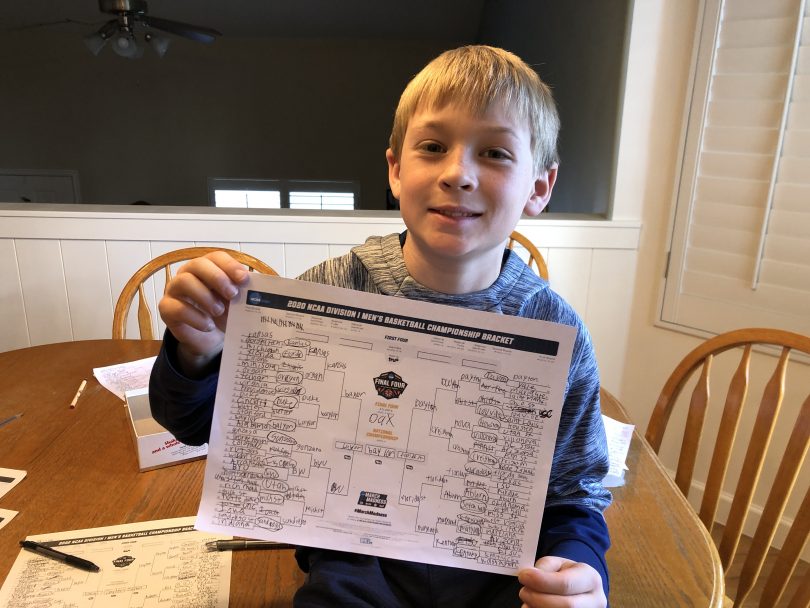 Our family was really missing the NCAA Tournament this year. We are so used to filling out brackets, keeping track of scores, and rooting for our teams. We decided that even though the games had to be cancelled due to the current health pandemic, we could still have some fun with it. You can, too! Here’s how:

First, printed out a blank bracket. We were able to do this at the NCAA site. Then we used CBS Sports list of College Basketball teams by ranking to find the top 64 teams for our bracket. We went through and assigned the teams to each seed. Teams 1-4 get a 1 seed, teams, 5-8 get a two seed, etc. This only took us about 20 minutes. Finally, we made multiple copies of our bracket (we can’t do this for you due to copyright reasons).

Once we had a bracket, we each made our picks and decided on our own scoring rules. Here’s how we did it. We rolled four dice for each team and added the total. Then we added the difference between the seeds to the high seed’s total. That means that a one seed gets 15 points added to the roll of their dice when they play a 16 seed. This made it pretty hard to get an upset, but that’s the way it is supposed to be.

For personal scoring, we gave 1 point for each correct game, and two points if we correctly called an upset (there is no upset in the 8-9 game or any games that are one point difference in seeding). We did a round each day and tallied our total points after each round.

On the first day we did Round 1. There were a few upsets, but mostly the high seeds moved on because of their point advantage. We took turns rolling for our picks, and the boys enjoyed adding their scores and cheering on their teams.

The second round was a lot more fun. There were a few more upsets because the seeds were closer, and of course, all points were doubled for Round 2. This meant 2 points per game and 4 points for upsets (the 4-5 game is not an upset)

In case of a tie game, we went into overtime. We rolled one die per team and the highest die won. This was every intense and made it feel much like the NCAA tournament. This didn’t happen very often, but it was extra fun when it did.

As the Tournament continued, the points doubled each round. There were fewer upsets, but it was way more intense when a one seed played a one seed and there was no advantage. It wasn’t as exciting as the real thing, but under the circumstances, it was a great way to spend 30-60 minutes as a family each day.

We played a different round each day to help the fun last a little bit longer. It helped us spend some good time as a family, and it helped us talk about some of our favorite moments from past NCAA tournaments. Now our boys are making a new bracket, so we can do it again. They even threw the Utes in as a 6 seed. This might keep us entertained through the entire pandemic.

Feel free to share this post or add comments as to how you have improved our tournament!