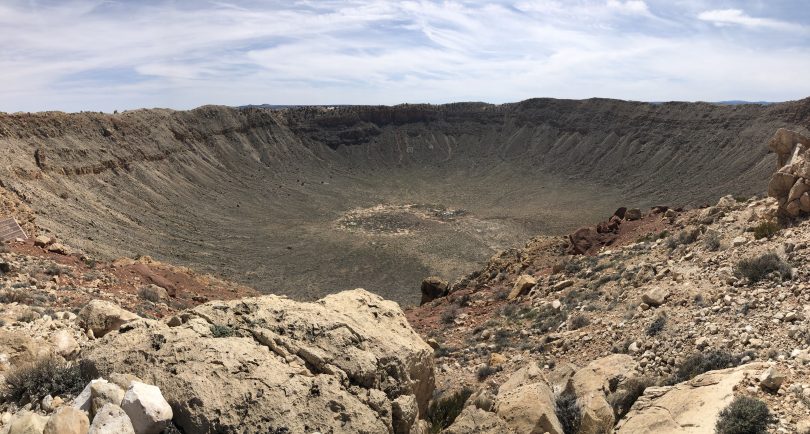 Fifty thousand years ago a large meteor struck Arizona in the middle of the desert. Some folks in our tour group asked if this was the meteor that killed the dinosaurs, but that was 65 million years ago, a big difference from 50,000 years ago. This meteor, which was around 150 feet long, did make a massive crater and flattened everything with sixty-five miles.

You can visit Meteor Crater on I-40 east of Flagstaff. The crater is family-owned and operated, and they’ve done a nice job with the presentation. Though it is a bit expensive, the cost is well worth this unique site that has no parallel anywhere in the US.

There is a large Visitor Center on the rim of the crater. The first thing you come to inside is the largest known fragment of the meteor. It is only about a meter across (we saw a second slightly smaller shard at Lowell Planetarium in Flagstaff). Every half hour a movie is played in the theater. This 20 minute movie explains what scientists know and what theories they have about the meteor and the resultant crater.

Immediately after the movie, we took a guided rim tour. They have tours every hours and a “ranger” leads you along the paved path for about a half mile. These tours are included in the cost of your ticket, but since they are only every hour, make sure to plan your visit in include a tour.

The rangers points out interesting items like the crashed airplane in the crater, the American flag, and an old residence right on the rim. We learned some pretty amazing facts, like that if the crater were a stadium, 2 million fans could watch 20 football games played on the floor of the crater simultaneously. The crater is really that big!

If you’re not up for the hike, there are overlooks and viewpoints along the opposite rim. A separate trail leads to platforms that view the nearly round crater from different angles.

Back inside the Visitor Center there is also a museum. It walks you through a history of meteor strikes and gives information about the destructive potential of this phenomenon. We also learned the difference between meteors, meteorites, meteoroids, and other objects in the sky. We spent nearly an hour in the museum.

With the movie and the rim tour, plan on at least three hours at Meteor Crater. It’s a really interesting three hours, too! We were impressed with Meteor Crater. If you are looking for other adventures near Flagstaff, check out our complete list.