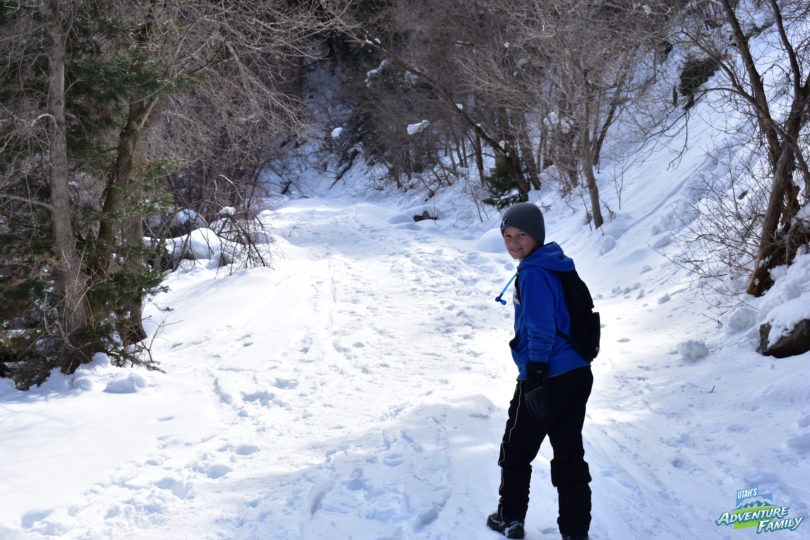 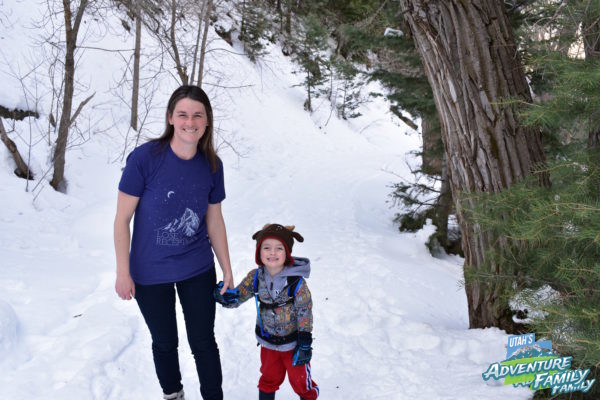 We had a lot of fun hiking the Mill B South Trail.

We decided to try some nice short hikes this weekend! It was nearly 60 degrees, and we didn’t want to waste an opportunity to add to our list for the 52 Hike Challenge. We drove to our favorite place, Big Cottonwood Canyon, and parked on the S curve. Then we trekked up the short, but steep hike called Mill B South Trail. This hike only runs about a half mile, and we got passed by a lot of serious hikers heading up the Lake Blanche Trail, which branches off to the right, but we really enjoyed ourselves.

The Mill B South Trail has trailhead restrooms, but they were locked at this point in the season. There was still more than a foot of snow on the roof even in March. The trail is paved (not that you could see the pavement under the snow), but it is also consistently steep as you climb up to the small waterfall at the end of the route. The snow was heavy and well-packed along the trail. As we hiked, we saw a lot of rolled up snow balls to the left side of the trail. Our boys kept calling them cinnamon rolls, but it was actually where the snow had rolled down the steep hill into little spirals. Soon they were up the hill rolling snowballs down at each other. The littlest one really liked to get plowed over by the growing snowballs! 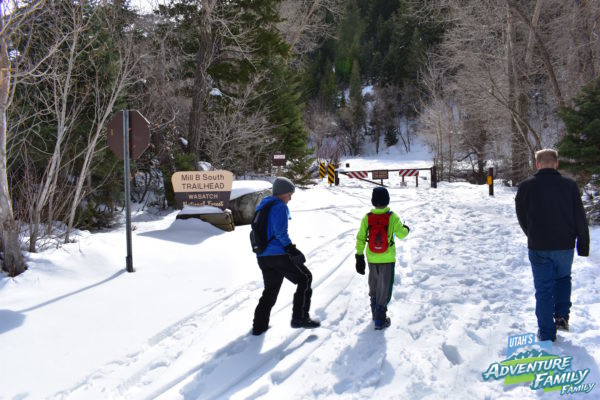 Park on the S curve and begin your hike at the Mill B South Trailhead sign. 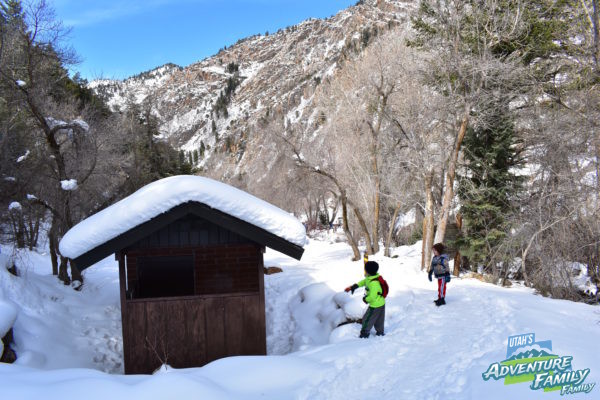 The first thing you’ll pass are the bathrooms, and our boys were amazed at the amount of snow on the roof! 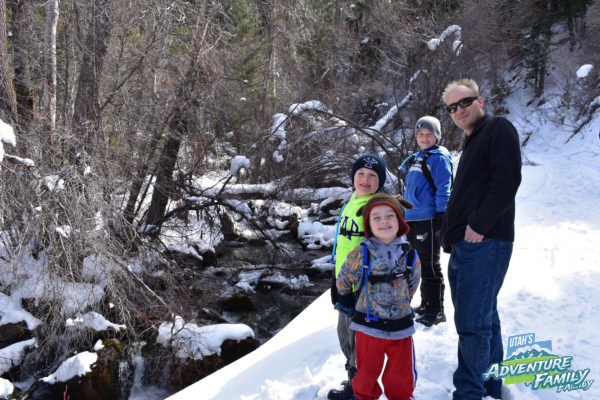 One of the reasons this trail is beautiful is because it follows the river the entire way. 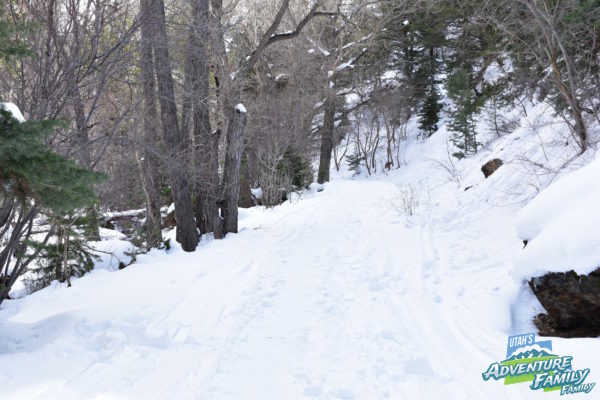 The trail is wide and easy to follow. It was well packed when we were there, too. 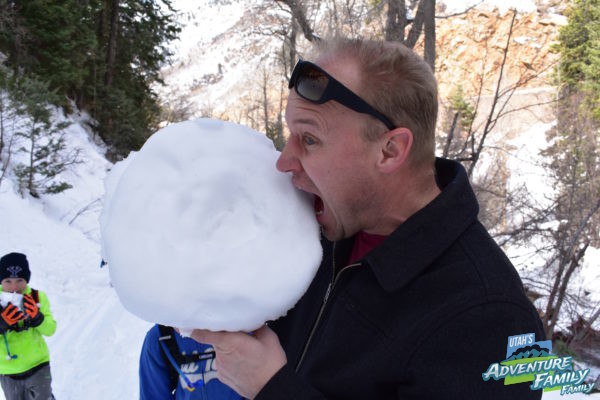 This is one of the “cinnamon rolls” we spotted on the trail, so keep your eye out for the rolling snow. 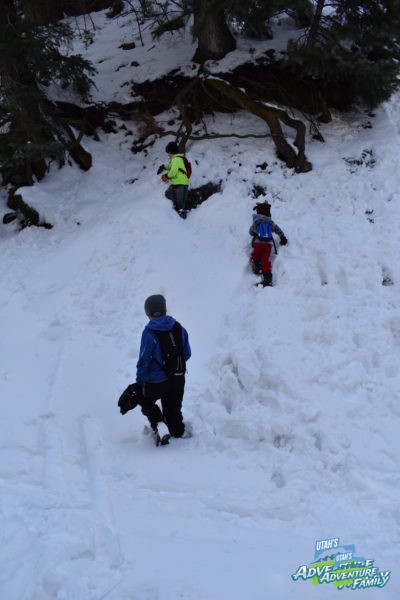 Our boys love exploring in the snow. Mom likes to stay on the packed trail where she is dry.

At the end of the trail is a tiny waterfall, that is really more of a stream that goes under a bridge than a waterfall, but our boys think it is a waterfall, and they like hikes with beautiful endings. The waterfall was partially hidden behind ice (like Lisa Falls), so it was neat to watch it flow. We spent a few minutes enjoying the beauty of the canyon before we turned around and headed back down the trail. 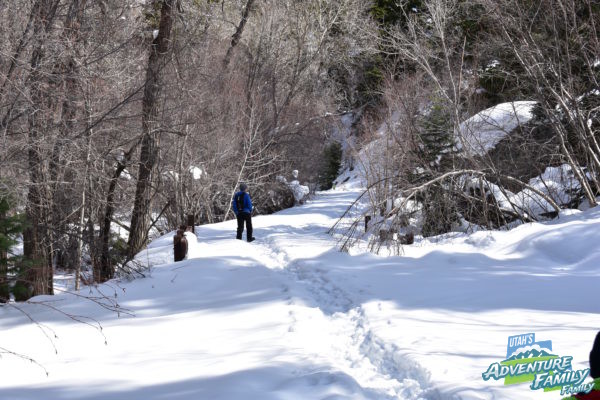 You will see a sign for the Lake Blanche Trail, but don’t go that way. Go straight, and then there is just a short walk to the waterfall. 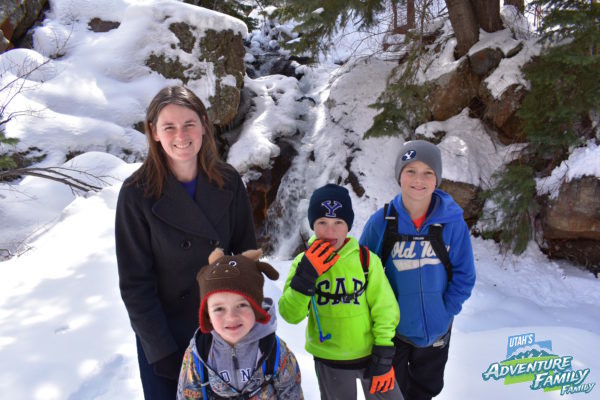 We love hiking to waterfalls all year! 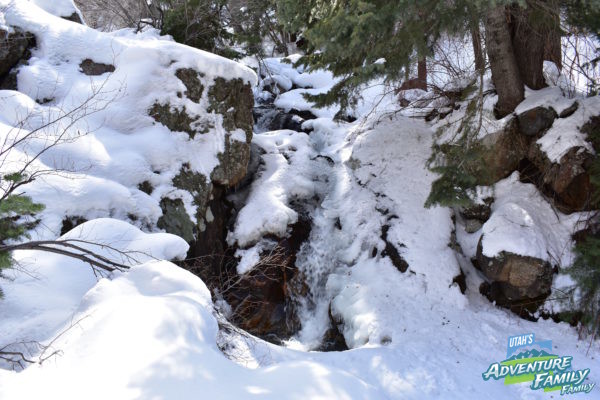 The waterfall is beautiful even hidden behind snow and ice. 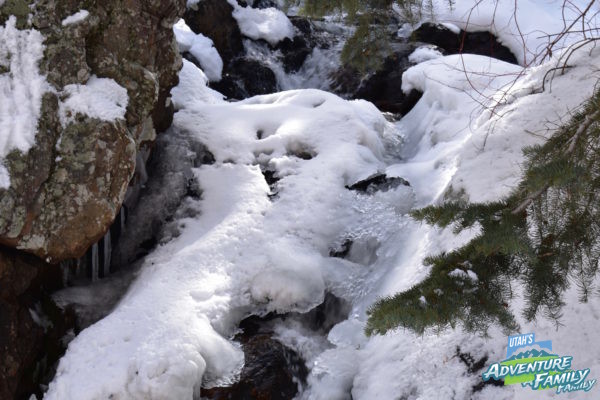 We loved how the water gushed behind the ice.

Going down was very easy as it is all downhill. This hike only took us about 45 minutes with lots of stops along the way. To call it a mile roundtrip is probably pushing it, but we really enjoyed our hike on the Mill B South Trail in winter. This trail also pairs really well with Hidden Falls located just across the street. The little parking lot is closed off by Mill B South, and the lot for Hidden Falls wasn’t plowed, so you will need to park roadside at the Big S curve in Big Cottonwood Canyon. 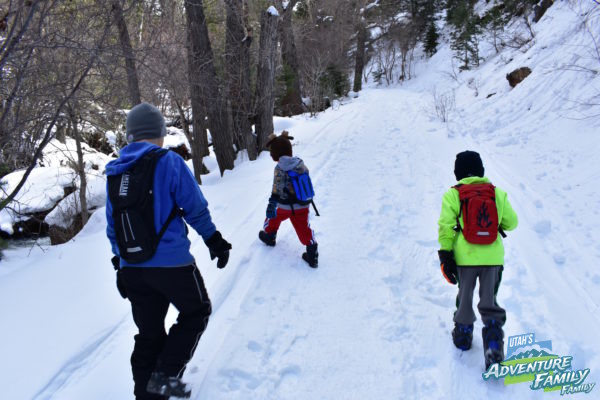 These three have become really great winter hikers. They like to walk in the deep snow instead of staying on the packed portion of the trail no matter what Mom and Dad say. 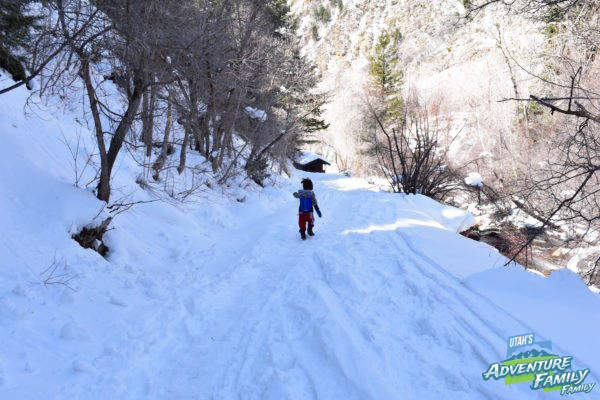 Going downhill was easy and quick!