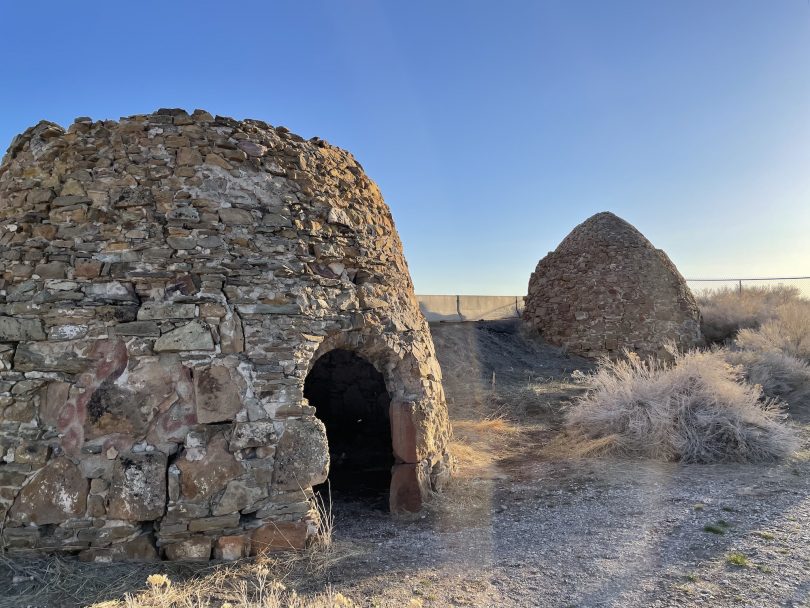 Just east of Leamington, Utah, in Millard County, there is a roadside stop to see some large pioneer era ovens. Actually, according to the sign, these ovens were built much later, but the west was still a rugged place when they were constructed in the early 1880s. If you’ve been through this area of the state, you may have passed the Morrison Charcoal Ovens. They look like two large beehives on the north side of the road. Surprisingly, these ovens weren’t in use for very long, and their only purpose was making charcoal.

No one really knows how long the charcoal ovens were used. The community decided to preserve and rebuilt the ovens as part of history. Now they are a quick stop along the road out to Great Basin National Park.

You can easily stop and check out the Morrison Charcoal Ovens. There is a small parking area that will fit three or four cars, but we’ve never seen anyone there. We stopped and walked around the ovens. You can even go inside the ovens, but make sure not to mark or mar the ovens so that others can enjoy them. They are made entirely out of stone and are about 20 feet high. You can still see the windows and doors where the wood was pushed inside.

The Morrison Charcoal Ovens aren’t a fantastic stop, but they are a great place to get out and stretch your legs on a ride out Highway 132. Use our post of Things to do Near Delta for other ideas in the Millard County area.