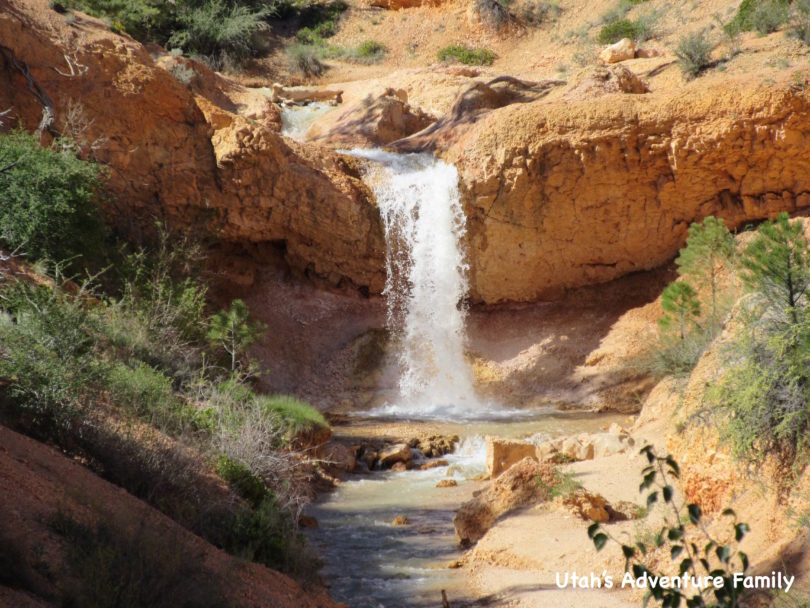 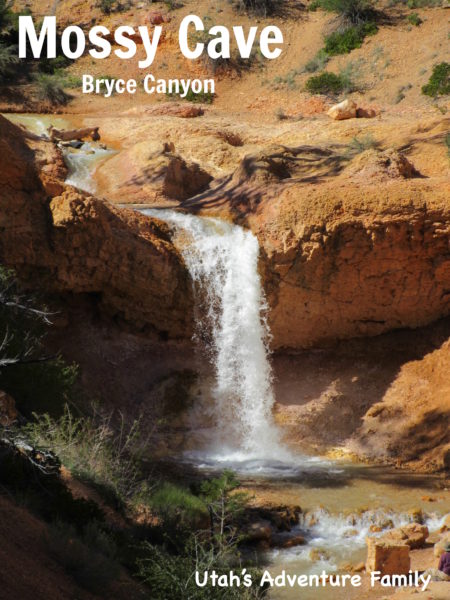 The trailhead for Mossy Cave is located outside of Bryce Canyon National Park, though this trail is part of the park and maintained by the Park Service. The trail is very short, andthere are two great payoffs along the way, a waterfall, and Mossy Cave.

Mossy Cave isn’t actually a cave at all, it is a grotto that is constantly wet and dripping, even forming ice in the winter months. The waterfall isn’t really a natural waterfall, either. It was created by the Pioneers when they dug a 10 mile canal to bring water to Bryce Valley. Both are still impressive.

The trail has a wide pullout between mile marker 17 and 18 on the road between Bryce Canyon NP and Tropic. There are trailhead restrooms and a small brown sign, and the trail itself is very well marked and easy to follow, but there is a lot of traffic and you won’t get much peace on the trail! 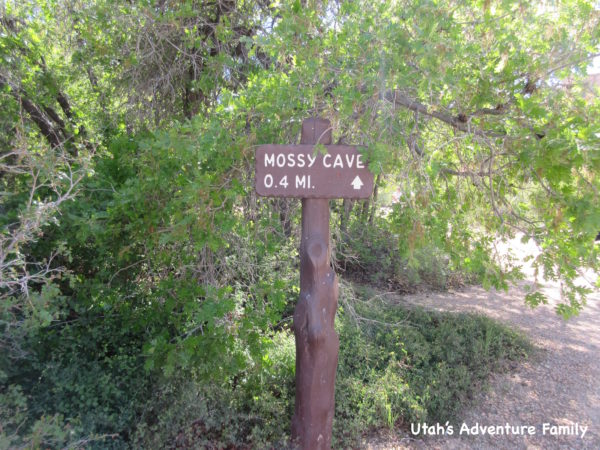 Watch for this small sign by the parking lot. 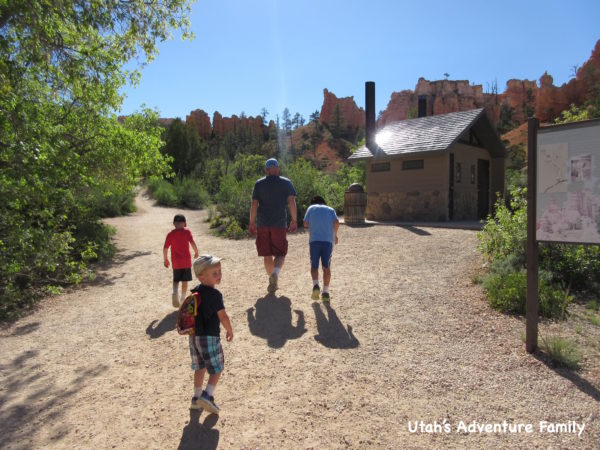 There are pit toilets by the trailhead.

The trail is out and back and runs less than a mile roundtrip (the sign says 0.4 miles to the cave, so 0.8 roundtrip). It is consistently uphill to the waterfall and grotto, but rarely steep, and our 3 year-old made the hike without any help. The only real incline is when you walk a few steps up to the cave. The trail follows the stream to a few bridges and eventually, the waterfall, which is about a 25 foot cascade appears on your right. There is a bridge that overlooks the falls nicely from about 100 yards, but some people have made their own trail to the base of the falls. We stayed on the trail until it forks. The right takes you to the top of the falls (this trail was closed when we were there) and the left takes you around to the grotto, Mossy Cave. This area is cool and shady and we say a Western Tanager flitting about the trees. 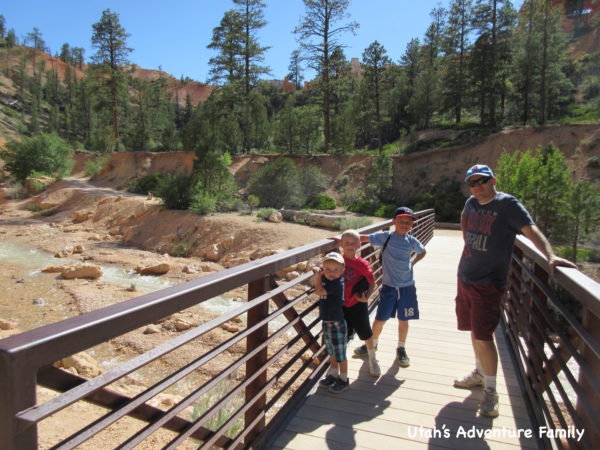 You will cross this first bridge shortly after beginning the trail. 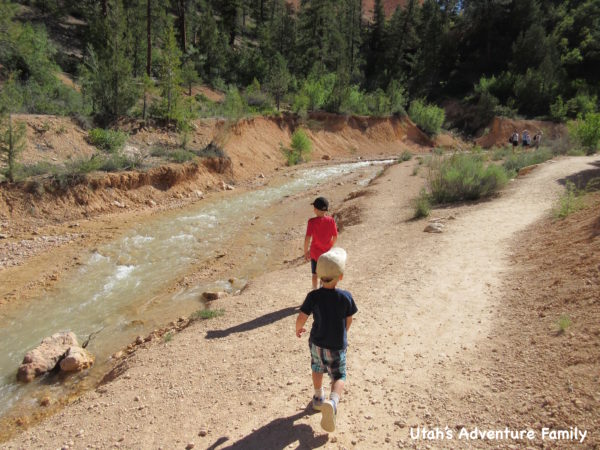 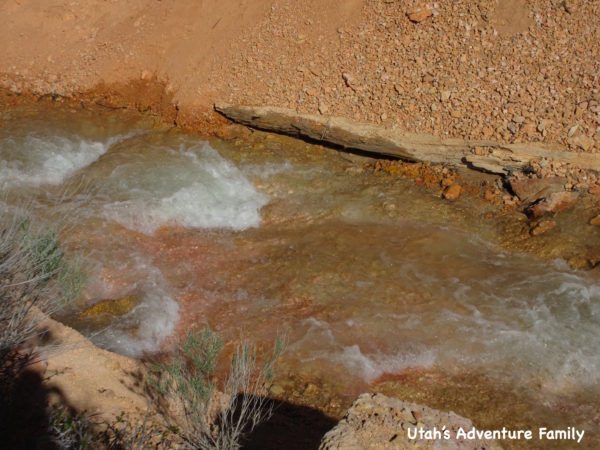 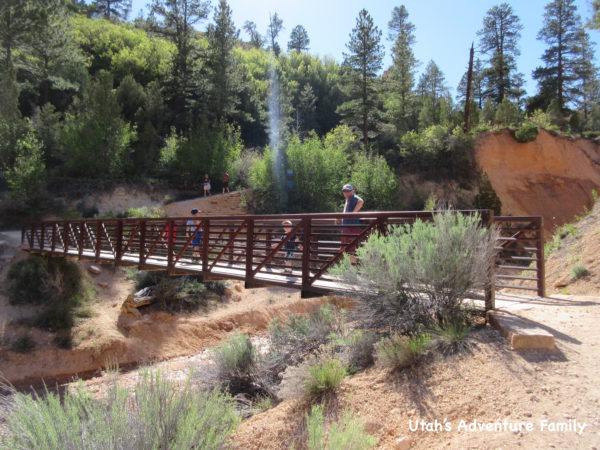 You will see the waterfall as soon as you arrive at the 2nd bridge. 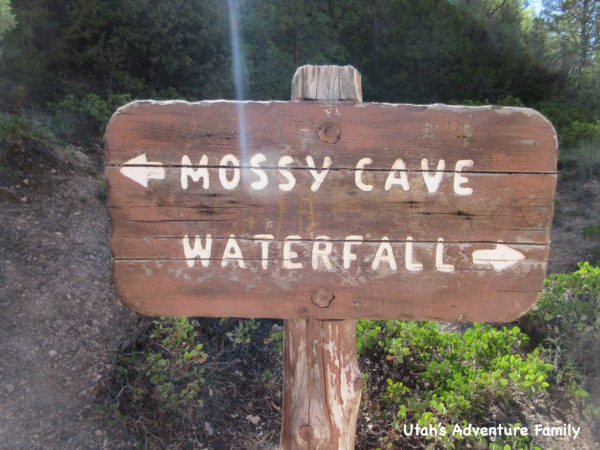 You can choose which way to go first. We went to the cave, and then walked a little bit toward the waterfall before hitting the closed trail sign. 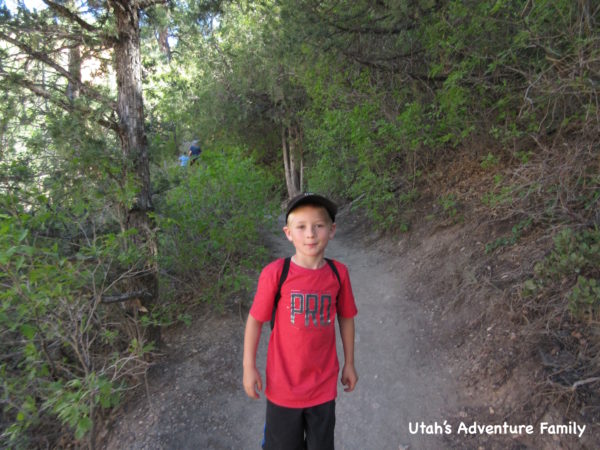 The trail back to the cave is shady. 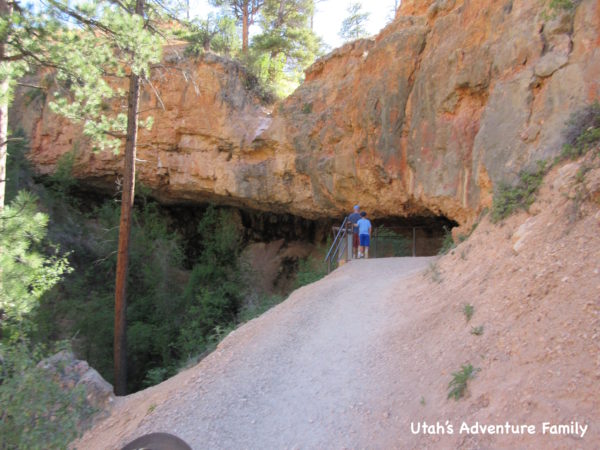 This is the only real climb in the trail…not much. 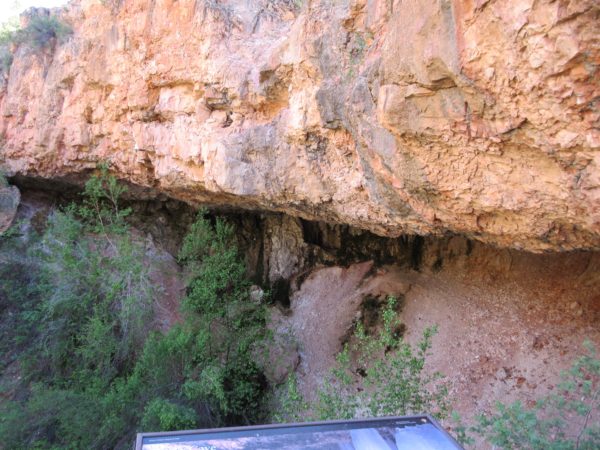 This is Mossy Cave. We were hoping to see ice, but it has been too hot.

Mossy Cave Trail is an easy Bryce Canyon hike. It is appropriate for pretty much everyone though you could not do wheels on this trail. There is also a Hike the Hoodoo challenge marker where the trail splits. Take a photo or do a rubbing (see Hike the Hoodoo Challenge on our Bryce Canyon National Park entry) to receive a reward at the Visitor’s Center! 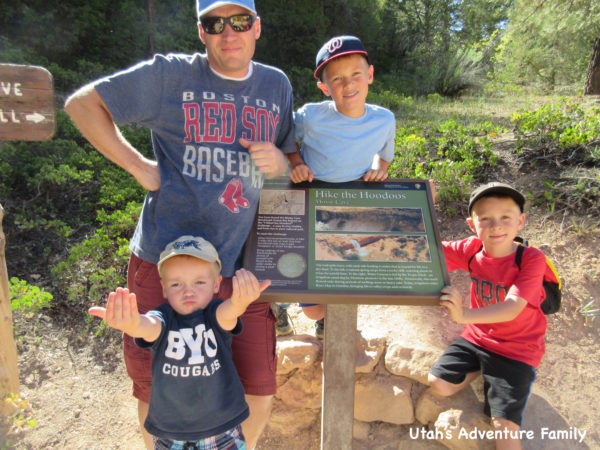 The Hike the Hoodoo activity was a lot of fun for our family. 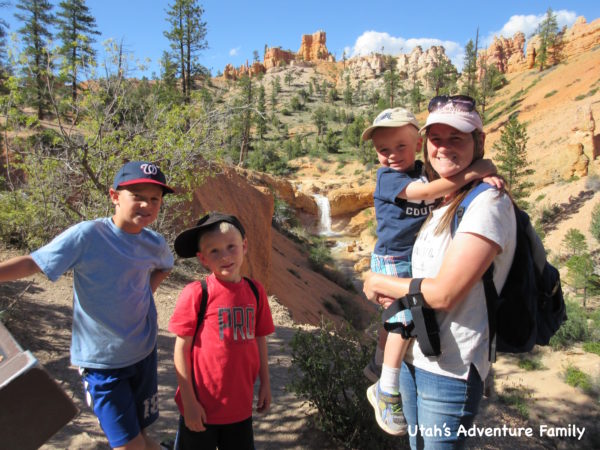 Some people hiked down to the waterfall from the bridge, and others went past the “trail closed” sign to the top. We stayed on the trail and still enjoyed the beautiful waterfall! 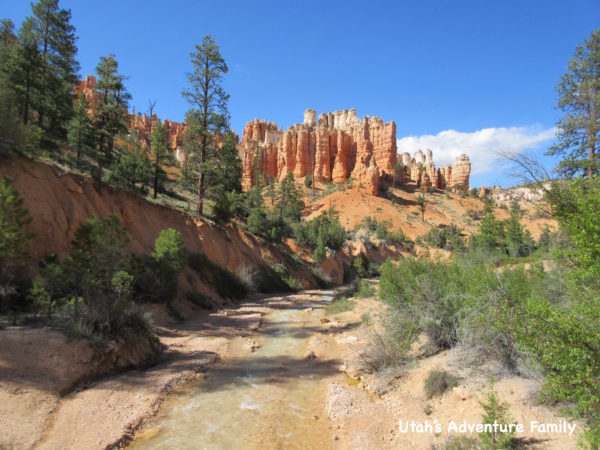 The hike is beautiful! Walking by the river near the Hoodoos is amazing.

Because this trail lies outside of the fee area for Bryce Canyon, it is FREE. You can stop along Highway 12 between mile markers 17 and 18 between Tropic and Bryce City and do this hike even if you are not visiting Bryce Canyon.