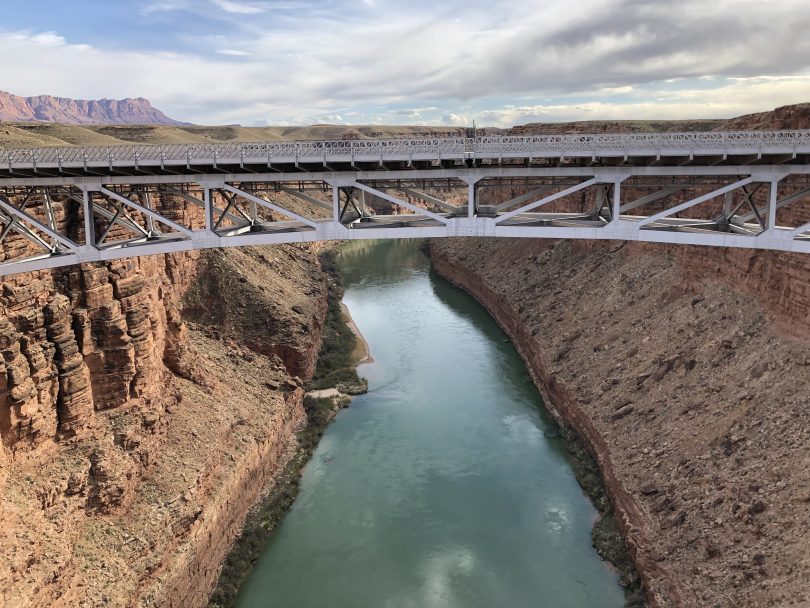 Navajo Bridge is located on Highway 89A just south of the Utah border. There are actually two bridges, one for foot traffic and one for vehicle traffic. There is a small giftshop and Visitor Center located next to the bridges, and best of all, there is a good chance of seeing California condors, which are critically endangered.

Navajo Bridge (the foot traffic one) was completed in 1929. As the highway and traffic grew, a new bridge was needed, so a second bridge was built in the 1990s. The old bridge became a walking bridge and the new one better handled cars on their way to the North Rim of the Grand Canyon.

It is a wonder just to walk on Navajo Bridge. It is 470 feet high, and the towering red rocks surrounding the Colorado River are especially beautiful. Just make sure to keep both feet on the ground as you peer down at the river below and it is quite safe. There is also an observation point between the bridges.

We were given a tip that California condors can often be seen at Navajo Bridge. This turned out to be true as we arrived at the bridge around dinner time and watched seven beautiful condors come in to roost on the trusses. These amazing birds, fighting their way back from the brink of extinction, have a ten foot wingspan, which is the largest in North America.

In 1987, the US Government captured all 27 remaining condors and bred them in captivity. They were extinct from the wild for four years until 1991, when they were reintroduced. They are still critically endangered with a population of around 500 total birds. Every single condor is tagged and monitored. It was a really treat to see 7 of them at Navajo Bridge!

Navajo Bridge is located on the old US 89. Whether coming from Page or Kanab or the Grand Canyon, leave US 89 and take US 89A (which is the old highway) and follow signs to Navajo Bridge. The Visitor Center is on the west side, although there is parking on both ends of the bridge.

For other adventures near Navajo Bridge, check out Horseshoe Bend or Glen Canyon Dam.