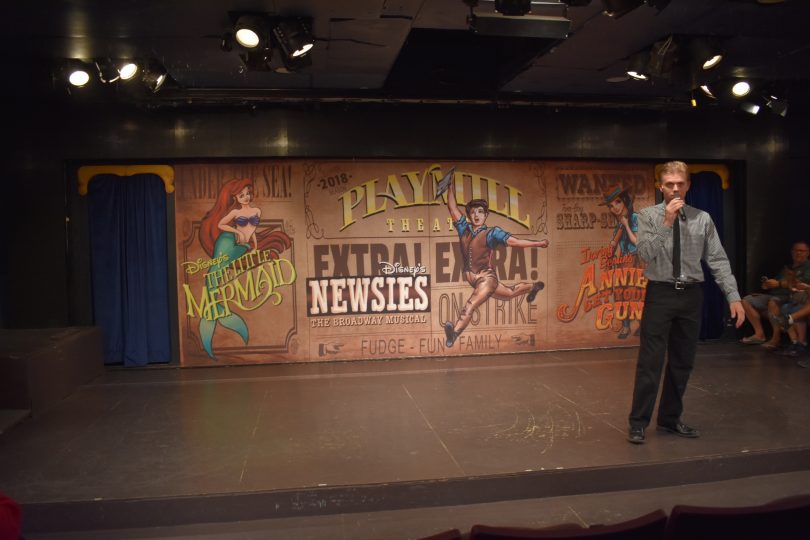 The Playmill Theatre in West Yellowstone has been in operation for over fifty years. They put on three family-friendly shows all summer. The actors come primarily from BYU-Idaho and many of them are from Utah.

The Playmill was opened in 1964, but the current owners bought it in 2006. They have worked hard to maintain a family-friendly environment, so all shows are appropriate for all ages. Best of all, the show we saw was fun, high-energy, and well performed.

One thing that we enjoyed was the close-set theater. There was not a bad seat in the house because the theater is small, much like the Hale Center Theater in Orem. The stage is long and narrow and there are seats on three sides, which makes everyone feel like they have a front row seat.

One of the best and most unique features of the Playmill is the variety show before the production starts. Be early, because as you wait for the show, the performers sing pop songs, dance, and tell jokes. It reminded us a little of the old Hee-Haw TV show, if you’ve seen that.

The players come out at intermission, too. They sell waterbottles, fudge sundaes, popcorn, and homemade fudge from center stage. It was fun to interact with the cast as they sold delicious treats.

The show was performed beautifully. We saw Annie Get Your Gun in 2018 and both the singing and the acting were great. They even had three young boys in the production, and we were surprised that they were very good actors, which can be difficult to find.

We loved the Playmill and plan to make it a part of our vacation every time we go to Yellowstone. The ticket price makes this adventure a bit of splurge, but it is definitely worth the cost for an evening of laughter, love, and family. You won’t forget it!