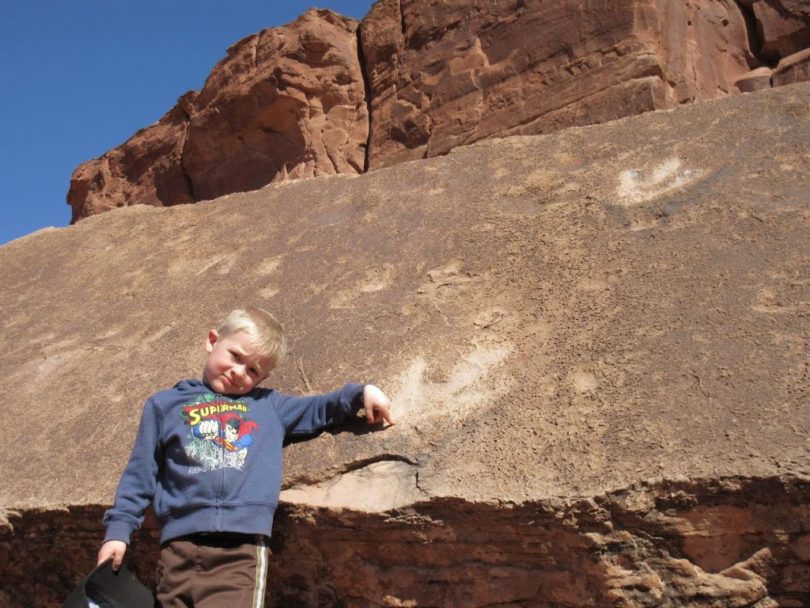 Poison Spider dinosaur trackway has some of the best dinosaur tracks we’ve ever seen. As a bonus, there are beautiful, mostly undisturbed petroglyphs along the route there.

As you approach Moab from the north, you’ll find a road that goes out to Potash just outside of town (Scenic Byway 279). This road follows the Colorado River on the opposite side from the Kane Creek petroglyphs. We drove down the road exactly 5 miles to a sign that says Indian Writing. There is a wide pullout next to the river on the left, and the petroglyphs are on the right. We looked up and saw them immediately about 25 feet up the wall. We did have to point them out to a lot of people, though, so maybe they’re not as obvious as we thought. There are tons of petroglyphs here and the panel extends all the way down around the corner to about 150 feet. This rock art was created between 1 AD and about 1300 AD by the Fremont or Anasazi people who frequented this region. An interpretive sign here says to look for a bear, but we actually found it farther down the road.

A couple hundred yards down the road there is another sign. We found the bear here, and he is impressive. There is not too much else on this panel, though. He is worth the stop.

The dinosaur trackway is a little farther down the road. On the right is a steep pullout with restrooms, ample parking, and a map showing you the tracks. I know it seems crazy to think you can see them through binoculars, but you can. A large rock stands up on the canyon rim facing the parking lot. The dinosaur tracks run up it. There are two very clear tracks and many other small tracks. A steep primitive hike allows you to get up close to the tracks. We had to scramble a bit, and Mom and the baby stayed in the car, but the boys aged 4 and 7 made the trip. We visited other dinosaur trackways in Red Fleet State Park and Copper Ridge, all of which were amazing to our dino-loving boys, but the Poison Spider Trackway is the most clear.

If you’re in Moab, check it out!