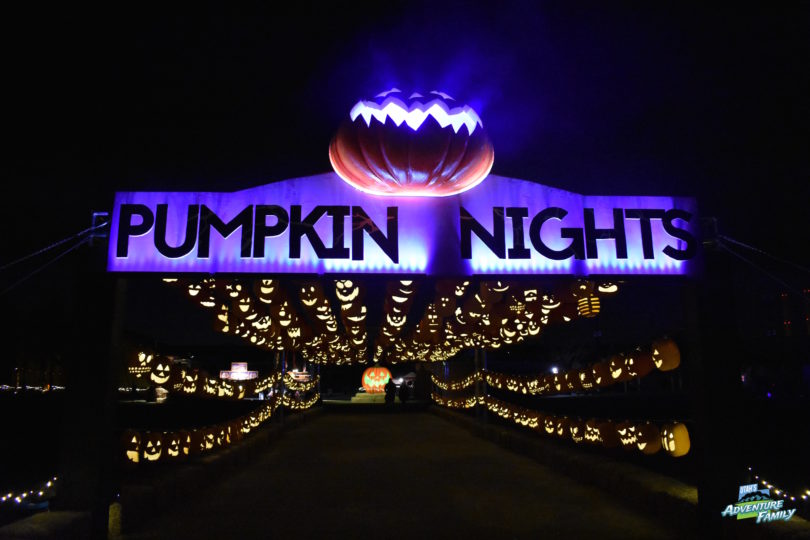 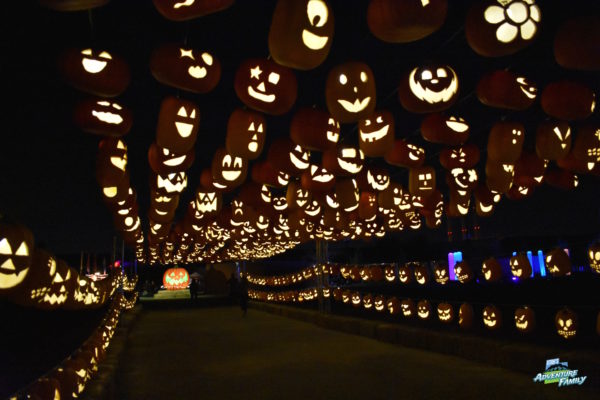 We were able to take a sneak peak at Pumpkin Nights, a new Halloween adventure, here in Salt Lake City.

The entrance to Pumpkin Nights is fun all on its own. You walk down a lit path, with pumpkins hanging in the trees to the side. After passing countless Jack O’Lanterns, you come to the Pumpkin Night sign. Further down the path, hundreds of carved pumpkins are hanging over your head. It was so fun checking out all the faces. 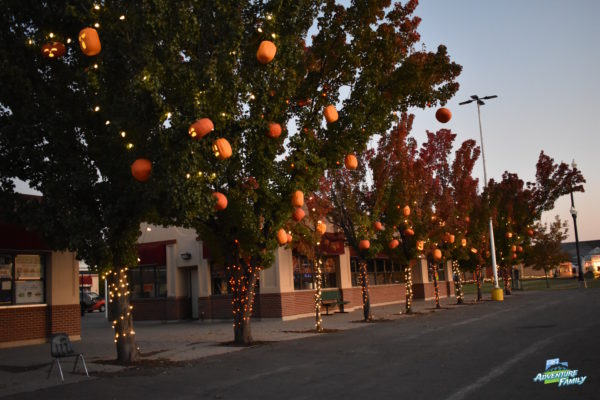 We thought the pumpkins hanging in the tree were so cool. 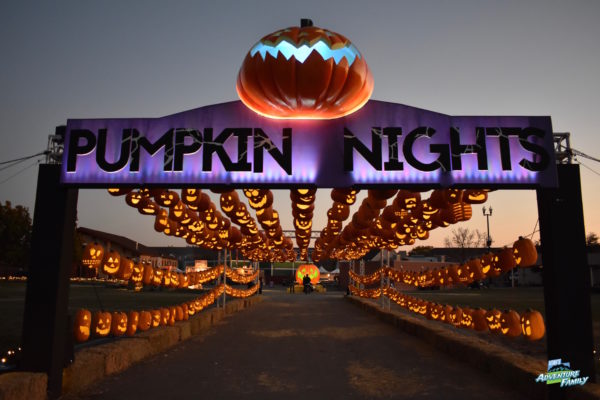 The entrance gets everyone so excited because it is so beautiful!

Right near the entrance are a lot of fun activities. A man was carving a huge pumpkin. We didn’t see the completed project, but it was fun to watch him working on such a large pumpkin. There are food trucks. You could watch a movie (it was Harry Potter when we were there), and you can sit on hay bales underneath the lights and watch. There are some lawn games like croquet and bocce. Our favorite activity was glow in the dark archery. We shot arrows at a target that was launched in the air, like skeet shooting. The man running this station was very helpful and kind with our boys, and we had fun trying to hit the target, although none of us did. 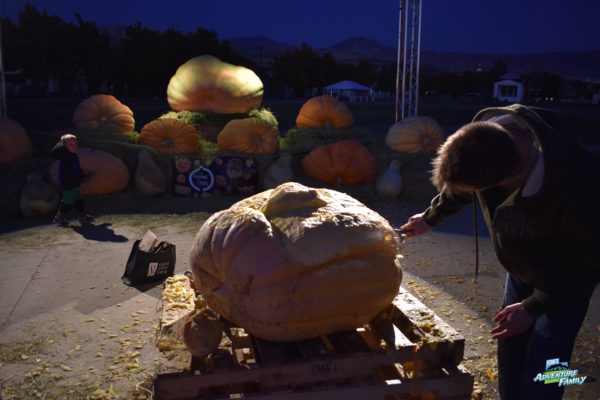 They will carve one of those big pumpkins every night. 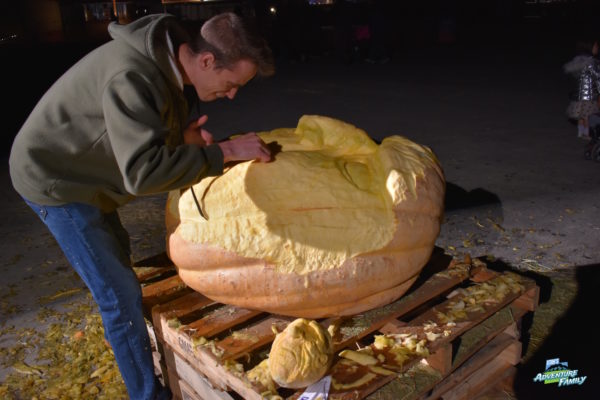 This was what the pumpkin looked like an hour and a half later. 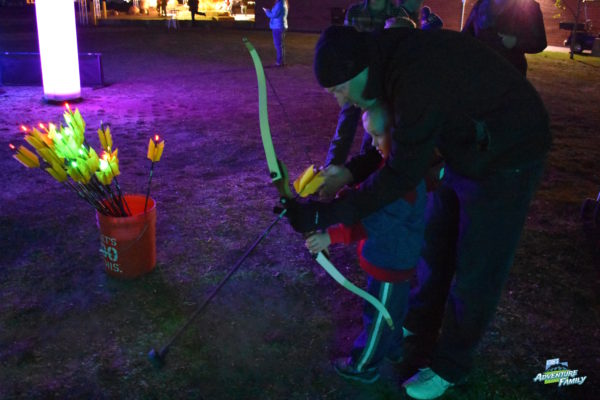 We loved the glow in the dark archery. It was great for all ages. 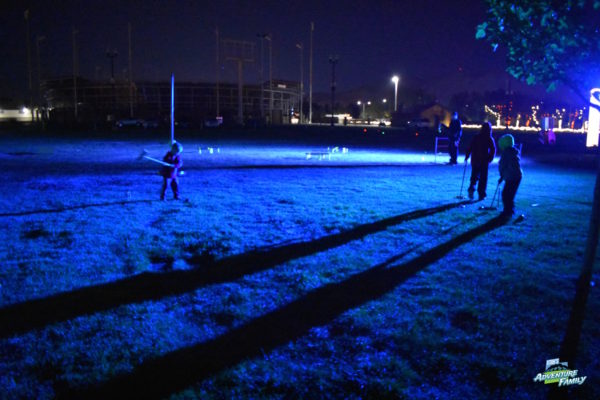 There were lawn games perfect for little boys who think playing in the dark is amazing!

Pumpkin Nights has a half mile walk through different themed areas filled with carved pumpkins. In one spot, there is a dragon hanging over a pond with an amazing reflection. There is a whole Dia De Los Muertoes area with more hanging pumpkins. Our favorite was the Under the Sea section. The pumpkins were lit with different colors. It was so beautiful. There was also a garden area with animals and flowers. It was amazing to see what they could make out of pumpkins. 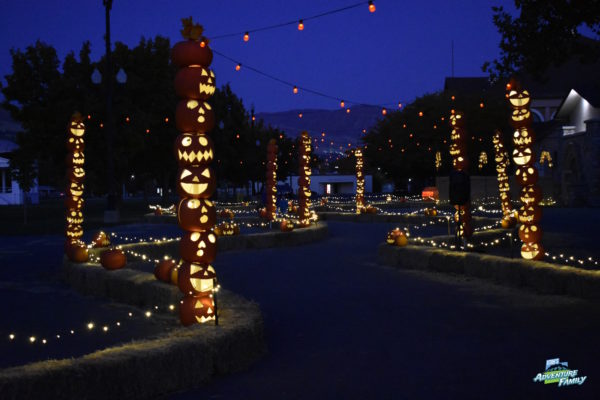 This is the beginning of the Pumpkin Walk. 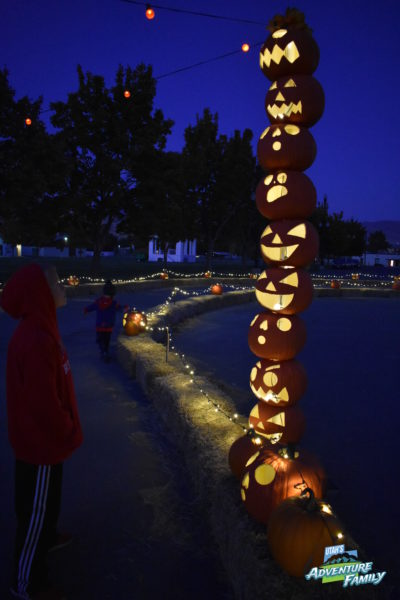 We enjoyed picking our favorite pumpkins in each tower. 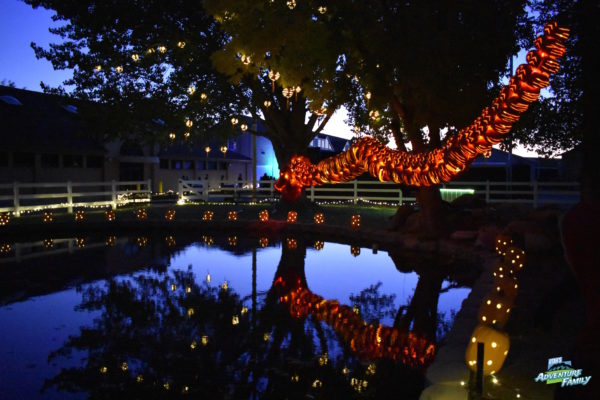 This dragon over the water was spectacular. Can you believe it is made out of pumpkins!! 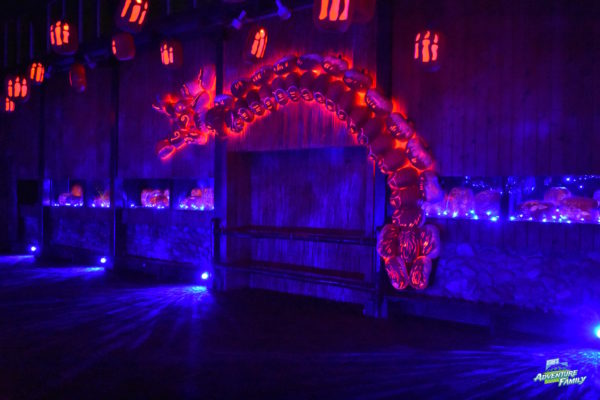 There is another dragon inside. This room is meant to look like an aquarium with fish carved into the pumpkins behind the glass. 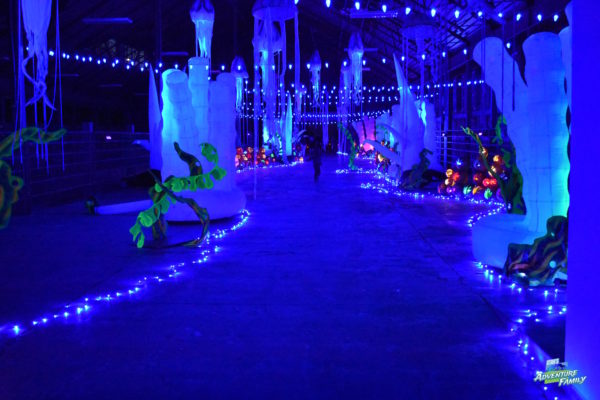 We loved the Under the Sea room. 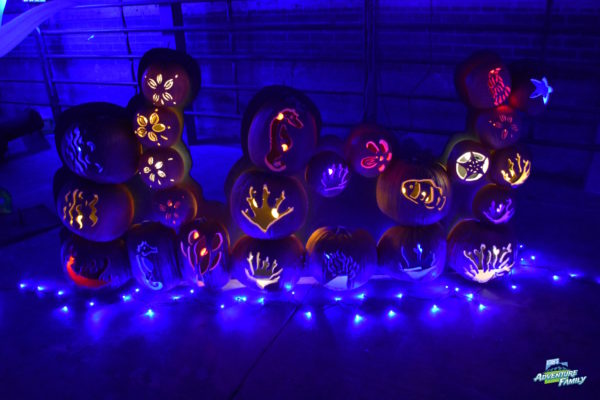 The colors in all the fish were so fun. 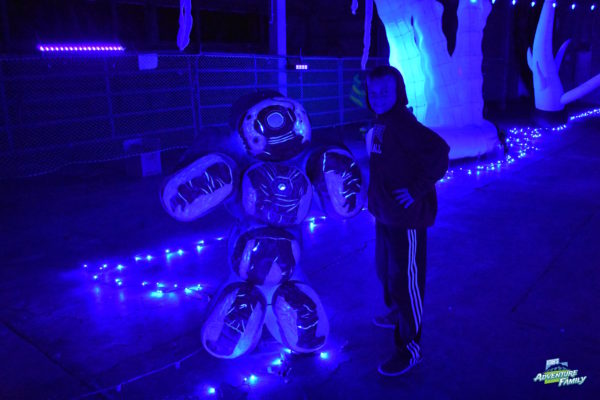 And these pumpkins were built to be like a scuba diver. 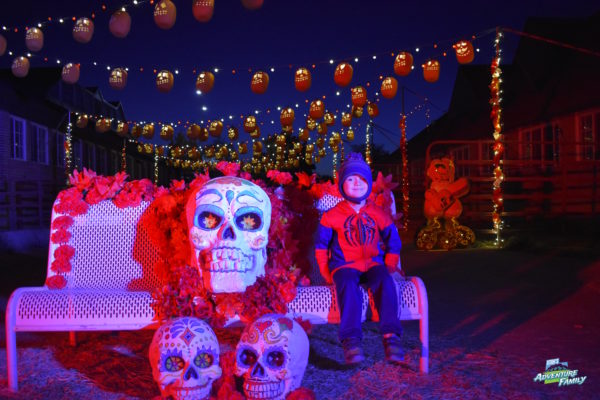 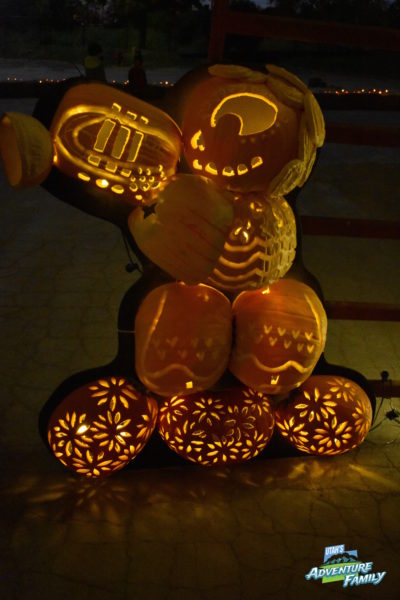 This little trumpet player is awesome! 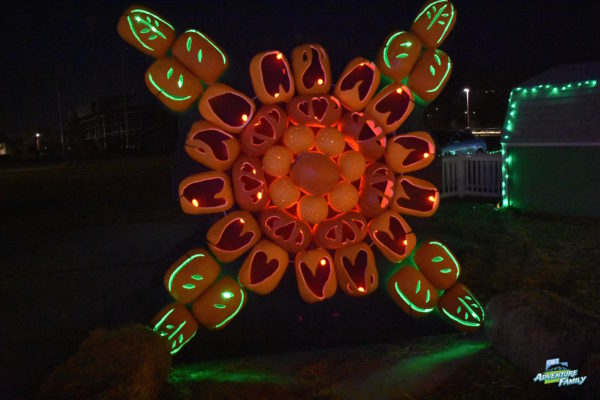 There were huge sunflowers in the garden area.

As you walk through the path, there is music playing and the atmosphere is a ton of fun. There is something to see the entire walk. Even if there are no pumpkins, there are corn mazes, a graveyard, spider webs, and more. The best spot along the way was “The Big Dig.” Here the kids could dig in a huge sand pit for mini pumpkins. Our boys thought this was so much fun. They also loved the strider racing track even though some of them were a little big for the bikes! 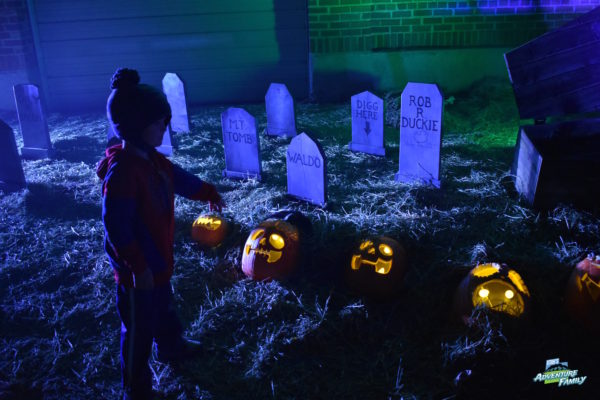 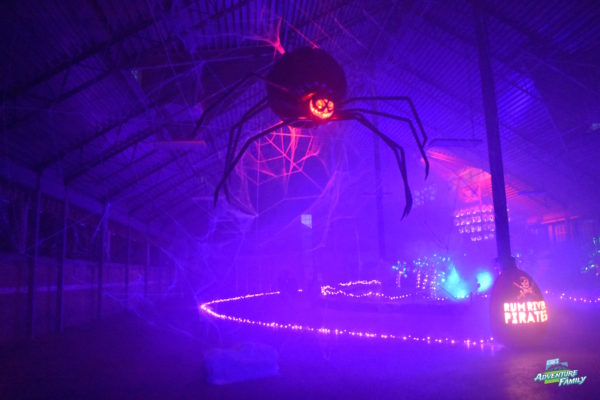 This huge spider greets you after you walk through a tunnel of spider webs. 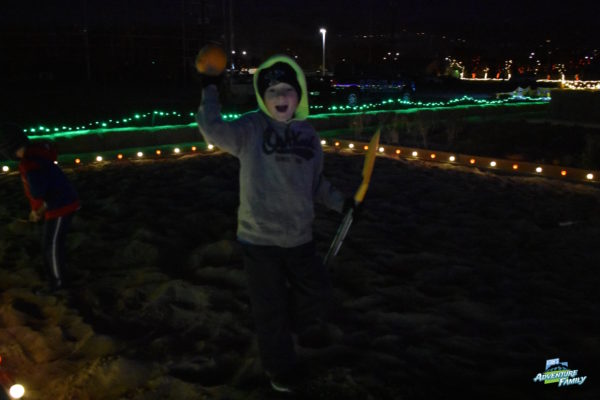 He found a pumpkin. Digging for pumpkins was the highlight of the night. 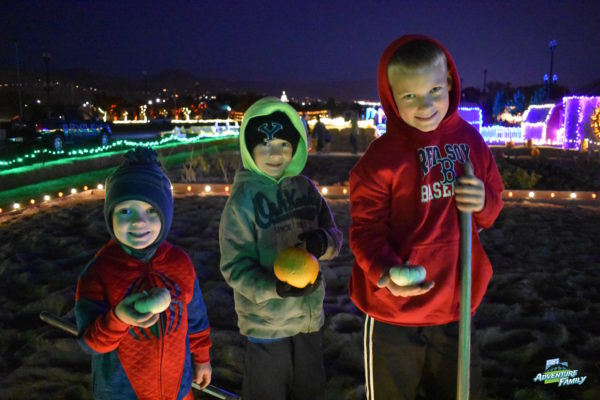 They were so excited. They dug a whole bunch and then reburied them since we only took one. 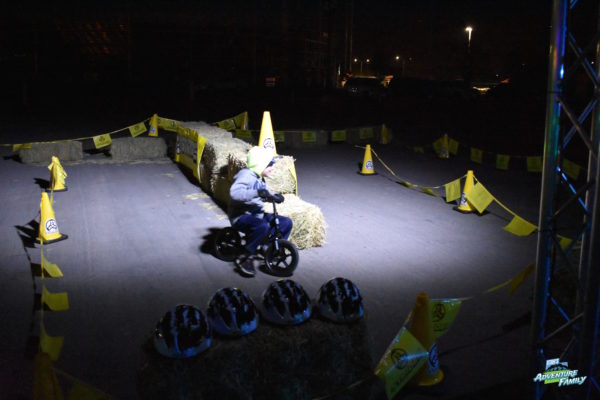 Riding the strider bikes was fun, even for Dad!

There was one scary spot that was specifically designed for the older crowd. Mom and the boys did not walk through, but Dad decided to give it a try. He said things were jumping out and there were many loud startling noises. We decided it was definitely not for our boys. But if you enjoy being scared, make sure to stop after the dragon and walk through the spook alley. 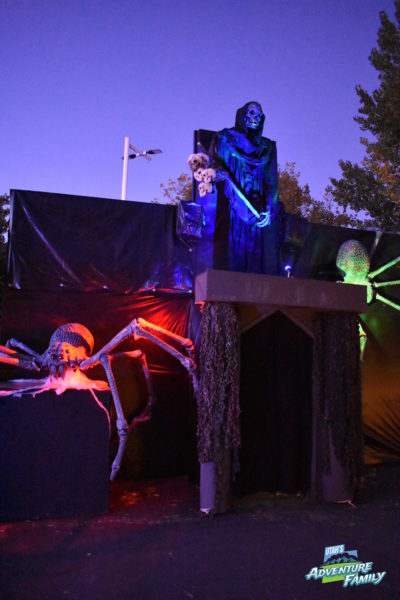 This is the actual scary part of Pumpkin Nights. Do you dare to enter!

Pumpkin Nights is a little pricey. For a family of four, it’s $64 dollars, but they have a special on Mondays and Wednesday and the family four pack is $48. We decided that people pay about this same price for the Haunted Forest or other Haunted things, so if you are looking for a fun family outing that is less scary than all the haunted adventures, this is the spot for you. It’s definitely different than other pumpkin patch type activities that we are used to seeing at Halloween time.

We thought Pumpkin Nights was a lot of fun, and the pumpkins were awesome. It was fun to see the creative ways in which they were carved. We spent about an hour and a half on this adventure, but you could spend longer if you walked through again or wanted to spend more time playing games. Check out Pumpkin Nights for a unique adventure.

We were given tickets to visit Pumpkin Nights, but the opinions are our own.