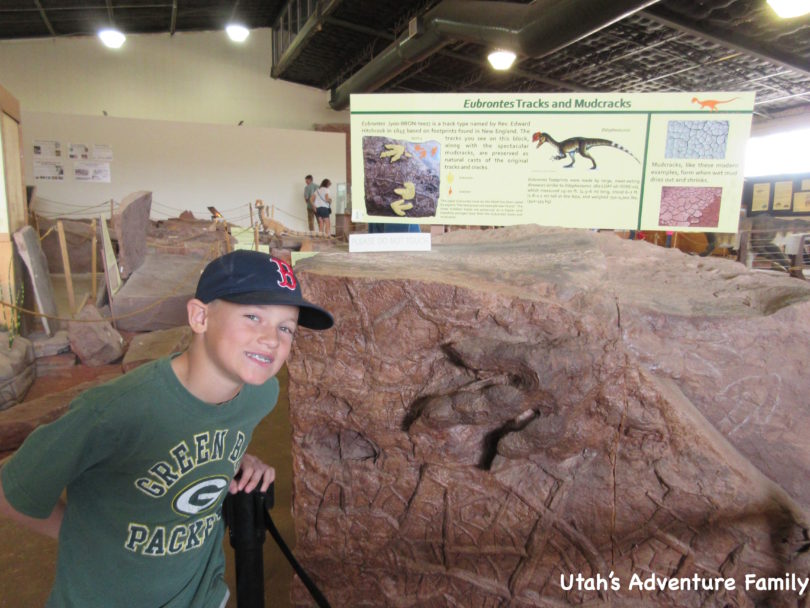 We’ve been to a lot of Dinosaur Destinations in Utah, but there was one in St. George that we’d never visited. In 2000, some developers were clearing a property known as the Johnson Farm. A large slab of sandstone flipped over, and someone noticed a perfect imprint fossil of a dinosaur footprint. Upon closer examination, the rock also had other tracks and traces. Soon, Utah had a great new site for Dinosaur lovers: St. George Dinosaur Discovery Site at Johnson Farm.

The Johnson Farm tracksite is so new that it is still becoming a museum. There is plenty to do there, and it is amazing, but we felt like if we went back in five years, the place would be entirely different. They had several displays, including a large portion of the museum floor still under construction. 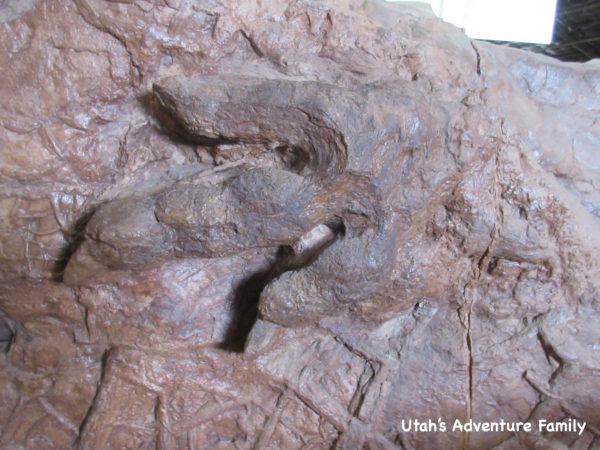 There are some amazing dinosaur tracks to see in this museum. 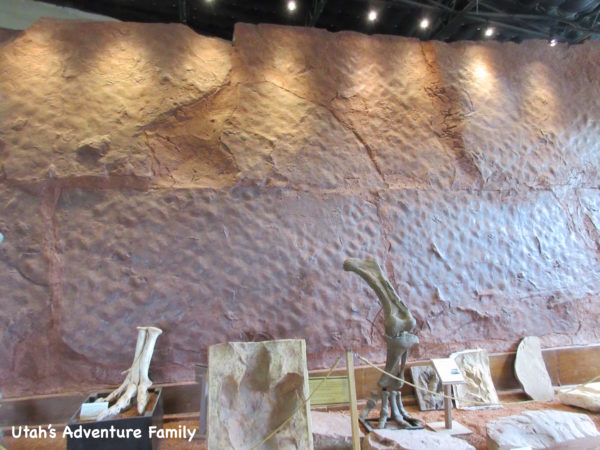 This is one of the largest dinosaur trackways in the world. And it was found right here! 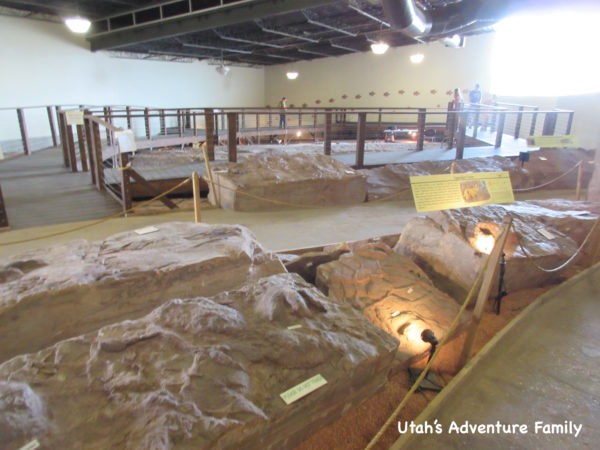 There are pathways to walk through the different exhibits.

The first thing you’ll do upon entering the museum is watch a five minute introductory video. I would recommend that you don’t skip the video. It only takes a few minutes, and it answered a lot of our questions. It has some cartoons as well as dinosaurs, so our boys were interested. 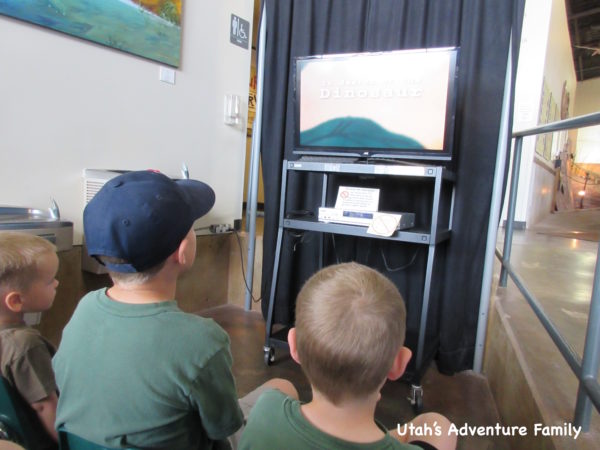 Definitely watch the movie–it gives good background information about this museum and dinosaur tracks in general.

Next, there is a small activity room. The boys enjoyed doing dinosaur rubbings, tracing dinosaurs, making origami dinosaurs, and examining dinosaur teeth. One thing we liked about this area is that there were plenty of informative signs and displays in the craft room, so while the kids were working Mom and Dad could be looking and reading about dinosaurs. We spent a good 30 minutes in this room, and our boys probably would have stayed longer if we let them. You can visit this room at the beginning, or the end, or even both! 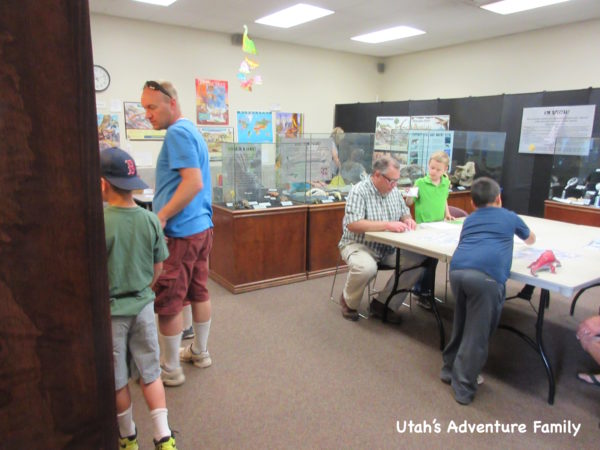 We had a lot of fun in the activity room. 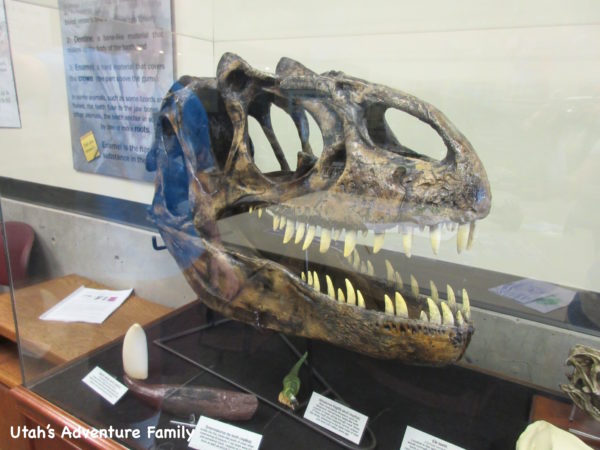 This room is also full of dinosaur bones and other fossils. So while the kids explore the room, make sure you look at what there is to see. 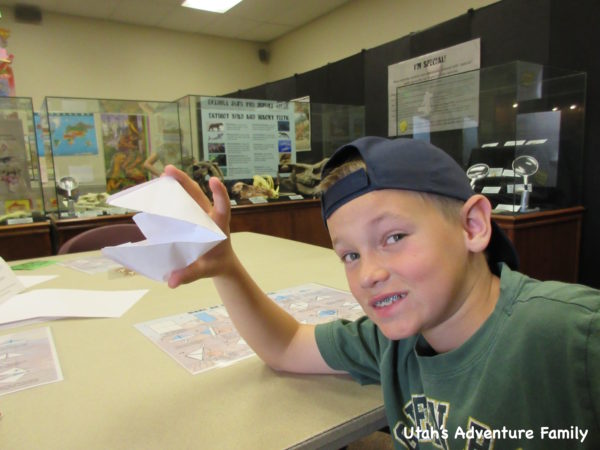 You can make a dinosaur chomper, and Mom also folded a pteranodon! 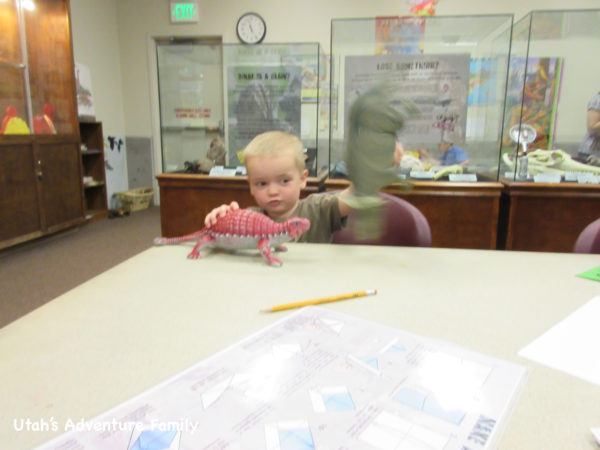 There were even dinosaur toys to keep the littlest ones busy. 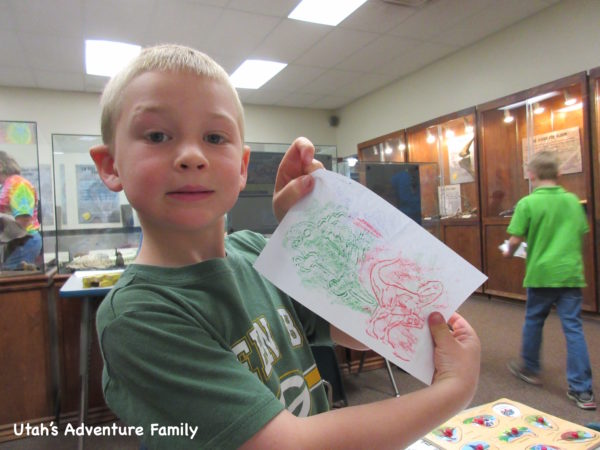 Our boys had fun with the rubbings and coloring activities.

There are puzzles to try as well.

Walk Through the Museum

On the floor of the museum, there are many different sandstone chunks, each with different prehistoric markings. Most show dinosaur footprints from at least three different kinds of dinosaurs, but there are some pretty neat trace fossils of other types, too. One of the best is the dinosaur swim marks. According to the sign, there has been some debate over whether dinosaurs actually swam until this particular fossil remnant proved dinosaurs did swim. There are numerous mudcrack, ripple, tree root, and other fossils as well. You could spend hours and not see all of the fossils. At one end of the floor you can watch paleontologists working on carbon trace fossils of fish (at least that’s what they were doing when we were there). Johnson Farm is a very active dig, so there are paleontologists working everywhere. 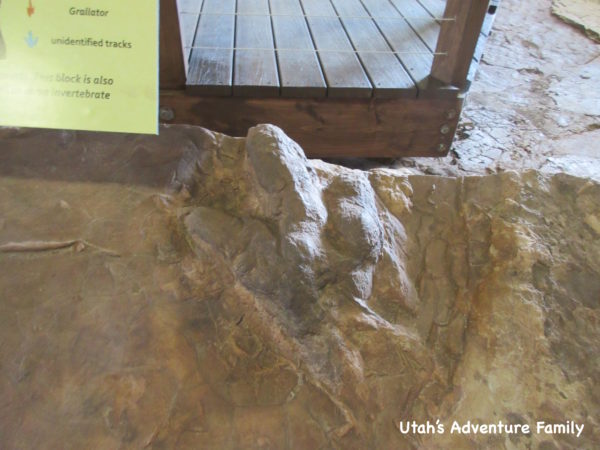 This is the track that was first found and led to the discovery of this huge trackway site. 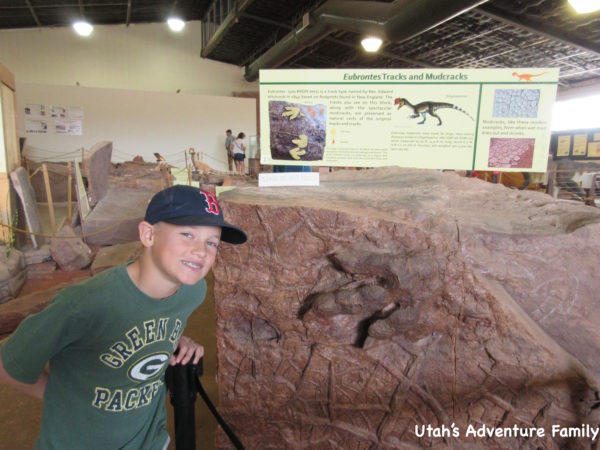 The signs give great info about all the different tracks and fossils here. 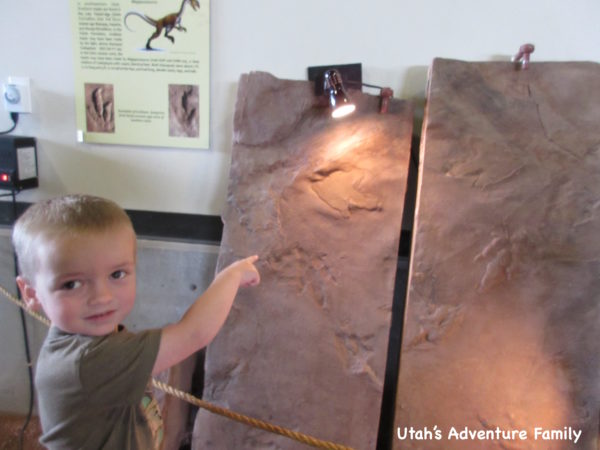 Our boys had fun finding the tracks on display. 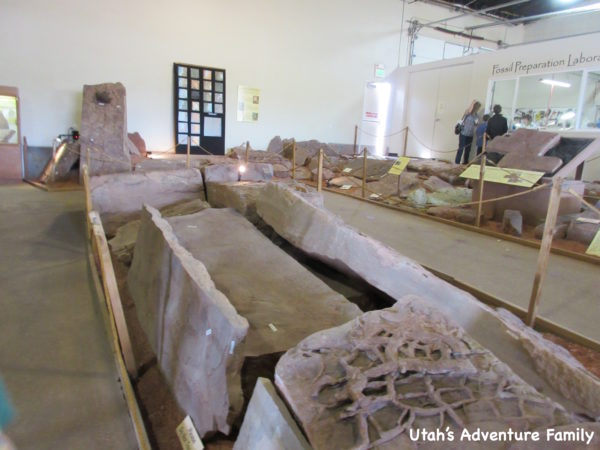 There is A LOT to see here! 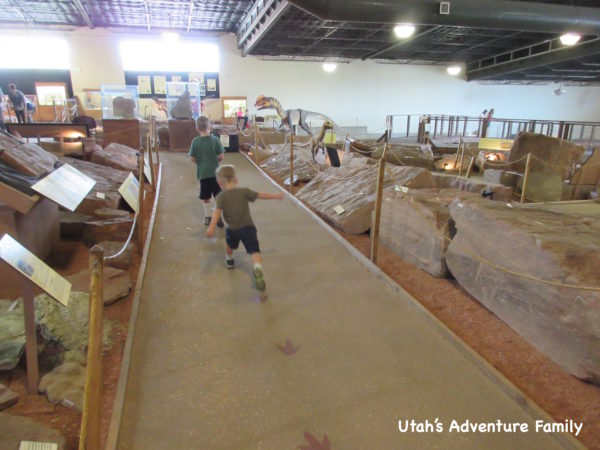 These dinosaur prints lead you in the museum’s recommended direction, but you can really walk any direction. 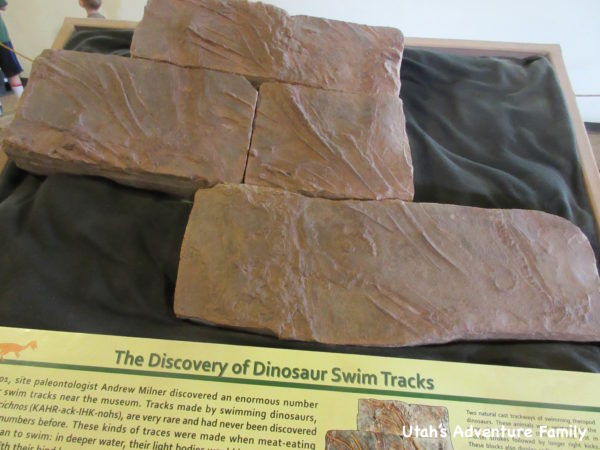 These are the dinosaur swim tracks. They are the only swim tracks ever discovered! 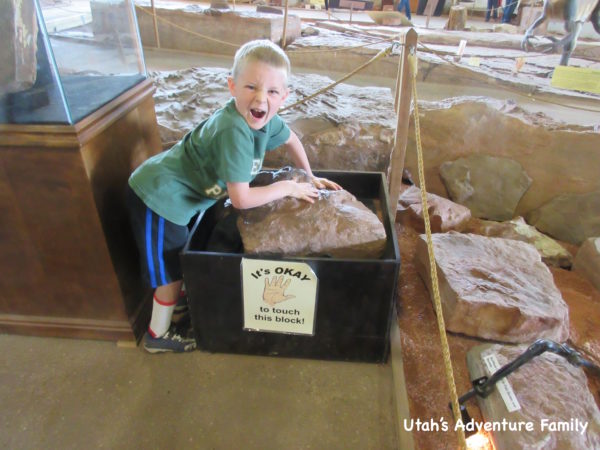 They have a few fossils that are okay to touch which is SO nice because our boys want to touch everything! 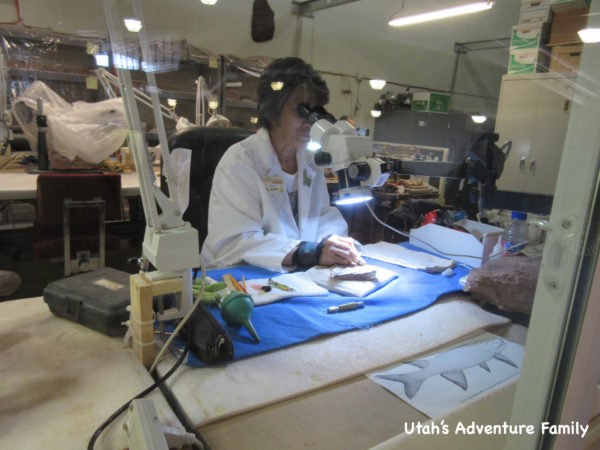 You can watch workers cleaning off fossils. 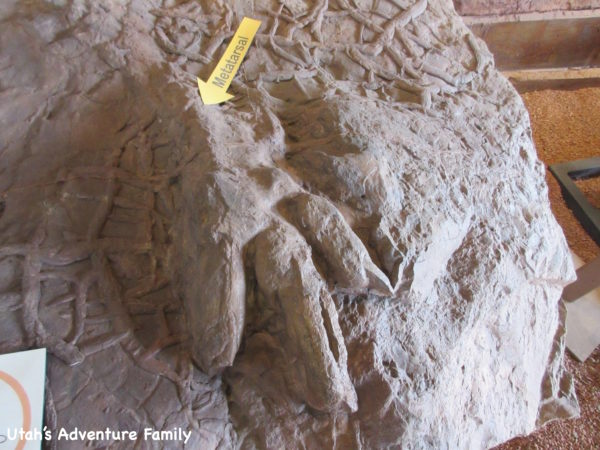 Here’s another amazing track. We couldn’t believe the variety. 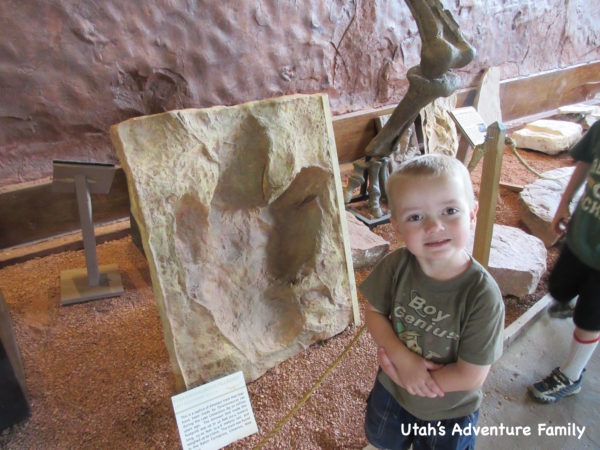 This was definitely the favorite–a T-Rex track. What boy doesn’t love that? 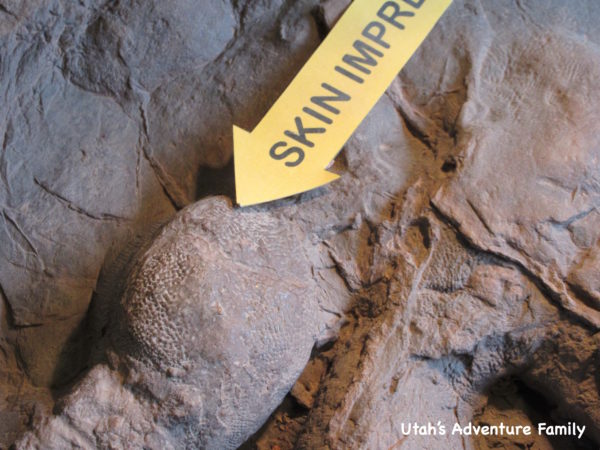 There are skin imprints, too! 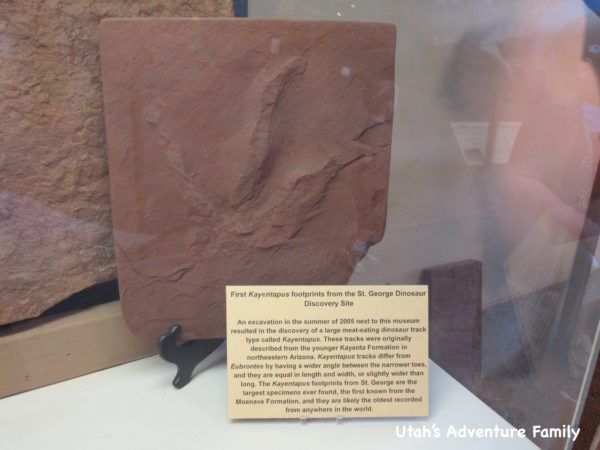 Some of the tracks are in glass cases, while most of them are out in the open.

As you make your way around the fossils, you come to a boarded walkway where they are still removing stones and finding fossils. No one was working when we were there, but you could see fossils they had uncovered recently. There are also some other track marks and fossils marked with signs as you walk on the boardwalk. This is the area of the museum that we feel will continue to change over time! 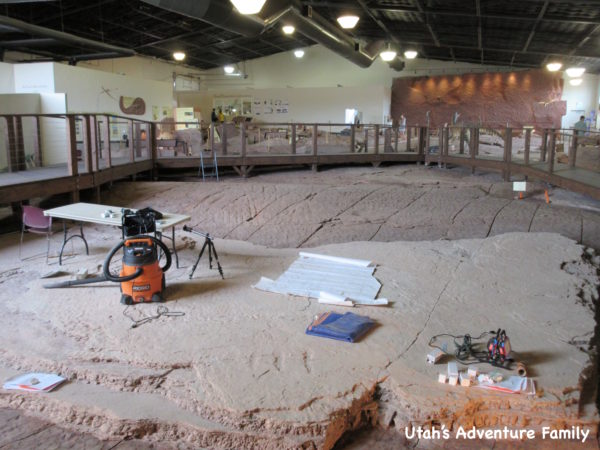 You can see how they are slowly breaking out the layers. 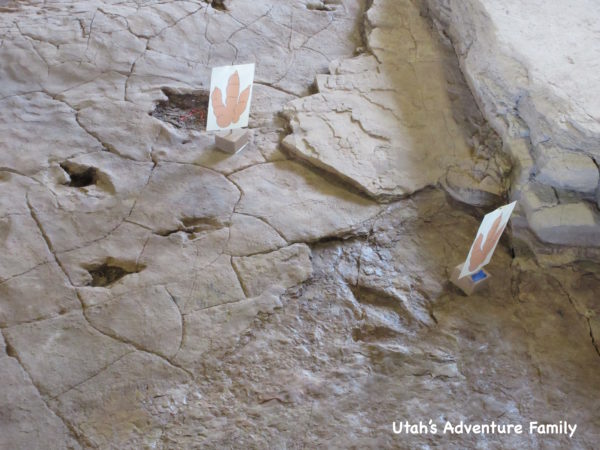 Workers mark some tracks that have been found with these little signs.

The final stop is outside for the kids. There is a small sand box for brushing off fossils, and another where you can make your own dinosaur tracks, as well as a sand pit for the kids to play in. While we were there, some museum workers were making plaster casts of fossils. It was fun to watch. There is a little path to walk around and see fossils, and a shaded pavilion to sit for adults. We spent another 30 minutes here, and once again, our boys would have stayed longer if we’d let them. All in all, plan at least an hour and a half to two hours for the Johnson Farm Dinosaur Site.

Some of the museum workers were outside making a cast of something! It’s so fun that it is an active site! 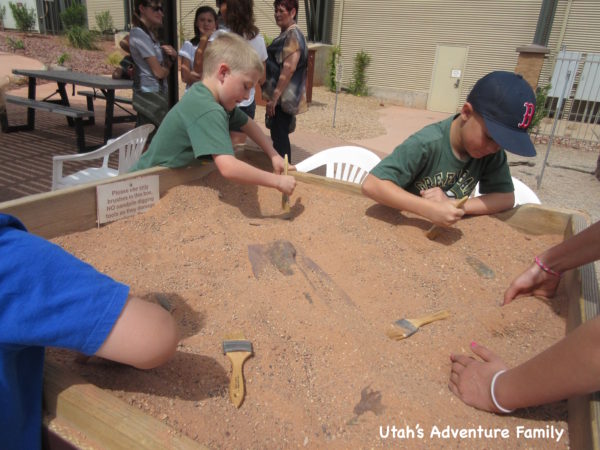 In this box, kids can brush the fossils off with brushes. When you are done, cover them back up for others to discover. 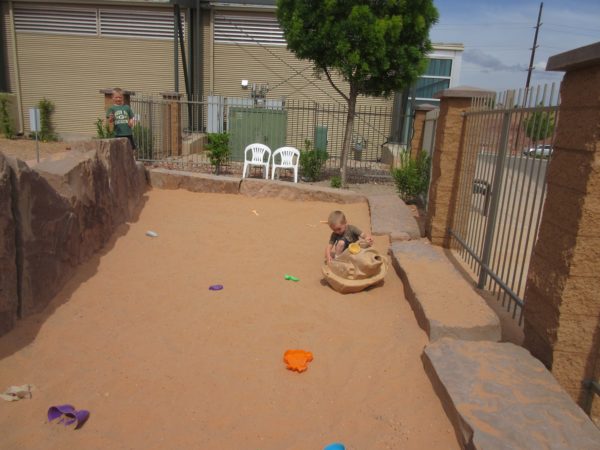 This big sand area is fun for all ages. 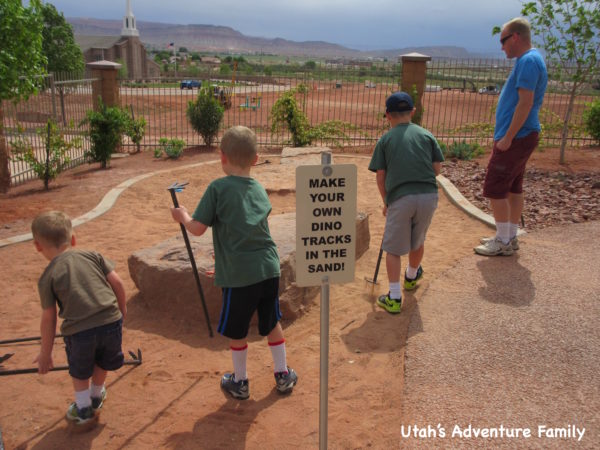 This spot was super fun. We have never seen a spot where kids can make dino tracks at any other museum.

And you can have a little photo fun, too!

We thought this amazing dinosaur museum was well worth the price. They even have a group rate for groups larger than 10 so if you have a large family, or travel with some friends. For more info on their prices and hours, check their website.

St. George Dinosaur Discovery Site at Johnson Farm is located at 2180 E Riverside Drive in St. George. From the north, take exit 10 (Green Springs Dr/North Green Spring Dr) in Washington. Head west (left) off the 1-15.  This road is 3050 E and it turns into Riverside Dr. The Dino site will be on the left side of the road.

From the south, take exit 6 (Utah 18) and stay to the right as you exit. Turn right on Riverside Dr. Then follow this road to the Dino museum. It will be on your right.