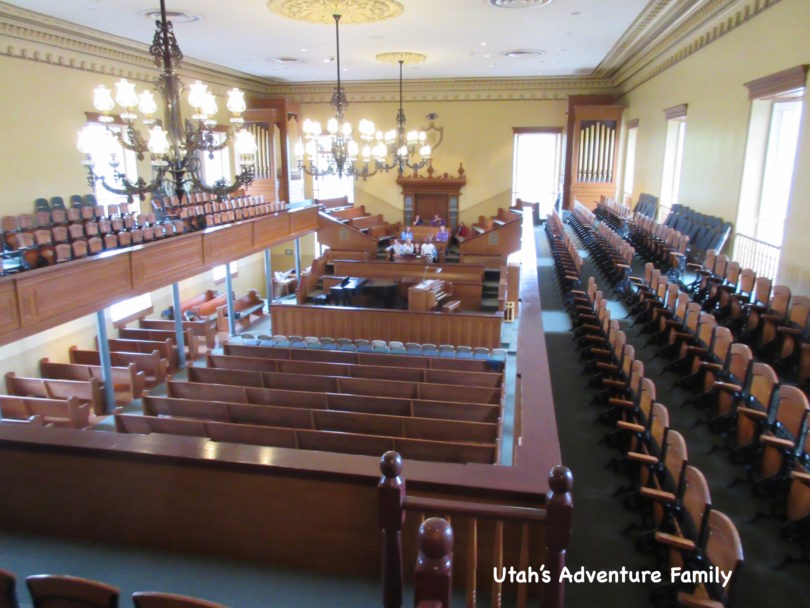 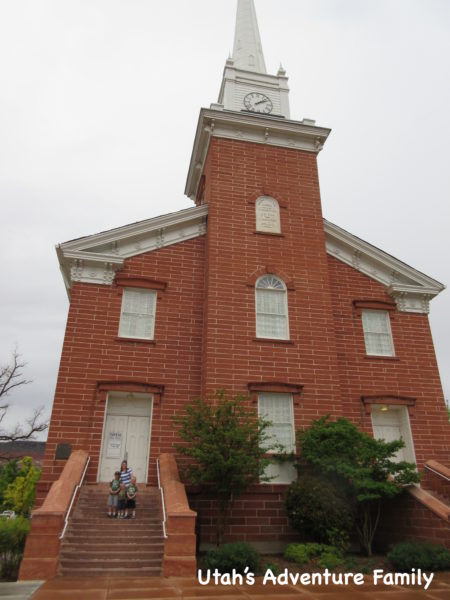 We like to visit old LDS Church sites and there are 5 near St. George that we visited on our recent trip to Zion (Pipe Springs National Monument, Brigham Young’s Winter Home, Jacob Hamblin’s Home, and the St. George Temple Visitor’s Center).

We enjoyed visiting the Tabernacle in St. George as much as any of these. St. George was established as a “cotton mission,” meaning that saints were called there to grow cotton after the Civil War. Brigham Young visited St. George and asked the people to build a Tabernacle. It took 11 years for them to complete the project, and after they finished, they were asked to build a temple.

One of the interesting facts about the Tabernacle is that when Brigham Young visited to check on the progress, it was nearly done. However, he said that the balcony was five feet too high. Since the spiral staircase was already finished, it was virtually impossible to lower the balcony. Brigham and the head builder argued for three days about this, until finally, it was agreed to lower the entire balcony. This was accomplished by leaving the spiral staircase and balcony where they were and making 5 steps down to the balcony. Then, 200 strong men standing on platforms lifted the balcony while the posts were sawed off one foot at a time. This process was repeated 5 times until President Young had the balcony where he wanted it! 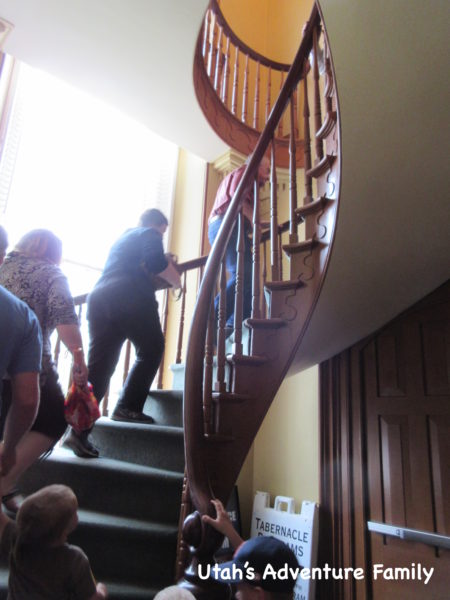 The spiral staircases are beautiful. 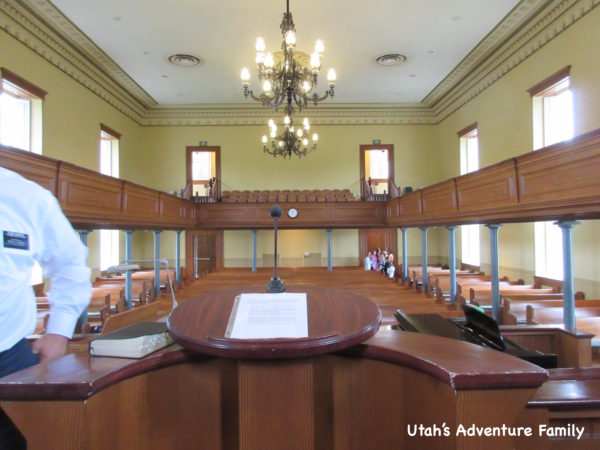 If you look to the back, you can see the doors and then the staircases that lead down to the lowered balcony. 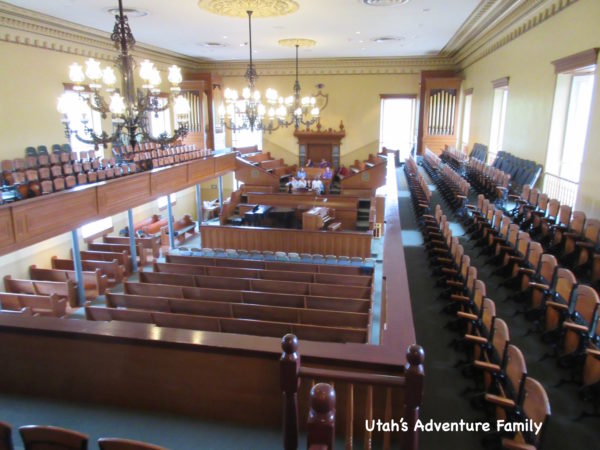 The tabernacle has a lot of beautiful details in it.

The tour of the Tabernacle ends at the pulpit, where President Lorenzo Snow made his famous speech about Tithing. Our boys had recently learned this story, so it was especially meaningful for them. Every latter-day prophet, except Joseph Smith, has spoken from that pulpit. 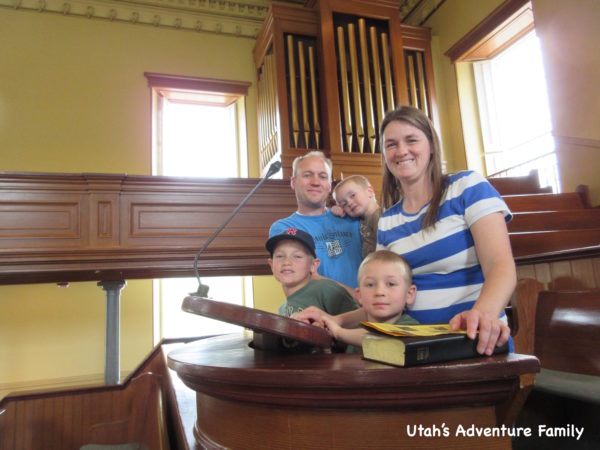 One nice thing about the Tabernacle tour is that it is pretty short. If you have 30 minutes to spend in downtown St. George, you can easily do the tour. It is surprisingly different from the tabernacles we’ve visited in Salt Lake and Paris, Idaho, but it was a must-do in St. George. 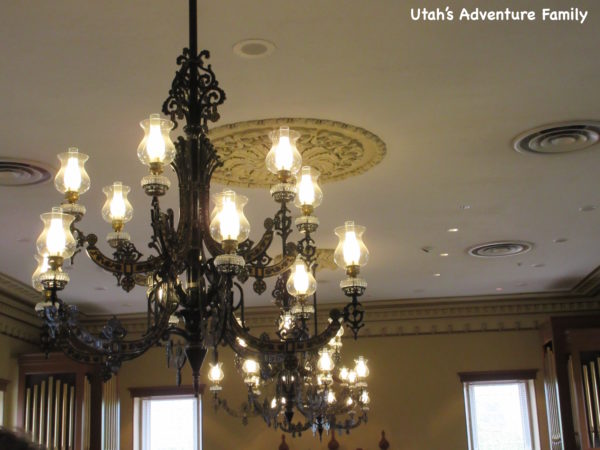 These chandeliers are huge! 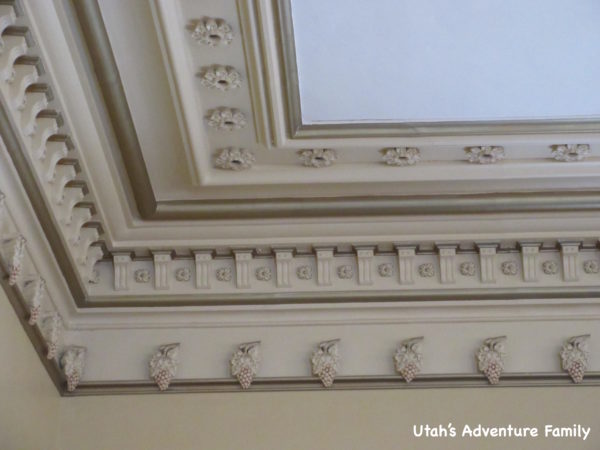 They have the mold on display that the pioneers used to make these fancy moldings. 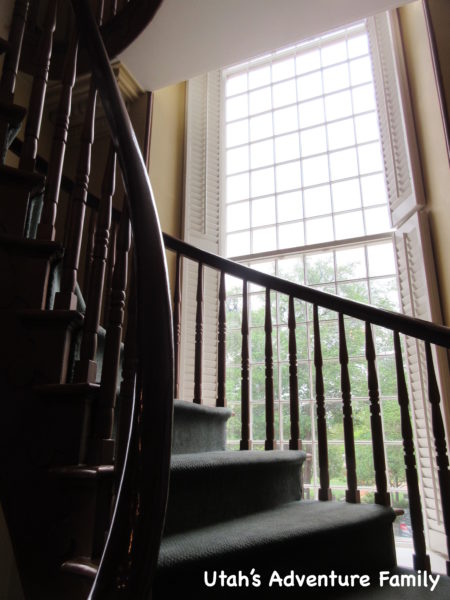 There is an inspiring story about the windows in the tabernacle, too. The pioneers gave so much to help complete these amazing sites.