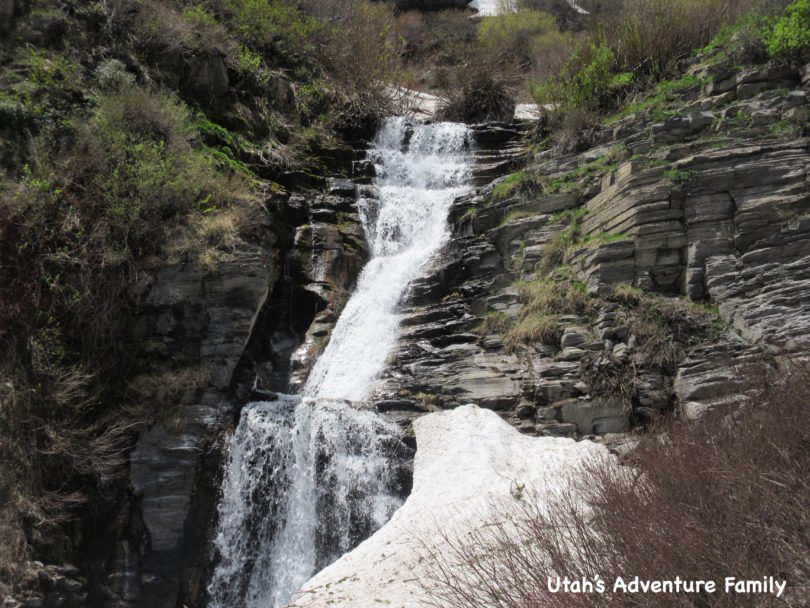 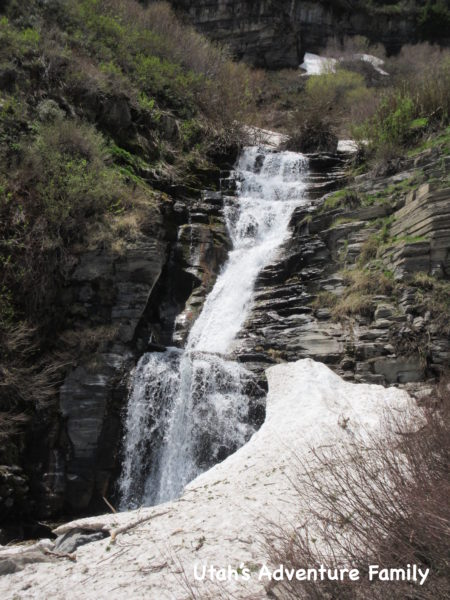 We love waterfall hikes, so today we took the boys on a brand new adventure to Timpanogos Falls. These falls are best to see in the Spring when the water is really coming down off the mountains, and in early May, the falls were gorgeous. There are actually two waterfalls here: Upper and Lower Falls. We will give you all the info you need to hike to one, or both, of Timpanogos Falls. 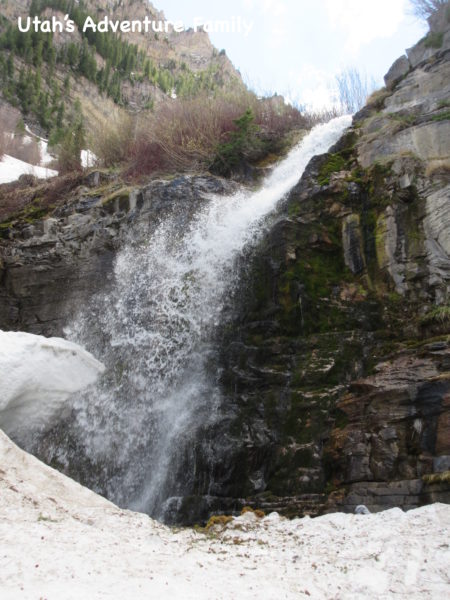 The trail to these falls lies along the Mount Timpanogos Trail that begins at Aspen Grove. That means that if you’ve ever hiked Timp, from the Provo side, you’ve passed right by these waterfalls, which are just trickles in September.

To access this trail, drive up Provo Canyon to the Sundance junction. Turn left toward American Fork Canyon and drive to the gate. It costs $6 to go past the gate, so some people prefer to park before the gate and walk in, but we feel like $6 is well spent on our National Forests. There are two trailheads at the parking lot for Timp. The one on the left is Stewart Falls, and the one on the right is Mount Timpanogos. 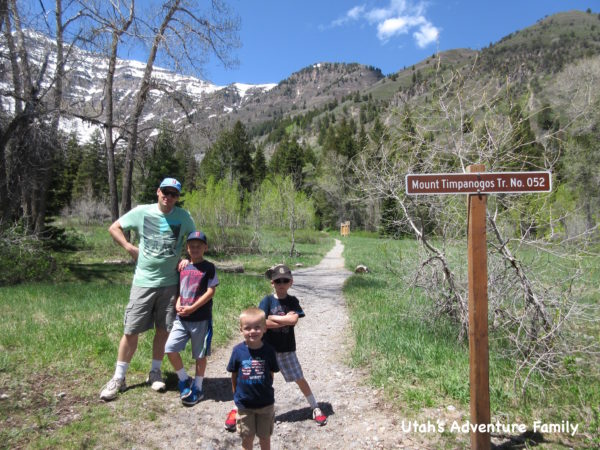 This sign marks the start of the trail to Mt. Timpanogos.

The trail climbs fairly steeply, but after a couple hundred yards it actually becomes paved and easy to follow. There are a few switchbacks as the trail climbs toward lower falls, but the scenery is beautiful, and the path is well-traveled. Our 3 year-old hiked all the way to lower falls, which is almost exactly 1 mile (2 RT). 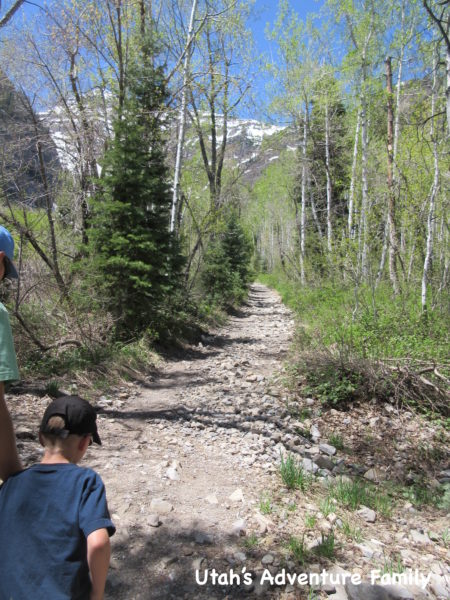 There are some rocky parts to this trail. 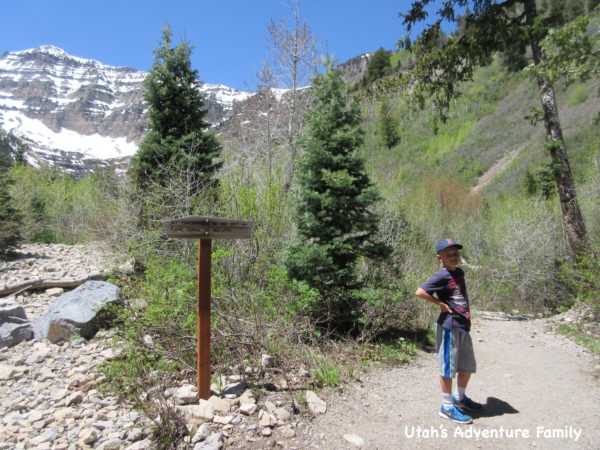 Follow the signs to the waterfall. Go right at this junction. 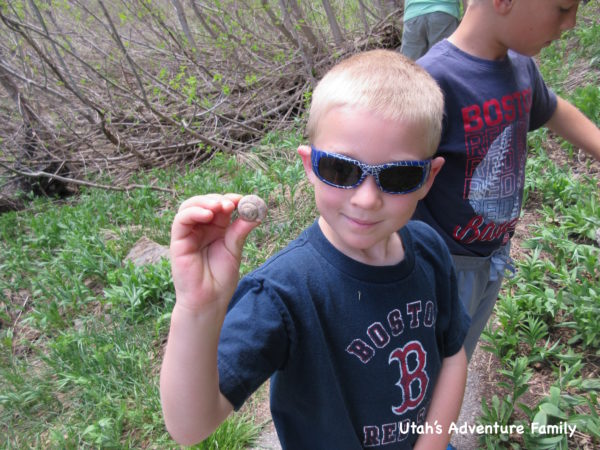 We found a ton of shells along the trail, so watch for them! 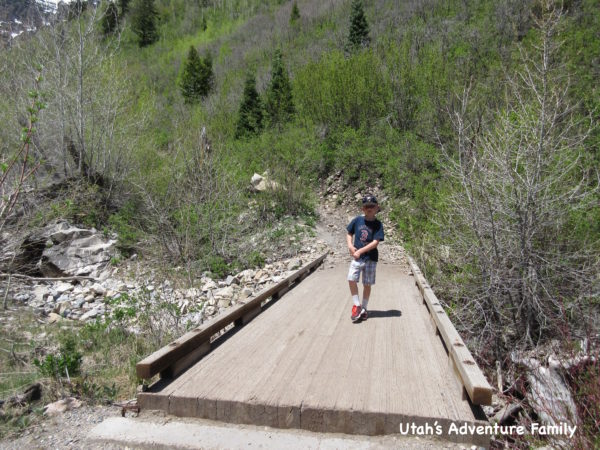 You will cross a small bridge, but there was no water running underneath. 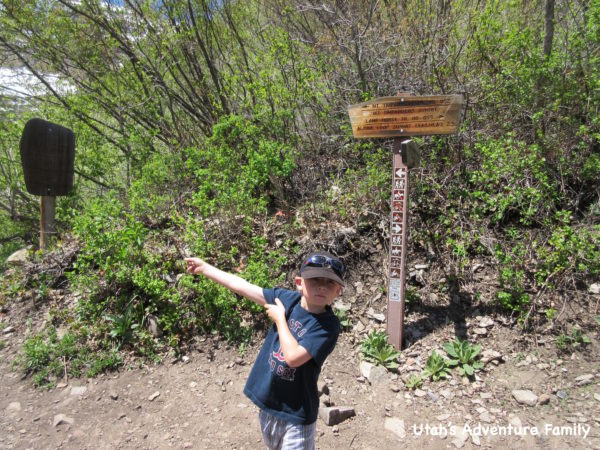 Go left at this junction and head into the Timpanogos Wilderness. 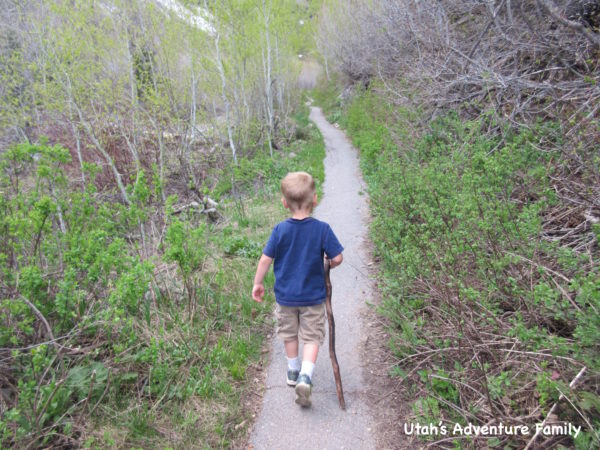 Part of the trail is paved which is sort of ironic in the mountains. 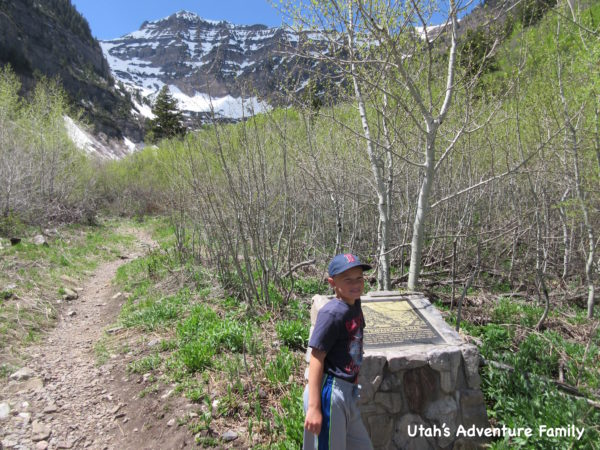 There is an interpretive sign about the mountain peaks. 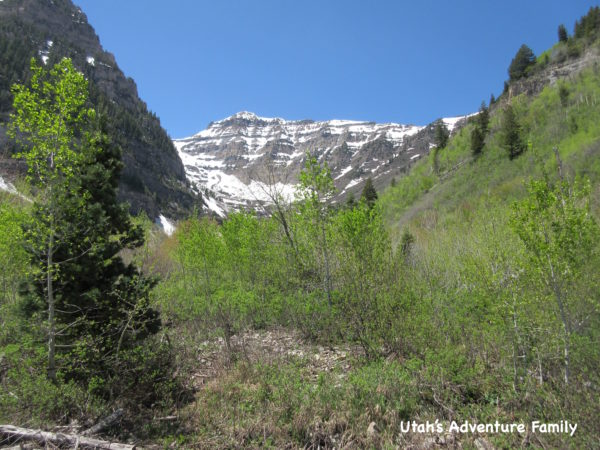 It is a very beautiful trail. There isn’t much shade though. So come prepared with hats, sunglasses, and sunscreen. 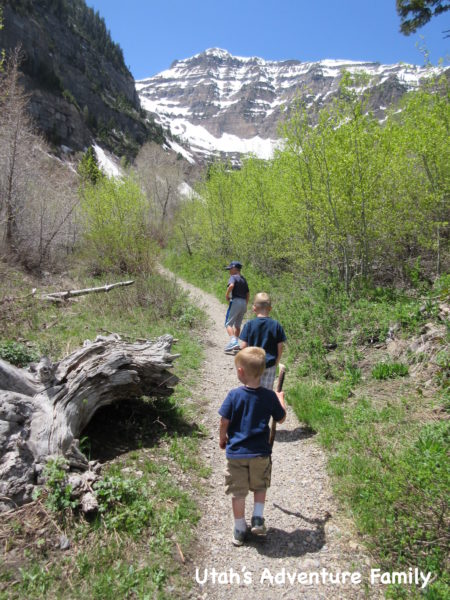 These boys were great hikers. They made it to the waterfalls with no complaining and this trail was hard.

You will begin to see and hear the lower falls which helps keep everyone excited to see the waterfall. We caught glimpses of the waterfall slightly past the halfway mark. When you arrive at the waterfall, there are a few places to walk down and get closer. In May, it was still covered with snow, and we decided not to walk any closer, but I’m guessing that in the summer you would be able to get pretty close to the base of the falls. Leave a comment below if you go when there’s no snow and let us know what the waterfall was like and how close you were able to get. 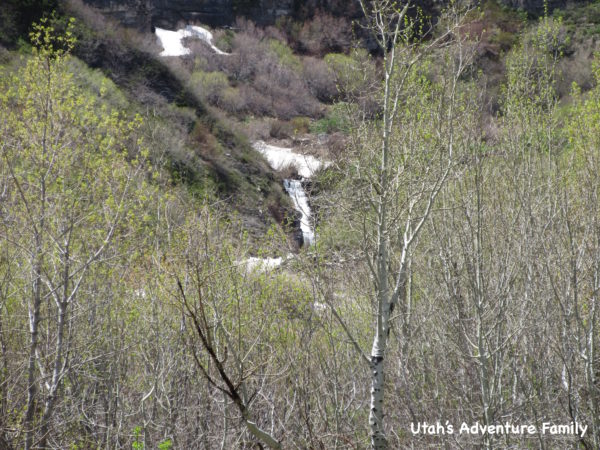 We definitely got very excited when we caught a peek at Timpanogos Falls. 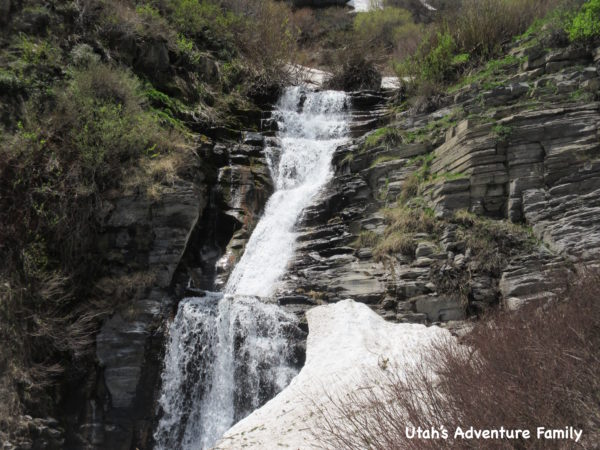 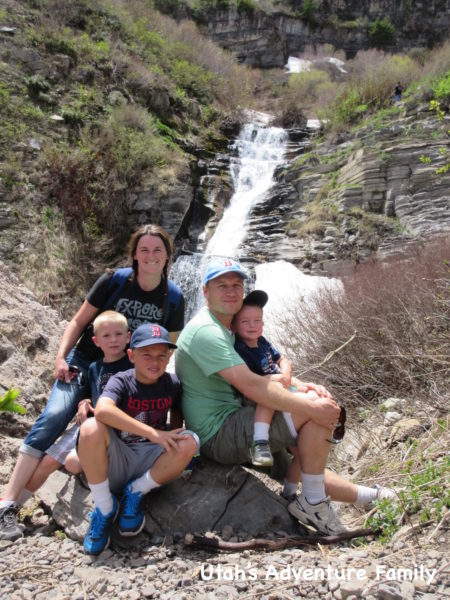 There were others on the trail, so we were able to catch a family picture, which is rare! 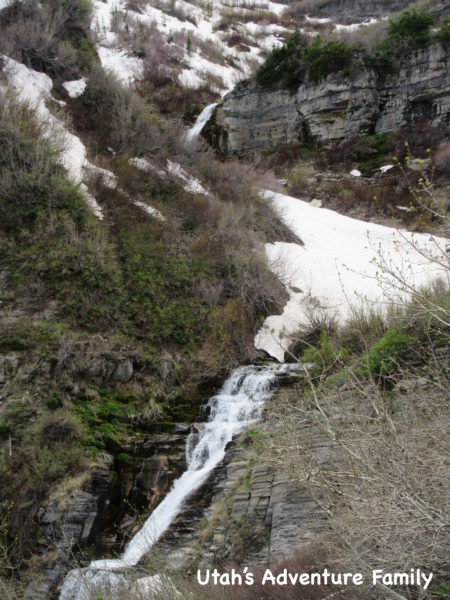 Here you can see Lower Falls and Upper Falls. 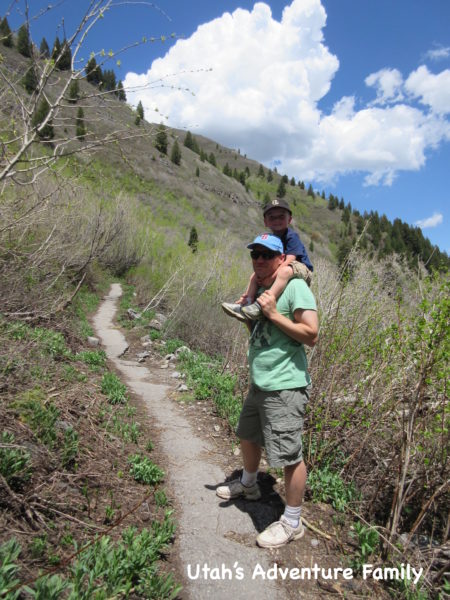 The trail walks away from the waterfall before turning back towards the Upper Falls. Don’t worry, it’s only about 10 minutes. 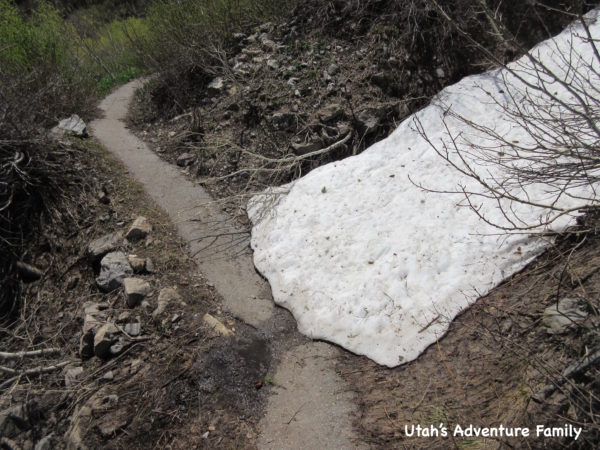 This was the only snow near the trail, and our boys were very excited to cool off with some snow. 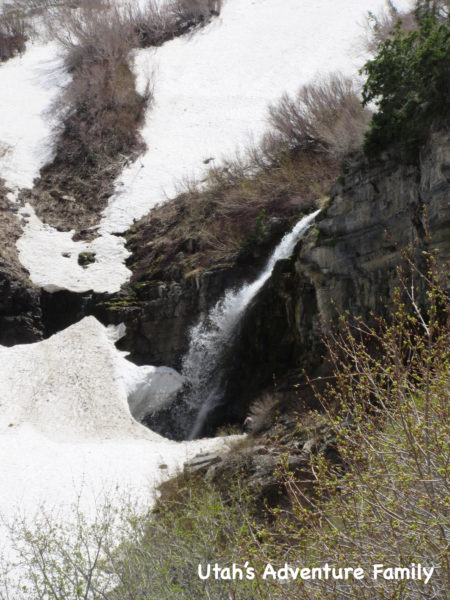 Shortly after you turn back toward the waterfall, you’ll be able to see Upper Falls. 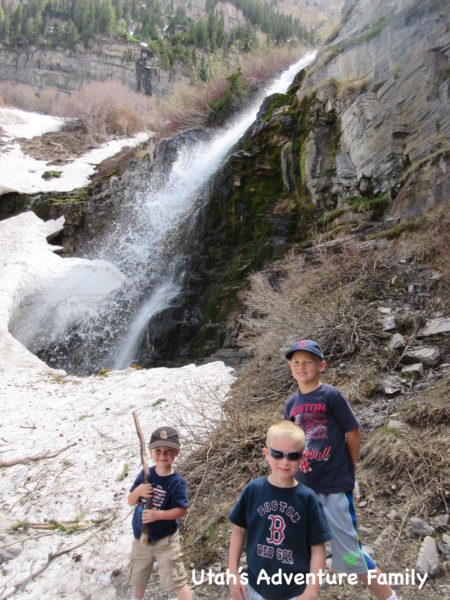 Upper Falls was quite amazing as it fell down below the snow pack.

Dad wanted to see the falls up close and specifically, how thick the snowpack was that was lying in the ravine at the bottom of the cascade. It turns out the snow was about 15 feet thick, which made it safe to walk on as long as you stayed away from the edges. If there is snow when you arrive, please be careful. It may not be safe to walk on, and you could end up with a dangerous, frigid plunge. 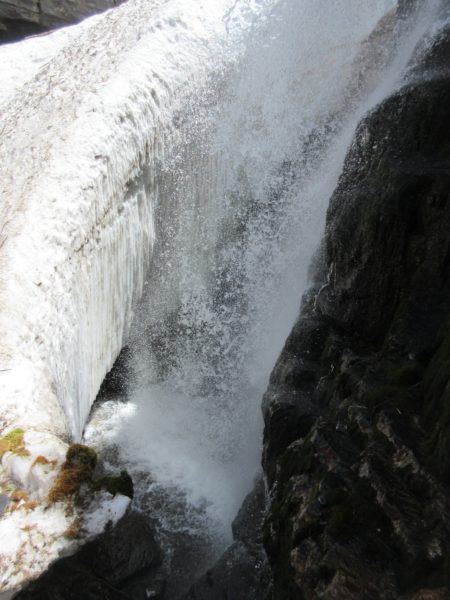 This is a look down under the snow where our dad headed down to take a video. 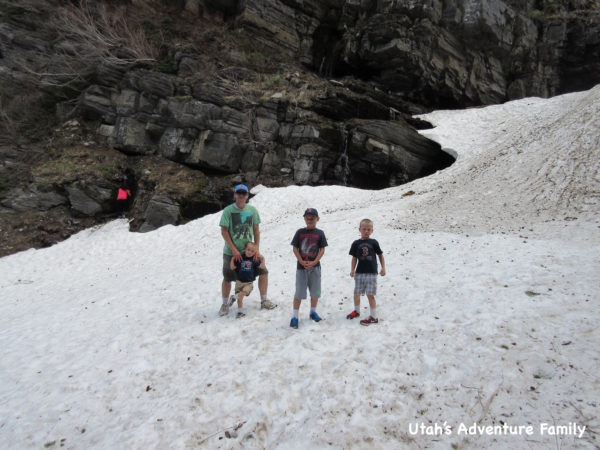 We had a little snowball fight out on the snow, but always be careful around snowpack. 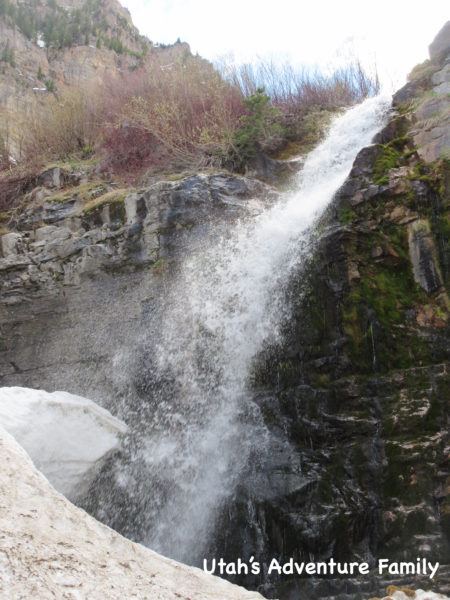 Upper Falls is quite spectacular.

The waterfalls are really rushing, though! Check out the video and do this hike before the snow all melts off Timpanogos. We actually saw 5 different waterfalls higher up as the water comes down as runoff, so there is plenty to explore.

We’d suggest that this hike is moderate compared to the easier hikes listed on the waterfall link above. The length (2.5 RT) and relative steepness make it a bit more advanced, so start with the others. But if you manage to wear out that list, try Timpanogos Falls!