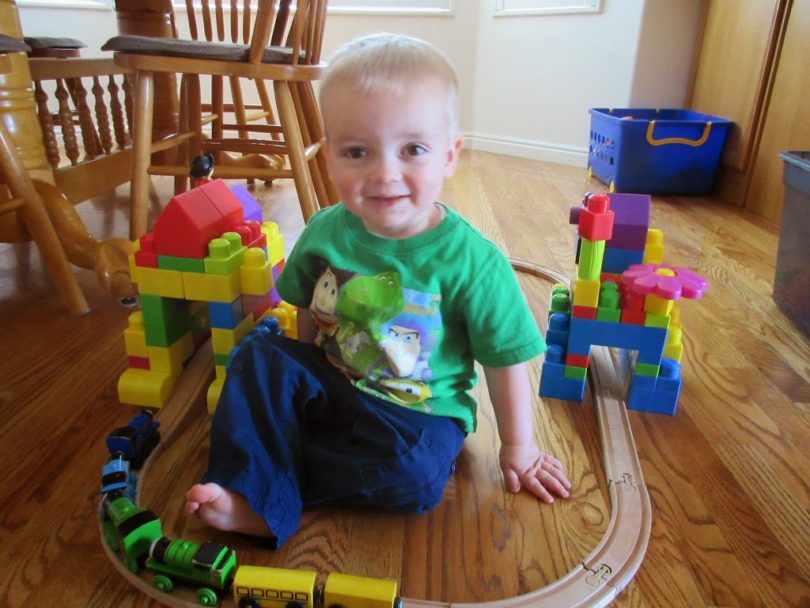 This last week we attended the Model Train Show at Thanksgiving Point. This exhibition is in its twentieth year and was held in the Big Red Barn. We felt that this show was for pretty serious “trainers” only. There were a few big models set up which the boys really liked, but this was essentially an event run by vendors to sell over-priced train gear. The cost was $5 for each adult and the kids (under 12) were free.

The entire floor of the barn was taken up by large models. Our two favorite were the Lego model and the Garden model. The Lego model was nice because it had plenty of visual things going on with different Lego structures, but there was only one small train running around the track. Imagine a display as large as your living room (20′ x 20′ at least) with hundreds of feet of track but only one small train 4 cars long running through it. The Garden model train was a simple oval stretched out the length of the stage (maybe 50 feet) and had easily the largest train. Each car was about the length of a loaf of bread (and a little taller). Our boys most liked this model.

Though the boys did enjoy looking at these models and our 2 year-old was all eyes and excitement, we won’t do this event again. It was clearly a gathering of old men pretending they’re still little boys but with more expensive toys.


Okay, that was Dad writing a review. Mom, on the other hand, had planned on the show being exactly as Dad explained, so I had way lower expectations. I thought it was definitely too expensive, and that is the main reason we won’t go every year, but I thought that both our boys would have spent longer if their dad hadn’t been trying to escape out the door. Yes, it was an event for grown-ups who have their own special train sets, but I thought looking at all the details that these people put into their train displays was kind of fascinating. Watching the trains was fun, but I couldn’t do it for too long. They needed to have other activities going on as well, but who am I to plan their events?