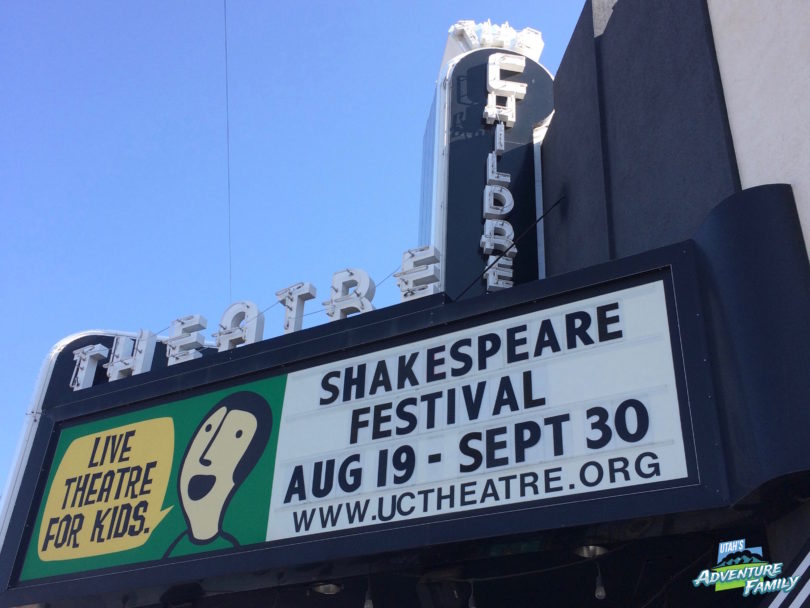 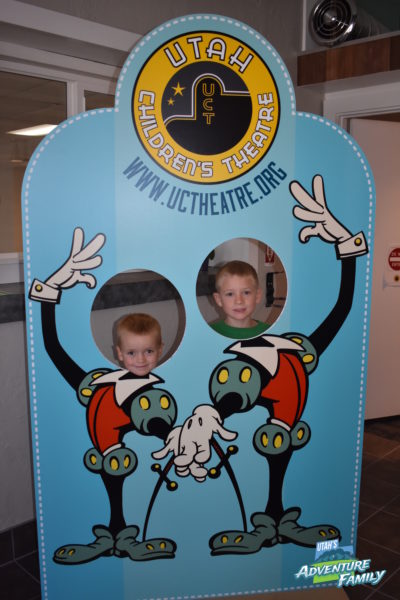 We saw the play Pinkalicious at the Utah Children’s Theatre earlier this year. We liked it so much that we when we saw UCT was doing a Shakespeare Festival we decided we had to take our boys. The festival included games, puppet shows, face painting, and plays. Best of all, there was no entrance fee and many activities were FREE.

Theater is one of our favorite things to do with our boys, and it’s pretty hard to have them experience Shakespeare in a meaningful way. But this activity was perfect. We arrived at the theater and were directed to a small building to the north. There we were given a schedule of shows. There were four Shakespeare POP plays that taught about Shakespeare. These were FREE and lasted just 10 minutes each. There were also four puppet shows that cost $1 per person each. We watched two of the plays and one puppet show in the small theater. This was the best part of the visit. 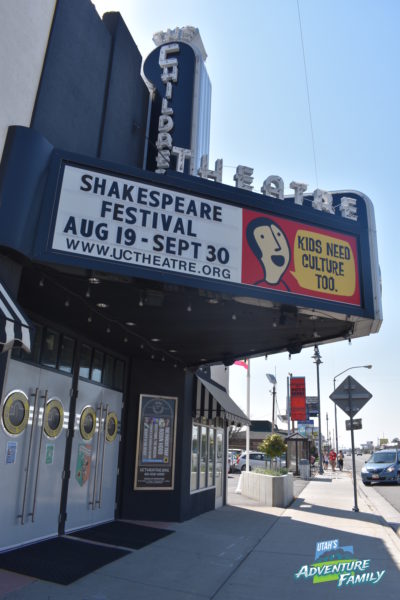 The Utah Children’s Theatre did an excellent job with their Shakespeare Festival, and it was so neat that most of it was FREE.

Our favorite show was the 10 minute, modern day riff on Romeo and Juliet. We laughed so hard as Juliet texted Romeo, the action was fast-forwarded, and the players invited guests on stage to take the part of the actors. When Romeo had to go to the bathroom, and Juliet found herself being towed for double parking, willing participants were pulled from the audience to finish the show. We had such a great time! We saw another show that gave background information on Shakespeare that really helped our boys understand tragedies, comedies, and histories. Finally, we watched a puppet show called A MidSummer Night’s Nap, in which a puppet Shakespeare dreamed up a great idea for a play. 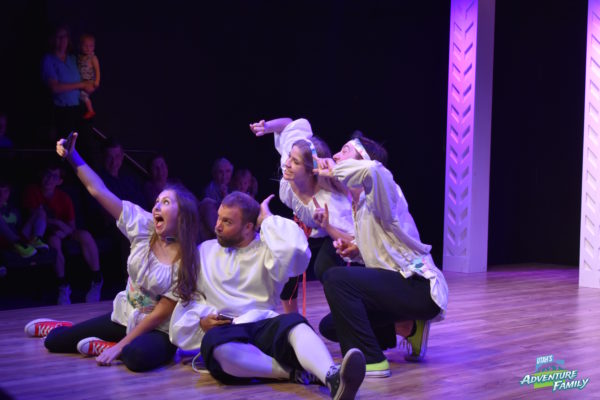 Romeo and Juliet was definitely our favorite show this year. Make sure to check it out. Here they are taking a selfie! 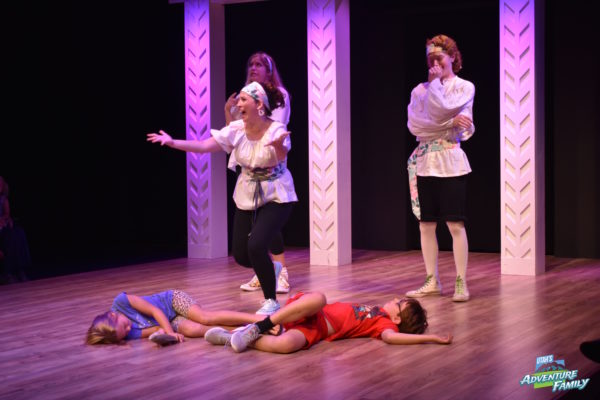 We loved that they involved the audience in all of their shows. These two got to play Romeo and Juliet for a bit, and in another show they asked all the kids to come up and be trees. 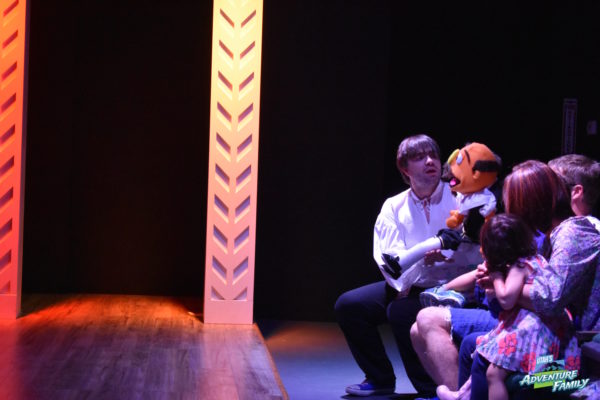 Shakespeare the puppet sat right in the audience and interacted with lots of audience members. 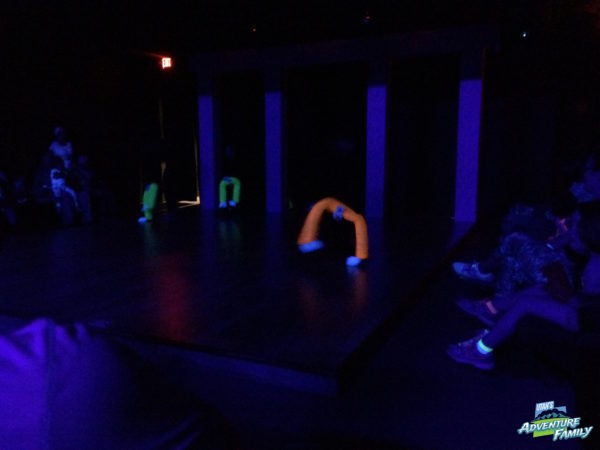 Shakespeare’s dream was a black light puppet show, which the boys enjoyed. 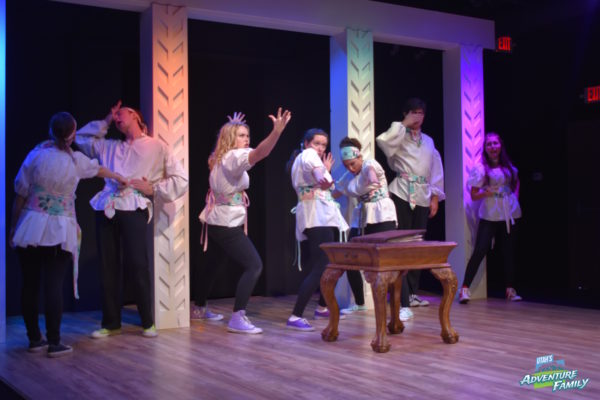 We saw another show called Shakespeare’s First Folio that taught us more about Shakespeare. 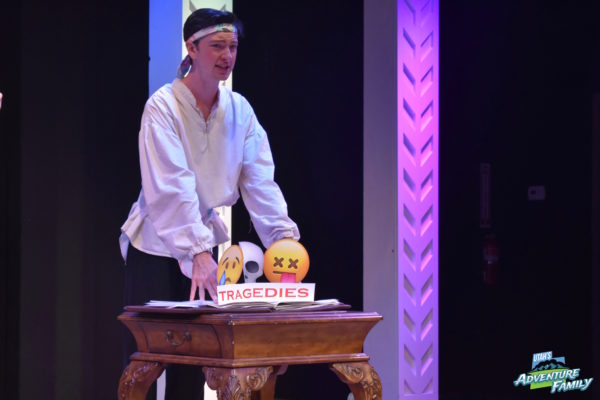 We learned about comedies and tragedies.

As we waited for these shows, there were games in the lobby. We mini-bowled with small wooden balls, fired an air-pressured crossbow bolt, and practiced archery. In an adjacent building we found other activities including a sled ride for the kids where they jousted with a foam spear. There were medieval games like chess, Ring-Swing and other wooden toys. Our boys enjoyed this area, too. There were also a few crafts and face painting  that cost a couple of dollars, if you are interested. 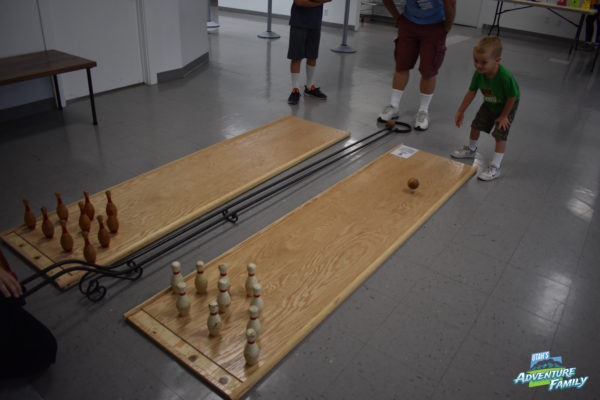 We had fun bowling on the mini bowling lanes. 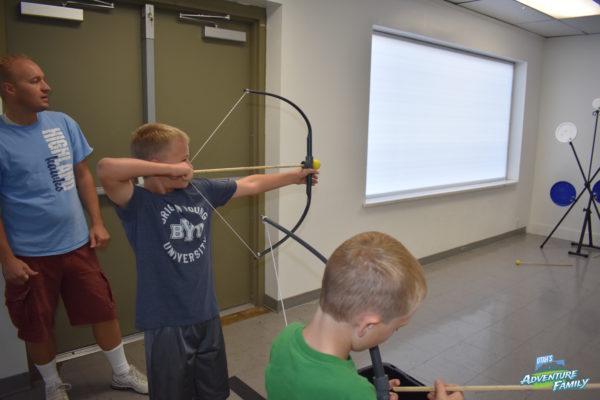 The boys finally got the hang of archery. 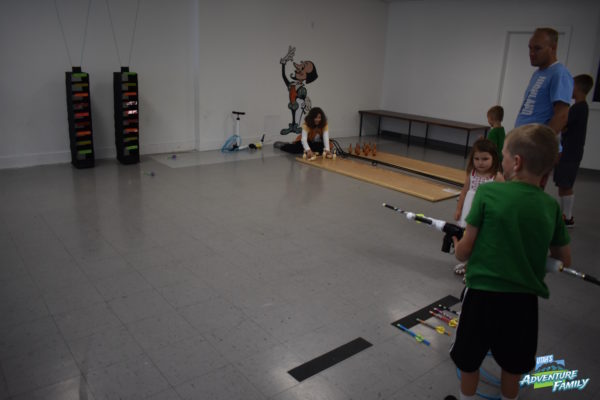 Everyone love shooting the rocket bullets with the air gun. 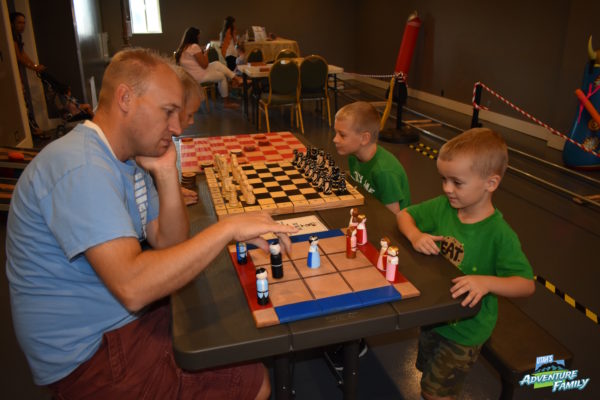 This room was full of games. 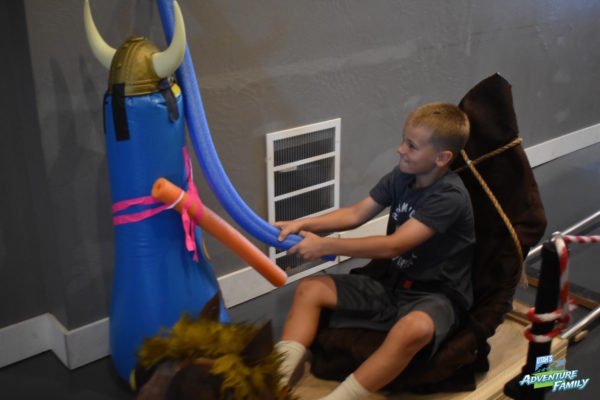 The jousting was short, but fun! 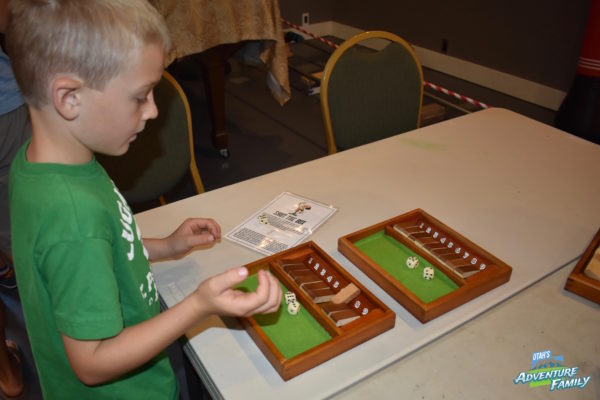 We probably played this game the most. It’s called Shut the Box. Perfect for math facts!

After the festival ended, we found that there was a bonus show that cost $7 per ticket. It was a condensed version (40 minutes) on Romeo and Juliet, and all of our boys wanted to stay. This show was really good, and just right for our 5, 8, and 11 year-old boys. The play used Shakespearean language, but was skimmed down to fewer scenes. Our boys weren’t used to unhappy endings, but we were glad they could experience a tragedy! Luckily, afterward our 5 year-old said, “They’re not dead. They were just pretending.” They also have a full length show of Comedy of Errors playing right now, too. 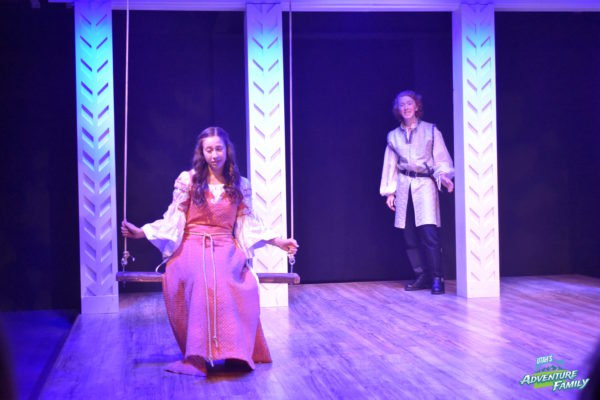 We enjoyed the shortened version of Romeo and Juliet, and we loved that our boys could experience a little Shakespeare. 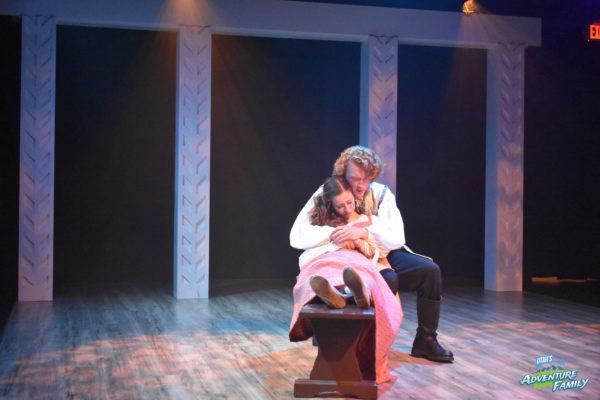 We agree with the actors that Shakespeare is meant to be watched and not read! 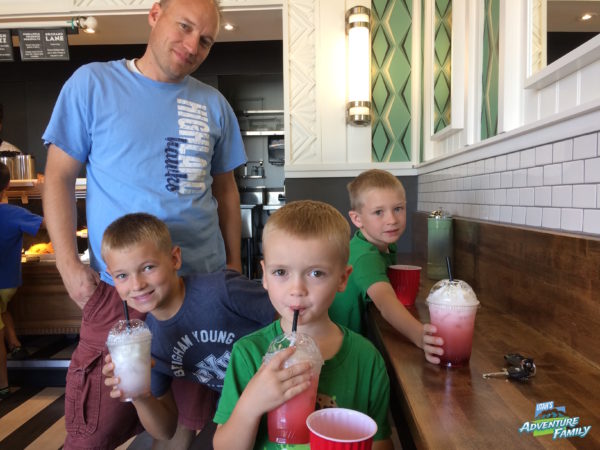 We love the little treat shop that they have with sweets and these delicious Italian sodas. And they let you take them in the theater which is awesome.

We really loved the Utah Children’s Theatre Shakespeare Festival. The tagline for their festival is “Shakespeare for children and adults with short attention spans.” It’s perfect! Though you can do most of the activities for FREE, plan on spending a few dollars to see some of the shows and do a few activities. You’ll be glad you did.