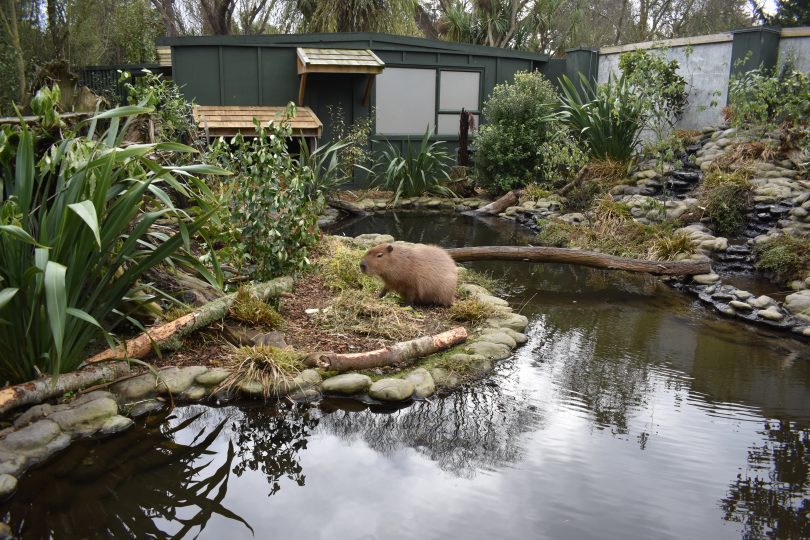 When we went to the South Island of New Zealand, we really wanted to see a kiwi. Despite several hikes in old growth rainforests, we didn’t spot one in the wild, of course. (That’s nearly impossible!) Luckily, we got a chance to see four kiwis at Willowbank Wildlife Reserve in Christchurch.

Willowbank Wildlife Reserve is what we might call a zoo here in the US. There aren’t high-ticket animals like lions, tigers, and bears, though. Instead there are sections for New Zealand animals, farm animals, and exotic birds. Best of all, you can spend a little money to buy food and feed the animals yourself.

It costs to buy food for the animals, but make sure to spend the money on birdseed, large animal food, and especially eel food. (The fish food wasn’t really worth it.) Start with the eels. They get a spoonful of raw meat, and it is a bit intimidating to feed them. As soon as we picked up a spoon, several of them lifted the front part of their bodies out of the water and moved toward us. They are good at eating off the spoon, and very excited when they see you coming! We enjoyed feeding the eels the most.

There is plenty of birdseed for the geese, ducks, pheasants, chickens, and various wildbirds at the reserve. Our boys enjoyed sprinkling a little food around, and some of the animals will eat right out of your hand. Of course, the large mammals enjoyed their food, too. We fed deer, pigs, cows, donkeys, llamas, and even wallabies, though they are quite shy and don’t get too close. One of the highlights was walking right among many of the animals.

The highlight of the visit was the kiwi enclosure. There is a large building that houses several kiwis (4 when we were there). It is very dark and quiet as you walk along the pathway, which added to the kiwi sighting experience. You can’t get too close, and it may take some perseverance, but we spotted all four kiwis in about thirty minutes. We watched as one active kiwi scratched and prodded the grass with his beak. It seemed like such an authentic experience, and our boys spoke in whispers for a full half hour, which seemed like a miracle in itself. No pictures allowed in the enclosure.

We spent between two to three hours at the Willowbank Wildlife Reserve and had a great time. If you’re in Christchurch, set aside the time to visit. You can also search the name of any city on the South Island in our search box to find other New Zealand adventures.