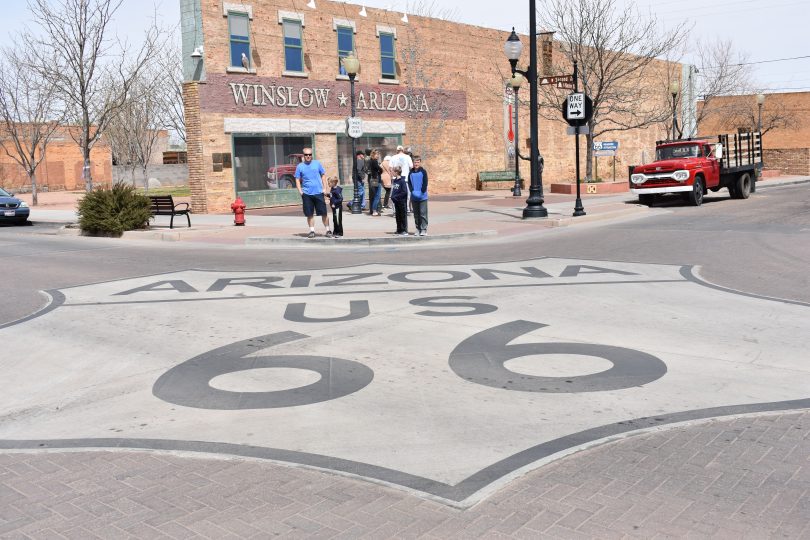 Well I’m standing on the corner in Winslow, Arizona, such a fine sight to see. It’s a girl, my Lord, in a flatbed Ford slowin’ down to take a look at me.

Jackson Browne and Glenn Frye wrote those words in 1971, and they became the Eagles first big hit peaking at Number 12 on the chart. These words eventually launched the Eagles to stardom. Browne conceived the idea for the song after his car broken down on Route 66 near Winslow, Arizona, and he was waiting for it to be repaired. (Browne was not a member of the Eagles, but he did record his own version of the song for his second album.)

Take it Easy is now commemorated in downtown Winslow by two statues, one of Jackson Browne (near the intersection with the guitar) and one of Glenn Frye. There is also a large Route 66 Marker in the center of the street. Standin’ on the Corner Park also has a large gift shop next door where you can purchase any type of Eagles souvenir you’d like.

When you visit this piece of rock and roll history make sure to notice the mural on the wall. There is a large painting behind the statues with a few allusions to the moment. You’ll see an eagle perched on a window sill, which obviously represents the band. There is also a series of windows with a reflection. The reflection is a blonde in a Ford. In the upstairs window, a member of the band and the same blonde can be seen.

If you’re driving Historic Route 66, or if you’re an Eagles fan, don’t miss this tribute to their very first hit song! Standin’ on the Corner Park is a fun and unique stop in Arizona. We spent about 30 minutes here.

Winslow, Arizona is located in northeastern Arizona. We visited this corner when we took a trip to Petrified Forest National Park. The Standin’ on the Corner park is located at 100 E Second St, in Winslow.