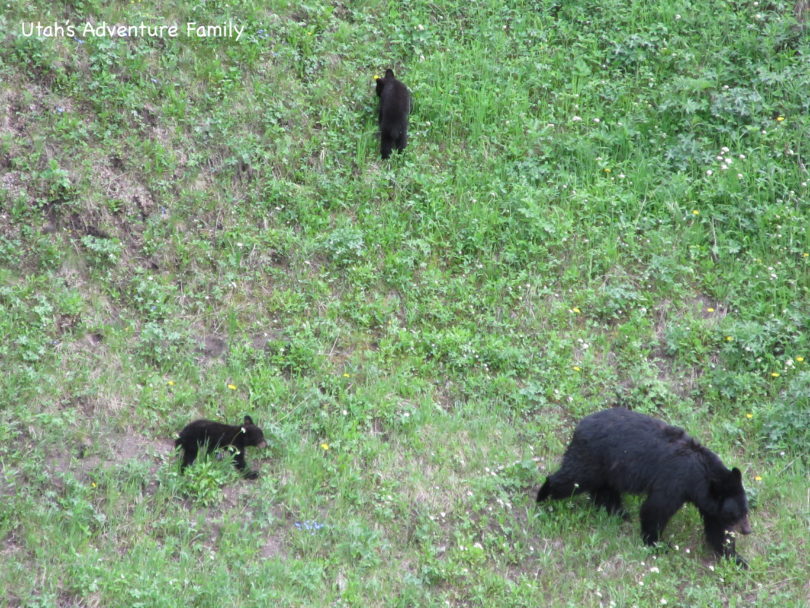 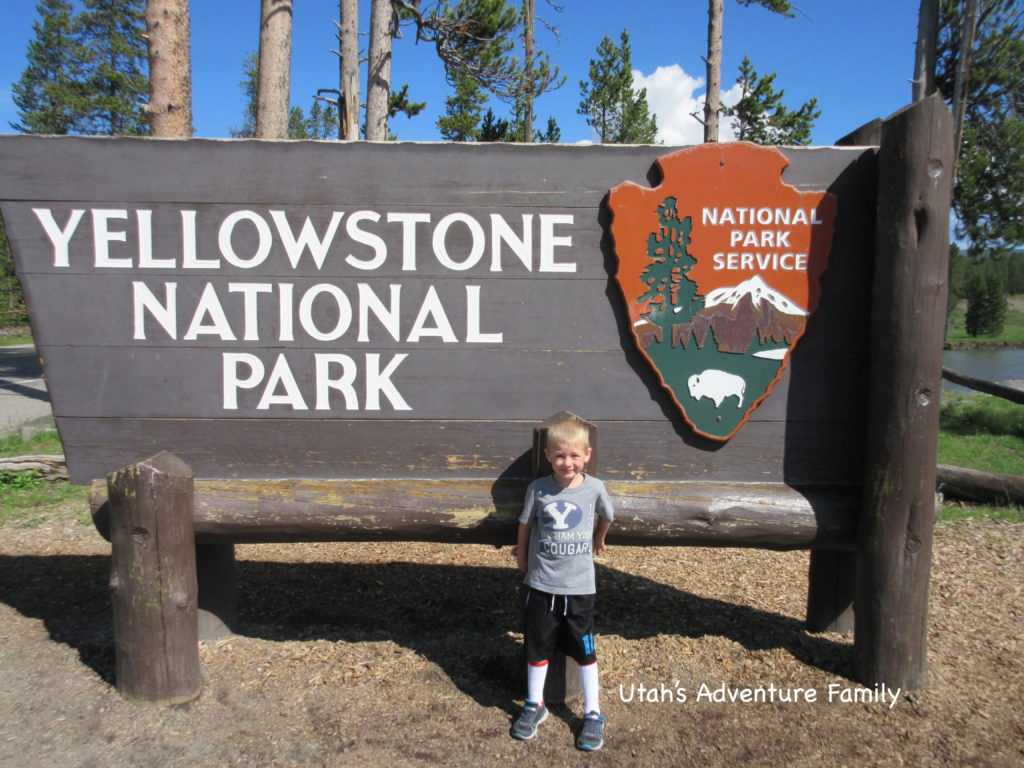 This guy has been to Yellowstone 4 times, including one as a 3 month old. He LOVES it!

In 2003, the summer after we got married, we decided to go to Yellowstone. We loved it so much that we vowed we would go every other year. Since then, we’ve spent a few days in Yellowstone in every odd numbered year.  We have a lot of people ask us about Yellowstone and what to do there, so we are writing a series of posts about things to do in Yellowstone with children.

Yellowstone provides three awesome activities with children. These include: Waterfalls, Animal Viewing, Geothermal Siteseeing like Old Faithful, Scenic Drives, and Hiking. We’ll cover each of these topics, starting with animal viewing here. We want to be thorough, so we’ll give you all the animals that you are likely to see, where to see them, and our Animal Bingo Sheet, which you can download for free and let your kids play in the car. You can also check out and download some of our itineraries (Itinerary Sample 1 or Itinerary Sample 2)!

Before I start going through animals in the park, let me give a brief disclaimer: Nothing is guaranteed, and though we speak from a lot of experience, you may or may not see any of the following animals. But you can increase your chances!

Bears: The first thing people ask us when we return is if we saw any bears, and we always see around a dozen. Bears have made a huge comeback and both black and grizzly bears are easily seen. This year (2015) we saw 16 bears in 2 and a half days. If you’d like to see bears, head up to the northeastern section of the park. Most bears are seen around the Roosevelt junction. We drive up through Dunraven Pass from the Canyon/Lake area early in the morning and spend the day exploring the area. The drive out through Lamar Valley, which is along the road that leads to the northeast entrance and Cooke City is a hot spot for bears. Spend a half day from 7am-1pm near Tower/Roosevelt and you’ll see some bears. Hayden Valley (the valley between Canyon and Lake) has bears, too, so you may luck into a few there. Chances: High 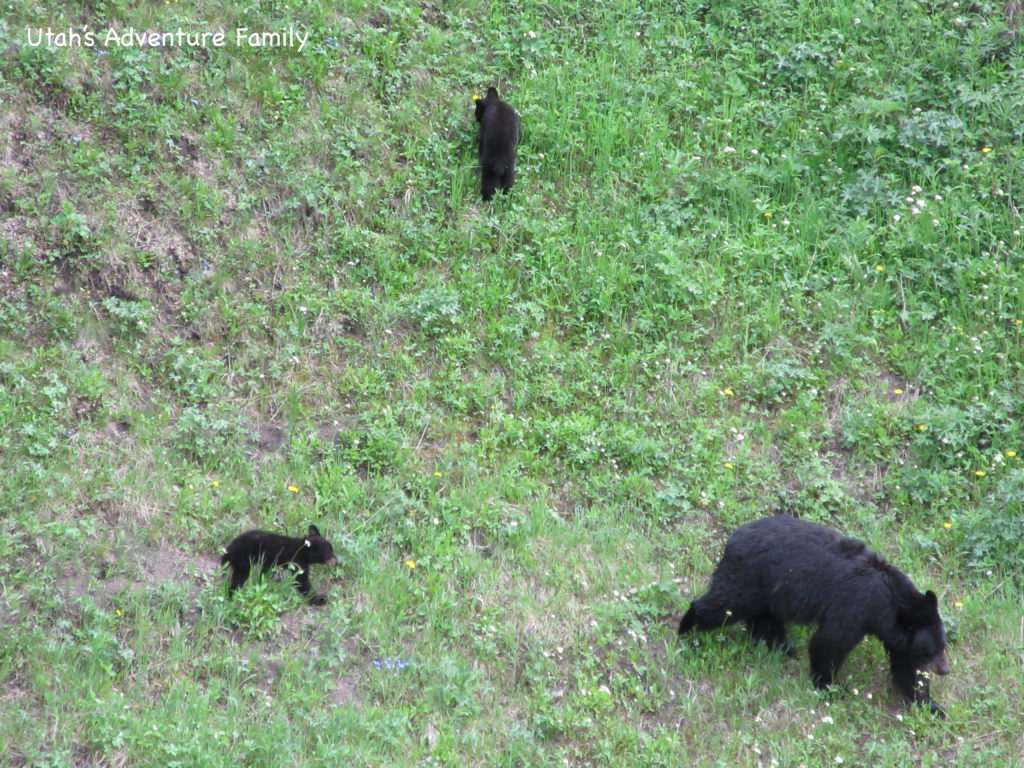 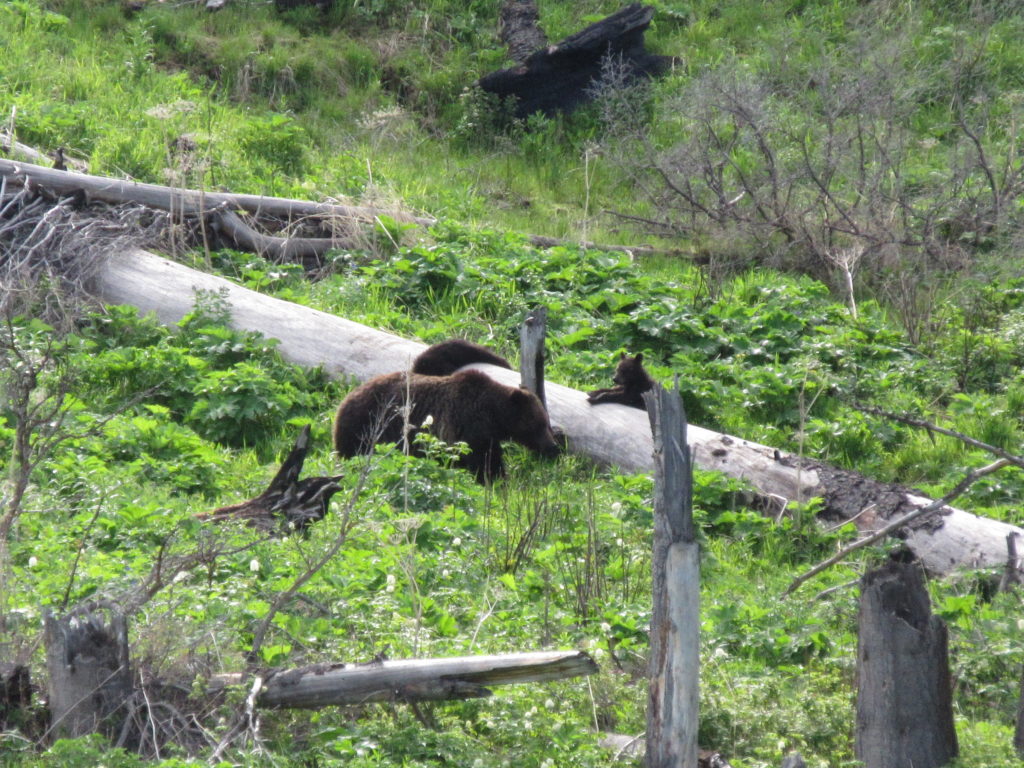 Wolves: If you’re going to see any wolves, you have to head up to Lamar Valley. As you can see from the wolfpack map, wolves are all over up there. Luckily, you’ll be in the area looking for bears. Though we’ve been within 10 feet of bears (with the windows rolled up and cringes on our faces), we’ve never seen the wolves at closer than 150 yards or so. Make sure you have a good set of binoculars. Chances: Medium 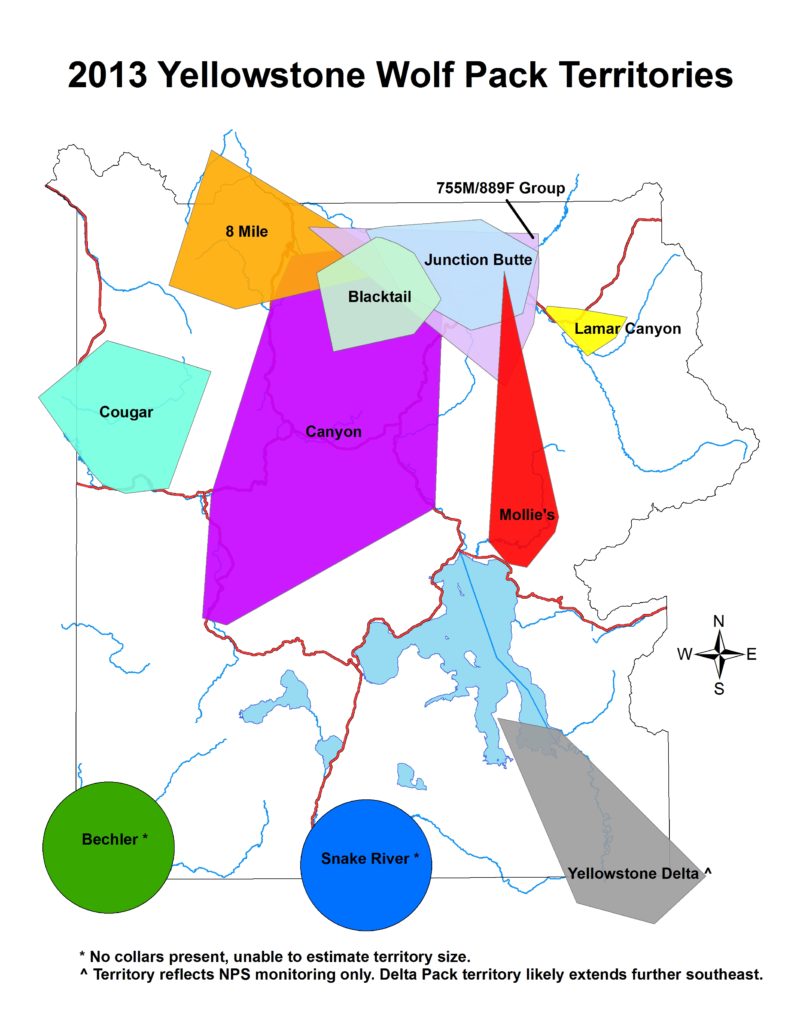 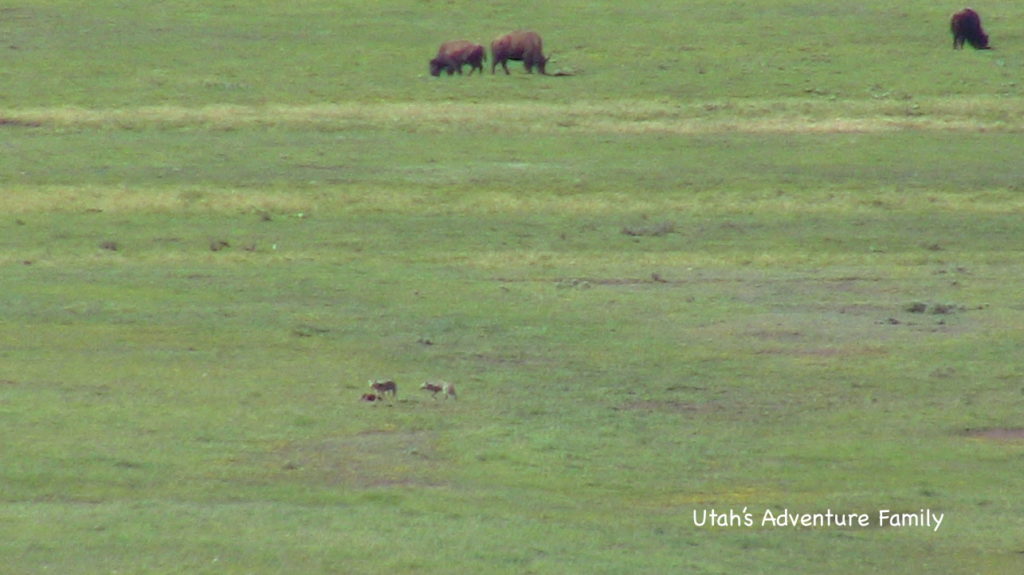 You can never get very close to wolves. There are two wolves out there eating a carcass–awesome right?

Mountain Goats: Mountain goats are pretty tough to see. There are only 2 places that you can really make an effort, otherwise, you just have to be lucky. The best spot is way out by Cooke City. There are usually a few diehards with spotting scopes set up, but you’ll be looking at them at 1,000 yards or more. The second, and closer site is near Tower Waterfall at a turnout called Calcite Springs. Climb the steps and search the opposite mountainside. We’ve seen the goats there at times. Chances: Very Low 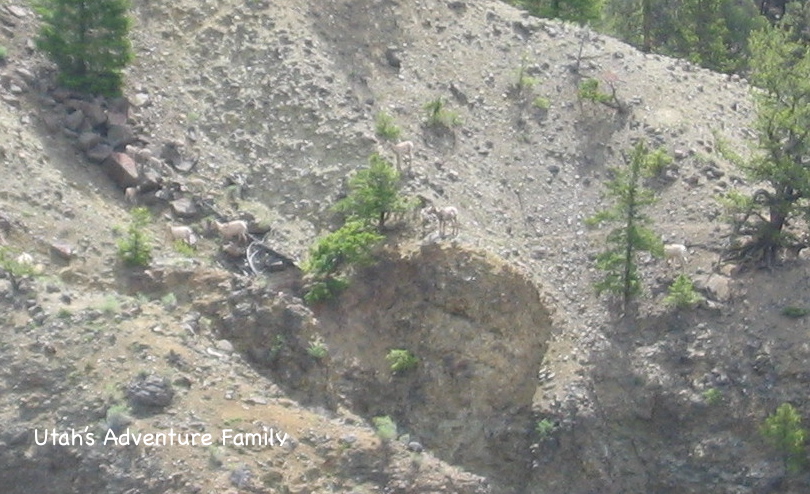 Can you spot the mountain goats?

Moose: We haven’t seen moose in the park in several years. Some people luck into them (in 2011 we say a calf and her cow in the pond at the Canyon Junction). I’ll give you the line the rangers give us: You’ll have to go to Grand Teton National Park to see those. Chances: Very Low 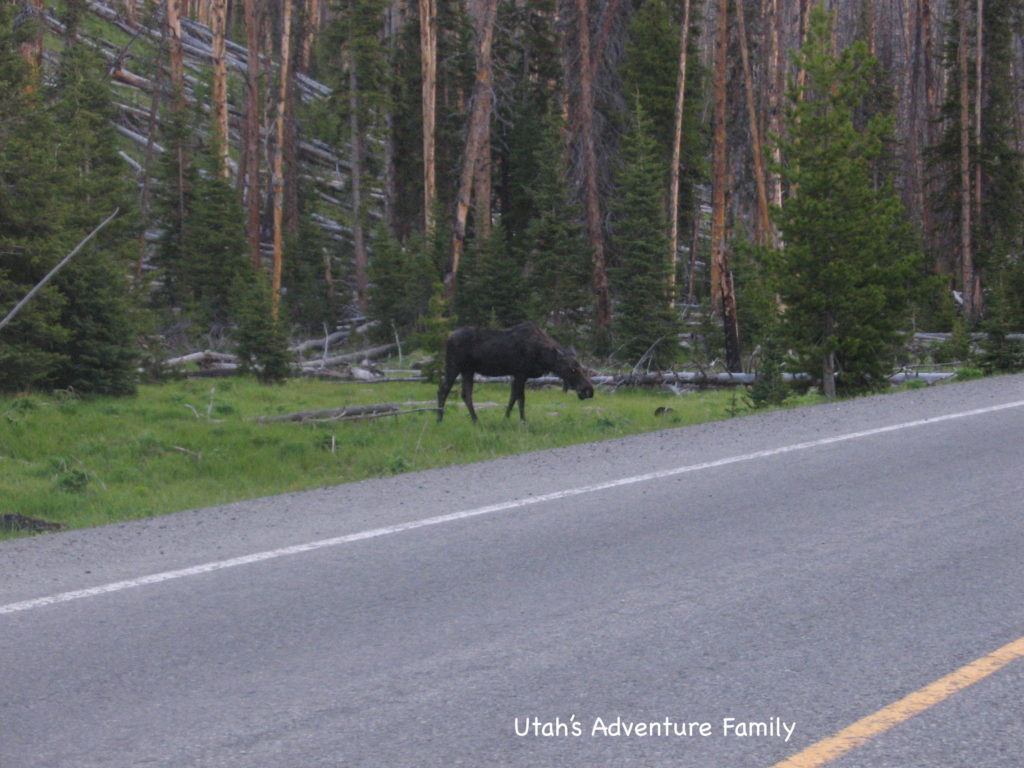 This is the last moose we saw in Yellowstone and it was 4 years ago.

Buffalo: Remember when I wrote a disclaimer with no certainities. I lied. You’ll see buffalo in every part of the park. You’ll stop slowing down and looking at them. They’ll annoy you. Chances: Very High 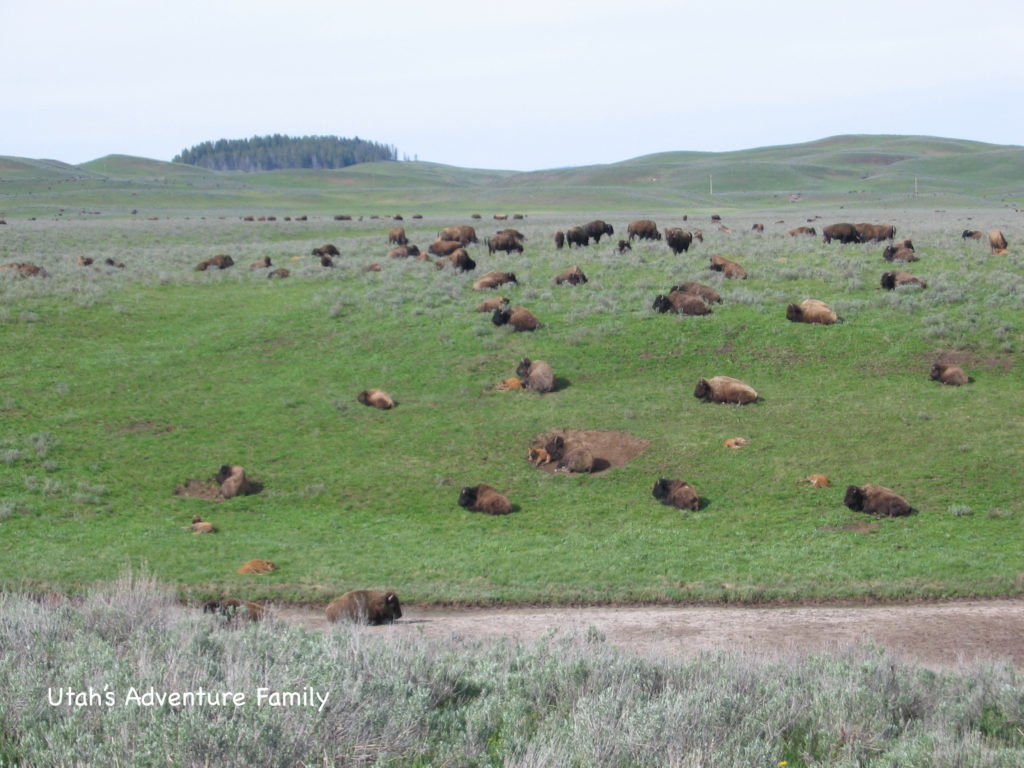 Big Horned Sheep: These are also pretty hard to spot. We were lucky this year and saw them lounging just off the road near the Roosevelt Junction just west of Tower Falls. The only other place we’ve seen them is at Canyon clinging to the walls near Lower Falls, and that was rare and very far away. Chances: Very Low 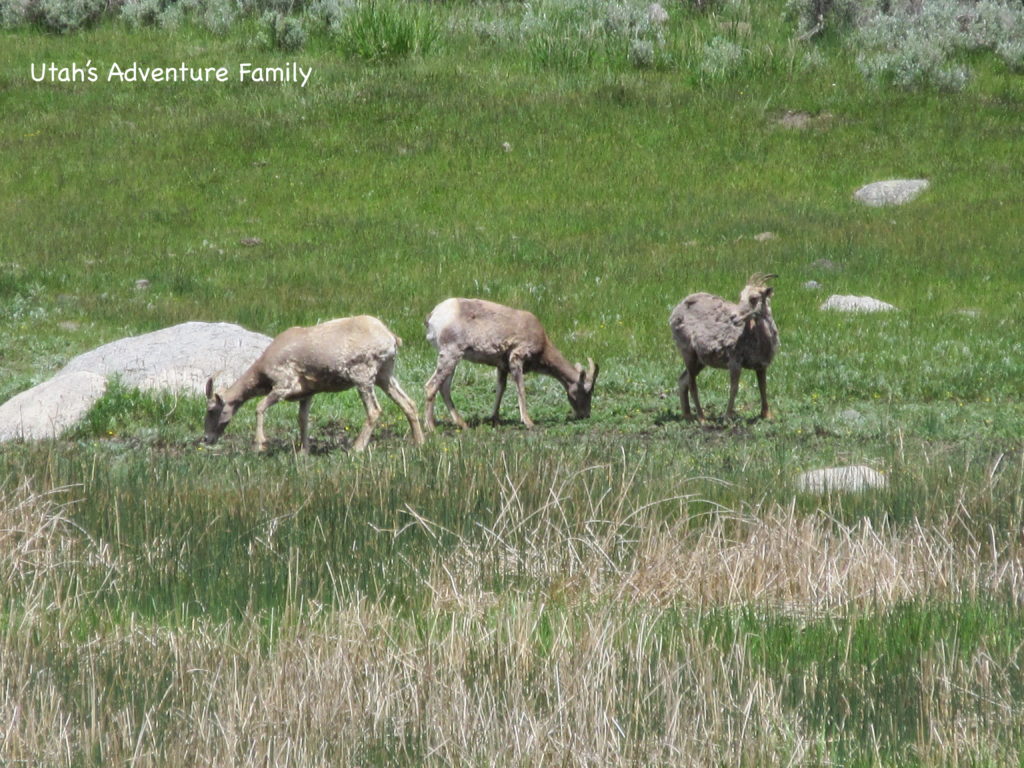 We were lucky and saw a few bighorn sheep by the side of the road. The last time we saw them they were about 5 miles away up on a mountainside–tiny specks.

Pronghorn Antelope: Pronghorn are found mostly in the northeast part of the park near LaMar Valley (are you recognizing a pattern yet?). They are pretty easy to spot most years. Chances: High 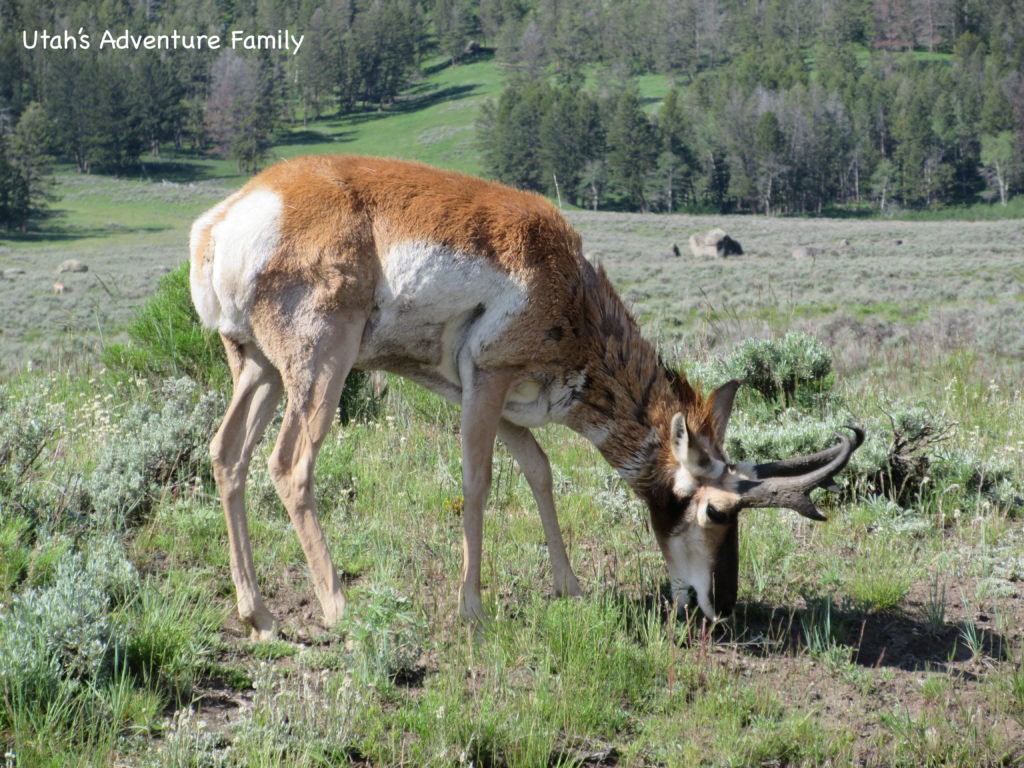 This year the pronghorn were right by the road.

Elk: It’s not very difficult to see elk. We usually see a bunch in the Canyon and Lake areas in the eastern side of the park. That being said, we really have seen these in all parts of the park. Sometimes you’re lucky enough to see a calf or huge bulls, which often come in groups of 2 or 3. Chances: Very High 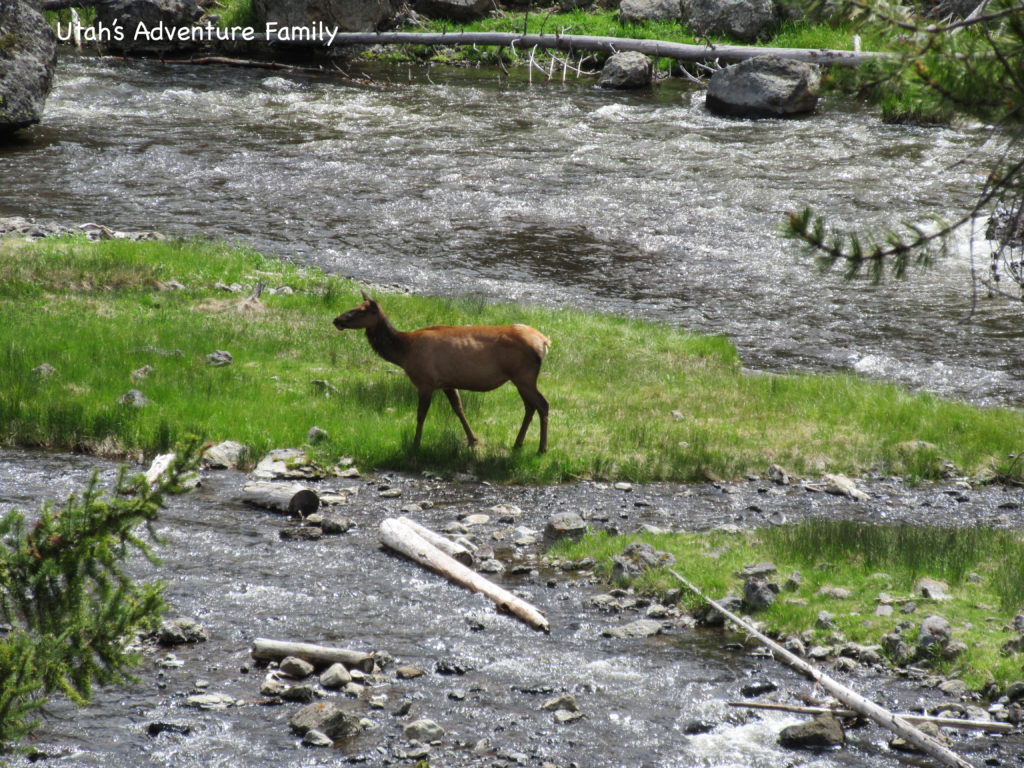 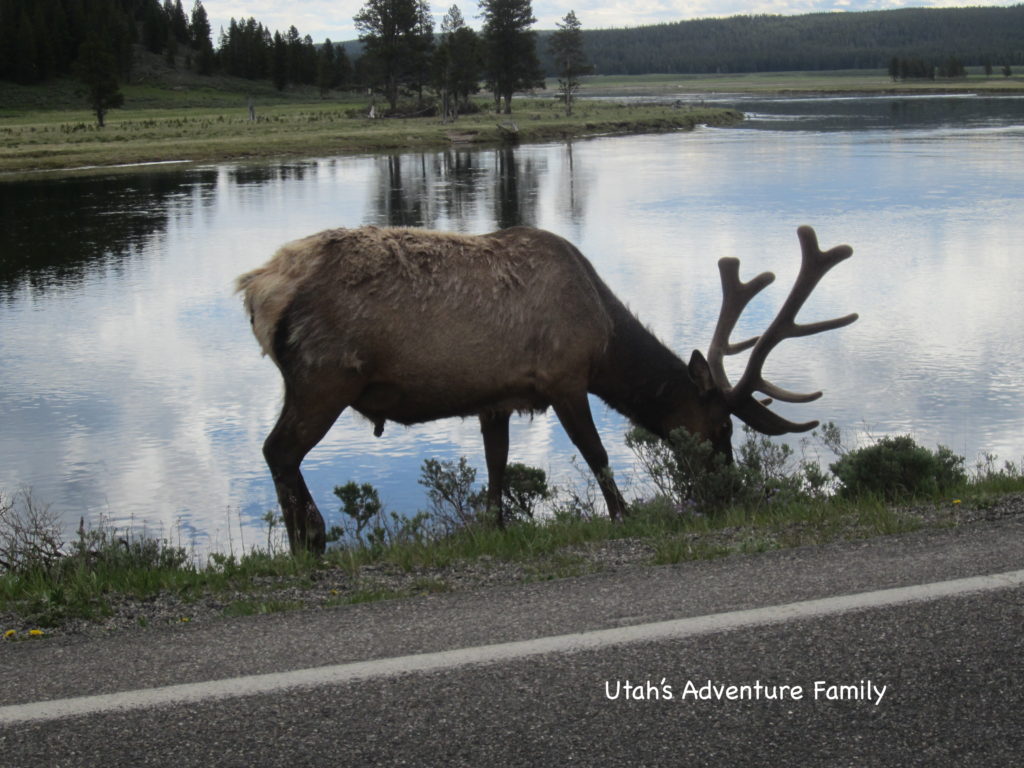 Deer: Mule deer are seen throughout the park. We’ve never really seen white-tailed deer in the park, though we’ve talked to a lot of people who claim to have seen deer with white rear-ends and long ears (which are mule deer). Chances: High 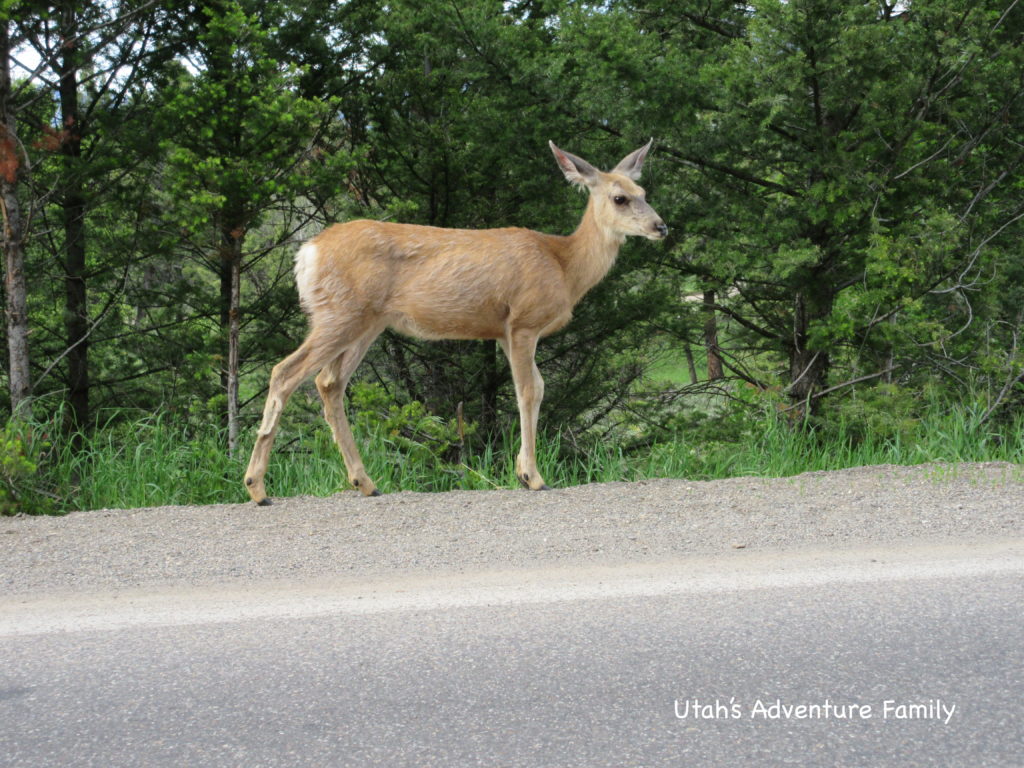 Mule deer…the ears totally give it away!

Beaver: Our favorite place to look for Beaver is near Fishing Bridge. Some years, the beaver is sighted there every day. Others, it seems non-existent. Chances: Low 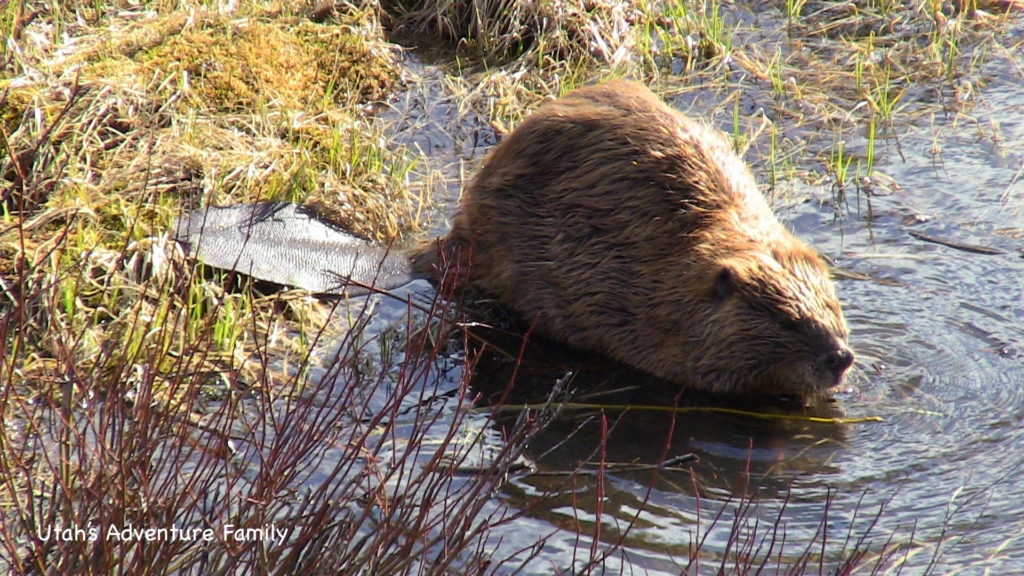 The beaver was right below us on Fishing Bridge. It was amazing.

Yellow-Bellied Marmot: Many people don’t even know what marmots are, but we love these big rodents. They are pretty large, about the size of large cat. If you do the Storm Point hike near Fishing Bridge there is a whole colony of these fellows. They can be seen anywhere in the park, though. Chances: Medium 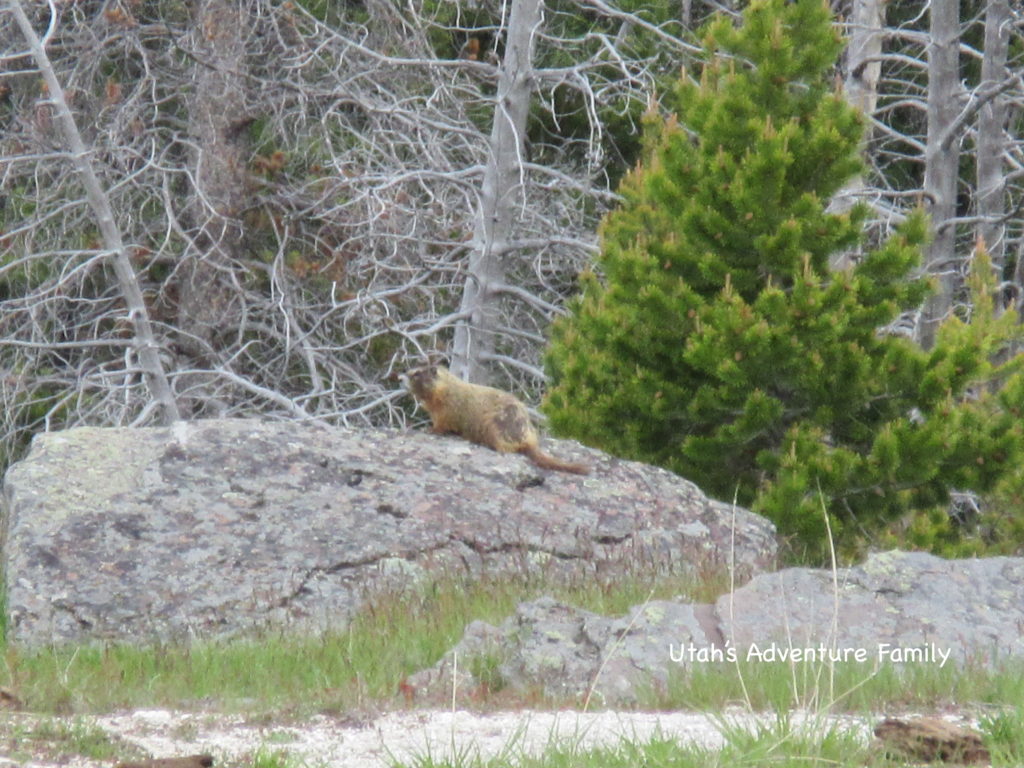 We saw this guy at Old Faithful. Marmots are in all parts of the park.

Coyotes: Coyotes are all around the park. We’ve usually seen them in Lamar Valley. This year we saw a den of 5 pups there. But mostly, you just have to be lucky enough to spot one running along the side of the road somewhere. Chances: Medium 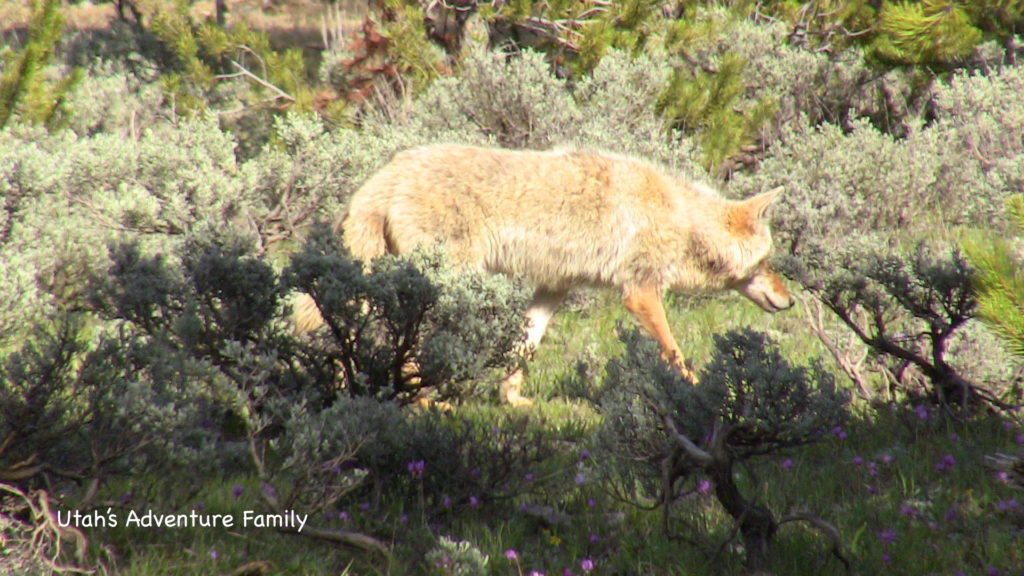 This was a few years ago when he ran by our car.

Bald Eagle: Eagles are increasingly difficult to see at Yellowstone. They used to nest near the West Yellowstone entrance, and we’ve seen them there most years. Lately, though, it’s been more difficult. Chances: Low 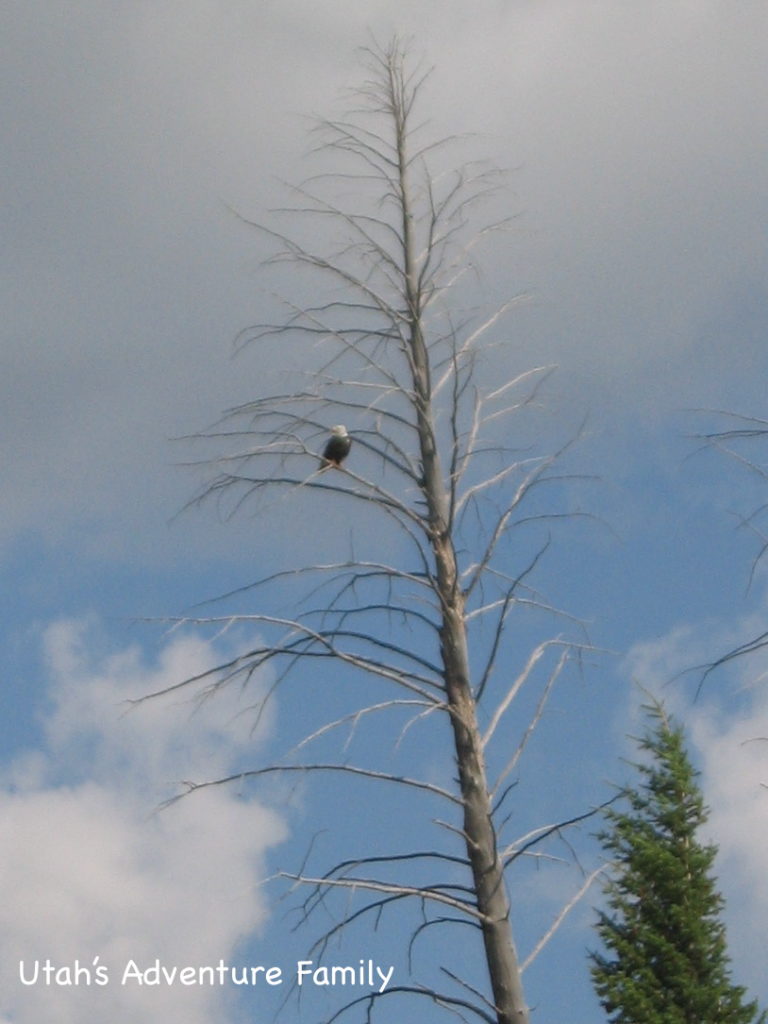 This guy was sitting by the river one year.

Swans: We used to see a lot of swans near the West Yellowstone entrance along the riverside drive. Like the eagles, they’ve become increasingly rare. Chances: Low 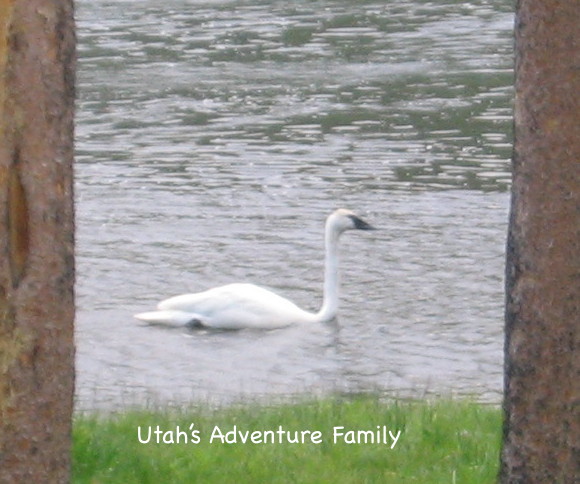 We haven’t seen swans in about 6 years. We see them down by Jackson Hole if we head that way, but they aren’t visiting Yellowstone as much now.

Osprey: Osprey, which some people mistake for bald eagles, can be easily spotted at Canyon. Near the Lower Falls overlook, there is a nest. This year there were 2 osprey and 3 eggs in the nest. We’ve seen it every year. When you get to the overlook, walk about 30 steps down the path– just far enough you can still see your car. Then look down and left at the pinnacles of rock climbing from the valley (if you can see lower falls, you went to far). The nest is on one of those pinnacles. We often see Osprey near Old Faithful as well flying around the rivers there. So keep an eye out in that part of the park, too! Chances: High if you can find it! 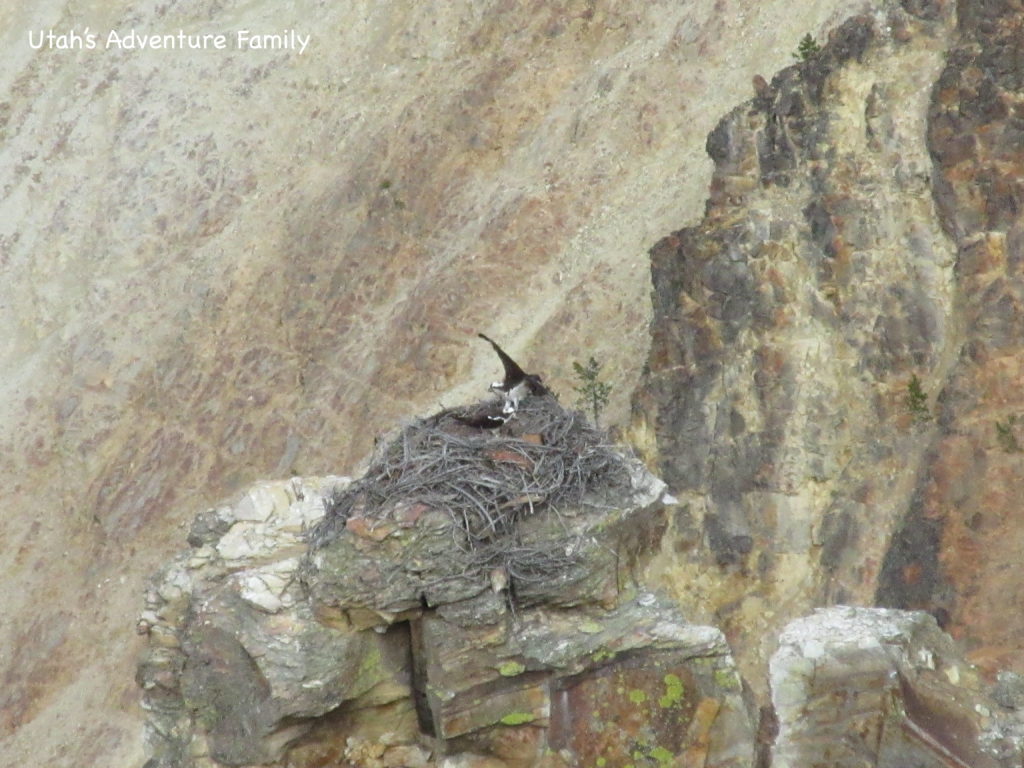 The Osprey is landing in the nest next to the other Osprey who is sitting on the eggs. This nest has been there our last two trips.

Otter: Our favorite place to look for otters is at Trout Lake in the far end of Lamar Valley. We’ve seen them in the Yellowstone River, too. Chances: Low 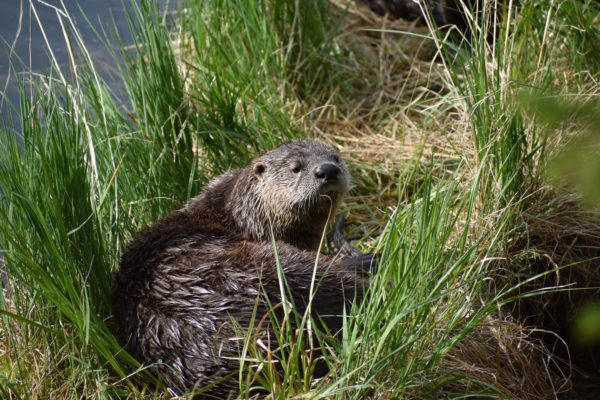 We spotted 4 otters sitting together at Trout Lake.

Fox: We’ve rarely seen foxes in Yellowstone, though we’ve seen them outside the park on several occasions. Both times that we saw a fox in Yellowstone it was near the Yellowstone Picnic Area in LaMar Valley. So when you are in that area, keep an eye out! Chances: Very Low 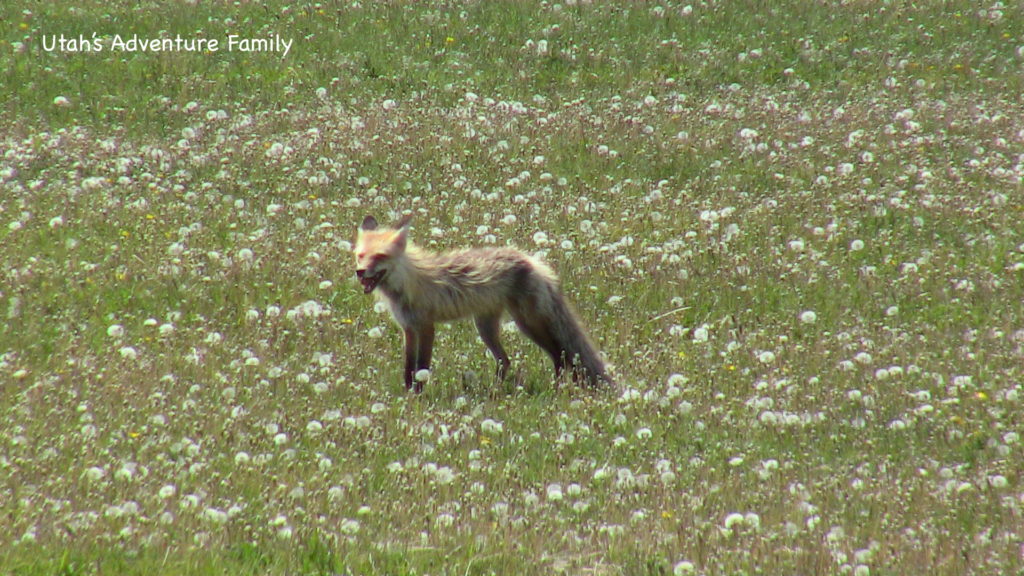 This was one fox that we did see in Yellowstone, but as mentioned above, we usually see them outside of the park.

Badger: Badgers are difficult to see because they are so small. We’ve seen them several times in Lamar Valley. You can consider yourself lucky if you manage to find one. There are no pictures of badgers. We have never caught one on camera. They are too quick for us! Chances: Low

Rabbits: When we hike we see Snowshoe Hares. You won’t see them from the car much. We saw several on the Duck Lake hike, and we have seen them on lots of other hikes, too. Chances: Medium 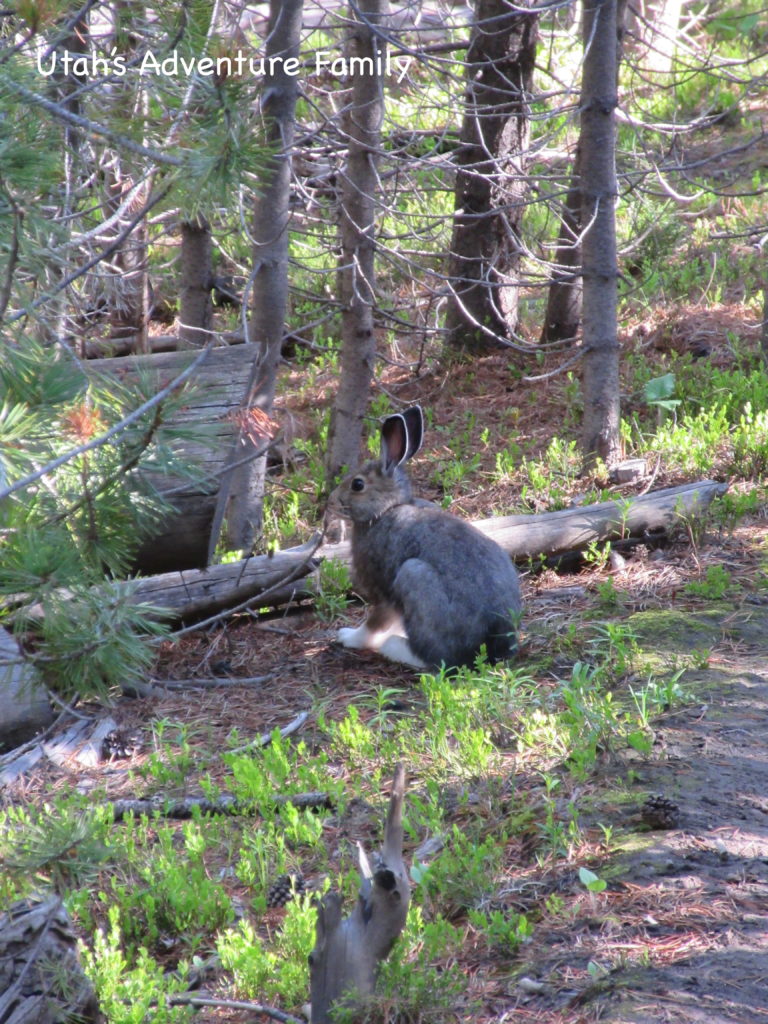 We usually spot a bunny on a hike. So get out of the car and go hiking! 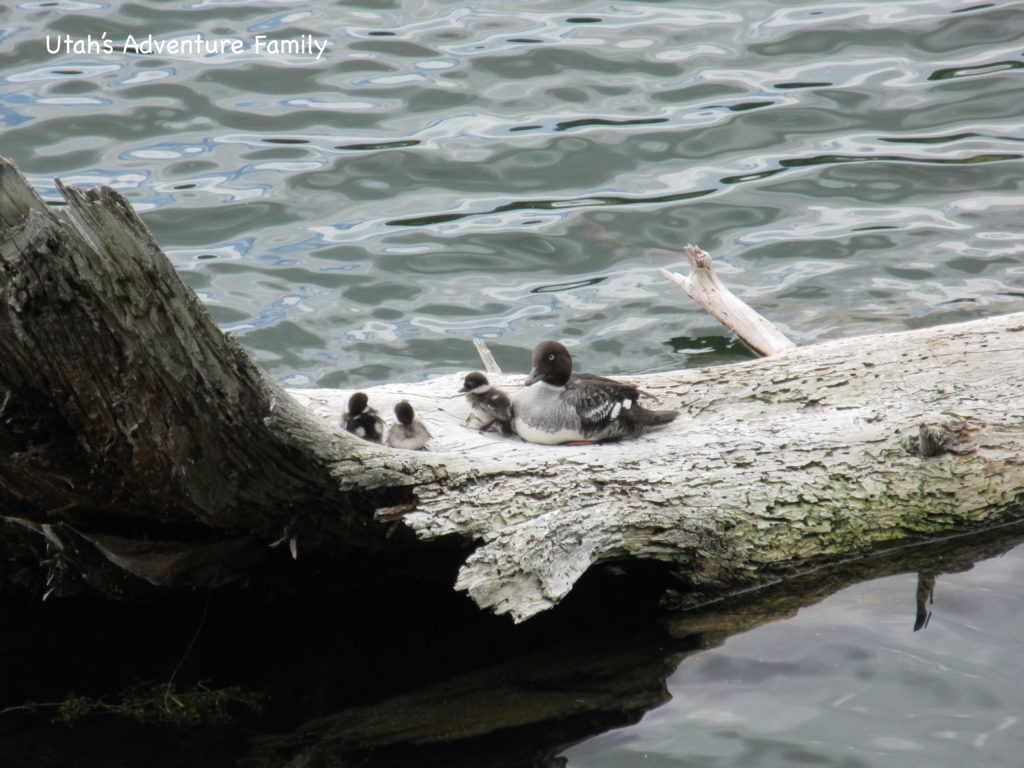 We were in love with these birds–Barrow’s Goldeneye with three little chicks. Adorable!